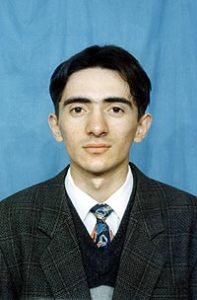 In June 2004, Ruslan Sharipov fled Uzbekistan on his way to a work camp after receiving a two-year community service sentence. In October 2004, he obtained political asylum in the United States and is now living in California.

Ruslan Sharipov was one of several dozen students chosen to participate in a government-sponsored exchange program with U.S. universities in the fall of 1999. When Uzbek authorities canceled that program before he could complete his studies in the United States, Sharipov returned home and became a journalist voice against human rights violations of the Uzbek government. He was a correspondent for the Russian press agency Prima and president of the Independent Journalists Association of Uzbekistan.

In August 2001, he published a series of articles denouncing the repression of Muslims in the country and was also making an investigation into the suspicious deaths of a number of opponents. On August 31, he was taken in for questioning by agents from the National Security Service who accused him of being involved with a terrorist group. Following these incidents Ruslan Sharipov requested, in an open letter to the Uzbek president, an end to being tailed by the security services, an end to pressures being made on his family, and that he may be allowed to pursue his profession as an independent journalist. In 2002, he was physically attacked three times, once by police and twice by unidentified individuals. Sharipov was not silenced by his government and the threats against him and his family continued as he became a more vocal human rights journalist.

Sharipov was arrested on May 26, 2003, in Tashkent with two colleagues on suspicion of having committed homosexual acts. He initially denied the charges. However, on August 8, he changed his plea to guilty, dismissed his legal team and asked that his mother (the trial’s only outside witness) be removed from the court. The journalist and activist also offered to plead for forgiveness from President Islam Karimov and retract all the Internet articles he had written between 2001 and 2003 in which he had criticized the government. On August 13, 2003, an Uzbek court sentenced Sharipov to five and a half years in prison.

Sharipov is reported to have told his lawyer afterwards that he was coerced by law enforcement officers into taking these actions for his own safety and that of his legal team and his mother. Nevertheless, he was found guilty under Articles 120, 127 and 128 of Uzbek law, all of which condemn homosexual acts despite the fact that forensic medical tests conducted after his arrest found no evidence that he had had sexual relations with the minors.

On September 5, 2003, Sharipov addressed an appeal to United Nations Secretary General, Kofi Annan. In this letter, he describes being subjected to torture and threats while in pre-trial detention, and which he claims led him to confess to the charges of sodomy, sexual encounters with male minors, and procuring prostitutes. Sharipov’s claims include that he was forced to write a suicide note in case “I would kill myself … If I would write further appeals or complaints”; that he had a gas mask placed over his head and unknown substances sprayed into his throat; and that he was threatened with being injected with the AIDS virus.

Ruslan Sharipov appeared at his appeal hearing on September 25, 2003, with suspicious facial injuries that authorities maintain were sustained in a vehicle accident on the way to court–an accident in which only Sharipov allegedly sustained injuries. Mr. Sharipov had specifically requested not to be transported to his appeal hearing, for fear he might be abused in transit.

Although the charges of inappropriate behavior were dropped at this appeal hearing, the other charges were upheld and the sentence was reduced by only one year.

Tony Kushner on Ruslan Sharipov and Human Rights in Uzbekistan