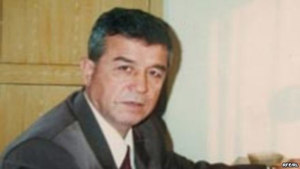 On April 19, 2013, Uzbek writer and activist Mamadali Mahmudov was released from prison after serving a 14-year sentence on charges of “threats” to the president and the constitutional order.

Mamadali Mahmudov is a renowned writer and opposition activist. His first major work, entitled Immortal Cliffs and published in 1981, relates the hero’s dream of uniting the Turkic peoples and fighting the invading Russians of the late nineteenth century. Initially, the story was believed to follow the Soviet criteria for “socialist realism.” Beneath the literal meaning of the work, however, Mahmudov very much rebelled against the censors, and helped lay the foundation for Uzbek national self-awareness in the late Soviet period; Soviet rulers belatedly realized this alternative reading of his story, and in the mid-1980s pressured Mahmudov to issue a retraction. Refusing to renounce the work, he responded with only a vague public statement. Following the collapse of the Soviet Union, Immortal Cliffs retroactively won Uzbekistan’s Cholpan Prize.

Mahmudov supported Erk, a political party founded by fellow writer Muhammad Salih, in the 1991 presidential elections. When Erk lost the election to President Karimov, the party was officially banned, and its proponents have been persecuted ever since. In 1994, Mahmudov was arrested for embezzlement and abuse of office and sentenced to four years’ imprisonment, charges that were considered fabrications at the time by PEN and Amnesty International. Following an international campaign on his behalf, Mahmudov was released early in a presidential amnesty.

On February 19, 1999, Mamadali Mahmudov was one of several individuals arrested after a series of explosions in Tashkent earlier in the month. Agents of the Committee for National Security stopped him and his wife in their car, and after she was let out, drove off with him to an unknown destination. Mahmudov’s wife and daughter heard nothing of him or his whereabouts until May, when he “reappeared” in prison. He and five others were brought to trial on the basis of their possession of banned copies of the Erk newspaper, which resulted in charges of “threats” to the president and constitutional order. They were also cited for participation in a “criminal society” and using the mass media to publicly insult the President of Uzbekistan. At the trial, Mahmudov testified to having been tortured under interrogation including beatings, electric shock, and threat of rape of female family members. It is believed that the bombing was used as a pretext to arrest those associated with the Erk party and its exiled leader Salih, who was convicted in absentia of orchestrating the bombings.

In August 1999, Mahmudov was sentenced to 14 years’ imprisonment; the other five arrested received sentences ranging from eight to 15 years in jail. The detained individuals were forced to sign self-incriminating statements, and some were coerced to declare their guilt on a government-sponsored national television program.

Prison conditions proved to be a problem for Mahmudov, and around March 2001, he was transferred from Navoi prison to the medical center at Tashkent, and subsequently moved to Chirchik prison where the conditions are said to be less harsh than at Navoi. Years later, in October 2012, he reportedly sustained an injury to the back of his head, and received several stitches on October 26. His daughter reported that when she visited him the next month, he was extremely weak.

In February 2013 Mahmudov he was taken to from the Chirchik Labor Camp to a detention center in Tashkent, where he was informed on March 5 that a new criminal case was being opened against him. On April 8, he was sentenced to three years’ additional imprisonment for “breaking prison regulations.” He had appealed against this new sentence and was waiting for the response when he was unexpectedly released on April 19, 2013.

PEN considers that Mamadali Mahmudov was detained solely for exercising his right to free expression as guaranteed by Articles 19 and 22 of the United Nations Universal Declaration of Human Rights, and called several times for his unconditional release prior to April 2013.

Mamadali Mahmudov is a recipient of the 2001 PEN/Barbara Goldsmith Freedom to Write Award.

Writer Mamadali Makhmudov Released After Over 14 Years in Prison