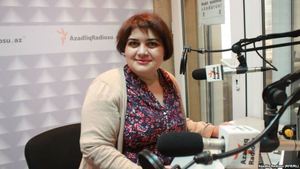 On September 1, 2015, freelance investigative journalist Khadija Ismayilova was convicted on charges of embezzlement, illegal entrepreneurship, tax evasion, and abuse of power in a closed-door trial and sentenced to seven-and-a-half years in prison. On May 25, 2016, Ismayilova was released on probation and granted a suspended sentence in a Supreme Court decision rendered in Azerbaijan’s capital, Baku. However, she remains subject to a travel ban and has not been able to leave Azerbaijan since her release.

Khadija Ismayilova is the winner of the 2015 PEN/Barbara Goldsmith Freedom to Write Award.

Khadija Ismayilova is an award-winning freelance reporter who has worked for various Azeri–, Russian–, and English–language news outlets. She is an outspoken advocate for press freedom and human rights in Azerbaijan and has repeatedly called for the release of dozens of detained and imprisoned Azeri journalists. Her most high-profile journalism work has been with Radio Free Europe/Radio Liberty (RFE/RL), where she worked from 2008 to 2010 as bureau chief and later as a staff reporter. Despite the highly oppressive and government-controlled media environment in Azerbaijan, Ismayilova published several investigative pieces in international outlets exposing official corruption—including reports on alleged embezzlement, secret mining interests, and illegal business ownership by President Ilham Aliyev and his family.

Ismayilova’s reporting on official corruption has made her the constant target of judicial harassment, threats, and personal smear campaigns.

May 7, 2020: The European Court of Human Rights (ECHR) rules for the third time in favor of Ismayilova, determining that the Azerbaijani state failed to protect her right to privacy when it did not sanction a local newspaper for making illicit claims about her private and sexual life. Azerbaijan is ordered to pay Ismayilova 6000 Euros in damages.

February 27, 2020: The European Court of Human Rights rules against the Azerbaijani government in their detention of Ismayilova, ordering Azerbaijan to pay Ismayilova 20,000 euros. The Court also decides that her arrest violates the right to liberty, the right to a presumption of innocence, and the prohibition of misuse of power as outlined in the European Convention on Human Rights. The Azerbaijani government still has yet to pay Ismayilova in accordance with a previous ECtHR January 2019 ruling.

February 11, 2020: Shortly after Azerbaijan’s February 9th snap parliamentary elections, Ismayilova is physically assaulted while covering a protest outside the Central Election Commission in Baku, Azerbaijan’s capital, obstructing her reporting. Demonstrators and journalists are violently dispersed by special forces, and at least nine journalists, including Ismayilova, are beaten and arrested.

February 6, 2020: Ismayilova posts on Facebook and Twitter that the Supreme Court has dismissed her application to end her probation and thus her travel ban, one of the conditions of the probation.

August 9, 2019: The Azerbaijani Supreme Court upholds the groundless tax evasion charges against Ismayilova. Her previous employer, RFE/RL’s president Jamie Fly urges “Azerbaijani authorities to remove the ban on her travel, drop the groundless tax penalties she faces, unfreeze her bank accounts, and allow her to resume a normal life and her important work.”

January 10, 2019: European Court of Human Rights rules that the Azerbaijani government violated freedom of expression laws and failed to investigate privacy violations in Ismayilova’s case. The court ruled that Azerbaijan must pay Ismayilova damages of 17,000 euros.

January 30, 2018: Baku Court of Appeal holds a hearing on the appeal of the travel ban on Khadija İsmayilova and rules to uphold the ban. İsmayilova had been invited to Sweden to receive an award from the Right Livelihood Award Foundation for her work as a human rights defender. Ismayilova brings the ceremony invitation letter to be used as part of the hearing but the court does not allow the letter to be considered. This is the third time that the court refuses to lift her travel ban. Ismayilova proceeds by appealing the Court of Appeal’s verdict with the Supreme Court.

December 2017: Ismayilova is unable to receive her Right Livelihood Award in person due to her travel restrictions. David Kaye and Michel Forst, UN Human Rights Council experts, state on December 5th that “the measures against Ismayilova by the authorities go far beyond what is legitimate. It is detrimental to her individual case and also to the exercise of independent journalism in the country.”

September 2017: Ismayilova is named one of the 2017 recipients of the Right Livelihood Award – often referred to as the “Alternative Nobel Prize,” which honors daring endeavors in human rights, public health, and good governance.

February 2017: Ismayalova’s internet and phone services are temporarily shut off just as she was scheduled to speak via conference call at a European Parliament panel discussion on human rights violations in Azerbaijan. Ismayilova is seeking a full acquittal.

May 2016: Ismayilova is released on probation and granted a suspended sentence in a Supreme Court decision. The Supreme Court drops the charges of embezzlement and abuse of power and changes the sentence to a 3.5-year suspended term, upholding charges of tax evasion and illegal business activity. She must now live in Baku while on probation, and is subject to a five-year travel ban. Ismayilova continues to face government harassment.

December 2015: To mark the one-year anniversary of Ismayilova’s arrest, nearly 70 journalists, researchers, and supporting organizers convened in Turkey to recommit to finishing the anti-corruption work and writings that Ismayilova started. The stories can be found here.

July 2015: The first hearing for her trial is on July 24. On August 21, the prosecution requests a nine-year prison sentence. On September 1, 2015, Khadija Ismayilova is convicted on charges of embezzlement, illegal entrepreneurship, tax evasion, and abuse of power in a closed-door trial and sentenced to seven-and-a-half years in prison. On November 25, an Azerbaijani appellate court upholds the guilty verdict against Ismayilova, confirming her sentence. Ismayilova is acquitted on a previous charge of inciting a colleague to suicide after the accuser recanted his allegation.

February 2015: On February 13, 2015, the Azerbaijani Prosecutor General’s Office also charges Ismayilova with embezzlement, illegal entrepreneurship, tax evasion, and abuse of power. Khadija is convicted in a closed-door trial on February 24 on separate charges of libel and criminal defamation after she posts on Facebook an apparent contract from the Ministry of National Security hiring an informer to infiltrate the political opposition.

December 2014: On December 5, 2014, Ismayilova is arrested and placed in pre-trial detention for two months in connection with charges that she incited a former colleague to commit suicide after she allegedly pressed RFE/RL’s editorial staff not to rehire him—allegations her editors deny. Her detention is extended twice.

2013: Ismayilova is detained after she participated in an unsanctioned protest against police abuse. Arguing that she broke no law, she refuses to pay the 500 manat fine leveled against her and is instead sentenced to 220 hours of community service sweeping the streets. Ismayilova dubs her community service “Sweeping for Democracy,” and a number of her social media followers pledge to join her, at which point the government attempted to change her community service to a less-public venue, cleaning at a rehabilitation facility. When Ismayilova refuses, the government threatened her with three months in prison.

2011: A camera secretly installed in her home films Ismayilova and her boyfriend during an intimate moment—the footage is later used in an attempt to blackmail her into stopping her corruption investigations. She refuses, and the video is released on the Internet. Despite Ismayilova’s reporting the threat to police prior to the release of the video, Azerbaijan’s Attorney General’s Office only begins its investigation when the footage was made public. Azeri police have yet to identify and prosecute those responsible.

“We need to build a new reality where truth will be a norm of life and telling the truth will not require courage. You all know why I am here in prison. Uncovering corruption is the real reason. And the only way to prove oppressive regimes wrong is to continue uncovering corruption, to continue defending the rights of oppressed people. Yes, there is a price to pay. But it is worth it!—Khadija Ismayilova in “A Letter from Azerbaijani Prison”

“A Letter from Azerbaijani Prison”
“If I Get Arrested”
“Baku’s Deep Pockets for Art Abroad Contrasts With Restrictions Contrasts at Home”
“Azerbaijani President’s Family Benefits from Eurovision Hall Construction”
Letter from an Azerbaijani Jail: Khadija Ismayilova Speaks Out

A Thank You From Khadija Ismayilova

One Year On: Khadija Ismayilova’s Unjust Arrest and Sham Trial

A Thank You from Khadija Ismayilova

Ruling Against Azerbaijani Journalist Part of “Relentless Campaign of Harassment”