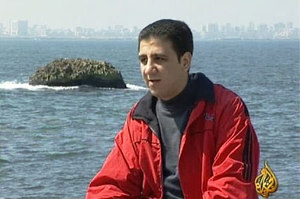 Kareem Amer completed his four-year sentence on November 5, 2010. Instead of being released, however, Amer was transferred from Alexandria’s Borg al-Arab Prison to the State Security Intelligence headquarters, where he was held illegally for ten days and reportedly beaten. He was finally released on November 15, 2010, and though he is said to be in poor health, is now safe at home.

Amer was consistently the target of harassment in prison. Reportedly, in late April 2010, security officers entered Amer’s cell and confiscated his notebooks, which are believed to contain his personal writings, as well as letters of support from people around the world. His books and other reading materials were arbitrarily confiscated in August 2008, and in November 2007, a prison guard and inmates severely beat Amer on the orders of prison officials, according to his lawyer. He was attacked several times thereafter. There are still concerns about his well-being.

Abdel Kareem Nabil Suleiman, better known under the pseudonym of Kareem Amer, is an Egyptian blogger and former al-Azhyar University student known for his secular views and his critical writings about Islam and Egypt’s highest religious authorities. His writings are published online on his personal blog.

Kareem Amer was summoned to appear before the office of the Public Prosecutor in Alexandria on November 6, 2006, after posting articles critical of Islam on his blog. He was charged with “incitement to hate Muslims,” “defaming the President of the Republic,” and “insulting Islam,” and was held on renewable two-week detention orders until his trial began on January 18, 2007.

On February 22, 2007, Amer was found guilty of “disparaging Islam” and “defaming the Egyptian president” and sentenced to four years in prison. Another charge of “broadcasting statements that could disturb public order” was dropped.

The Court of Appeal of Alexandria upheld Kareem Amer’s sentence in its first session on March 12, 2007. The judge also approved a motion brought by 11 lawyers to pursue a civil claim against Amer, which could lead to heavy fines.

This was not the first time that Kareem Amer has been detained for his critical writings. He was held for 12 days in October 2005 for his articles on Islam and his coverage of sectarian riots in Alexandria. These articles also led to his dismissal from al-Azhar University in March 2006 after its disciplinary board found him guilty of blasphemy against Islam.