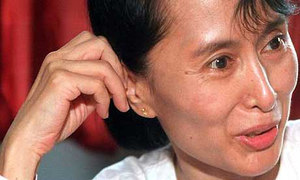 Aung San Suu Kyi was released from house arrest on November 13, 2010, and on November 23, she was reunited with her son after a decade-long separation. She visited the ancient city of Bagan on July 4, 2011, and the city of Pegu on August 3, 2011, both trips accompanied by her son. Aung San Suu Kyi met with the Burmese Labor Minister, Aung Kyi, on July 25 and August 12, and met with the Burmese President Thein Sein on August 19. Her lawyers said that she had been freed with no conditions, but the military has warned Suu Kyi that political tours could lead to chaos and rioting.

Myanmar’s State Counselor and a founding member of the National League for Democracy, Myanmar’s majority political party, Aung San Suu Kyi has held a top civilian leadership position since April 2016. On February 1, 2021, Aung San Suu Kyi was detained amid a military-led coup while acting within her capacity as State Counselor. She has been charged with breaching import and export laws, possession of unlawful communication devices, referring to six walkie-talkies, and breaching a natural disaster law by holding a rally during the coronavirus pandemic. Following her initial detention, she was additionally charged under a section of a colonial-era penal law which prohibits the publication of information that may “cause for alarm” or violate “public tranquility,” and a final charge of “corruption using her rank.”

Aung San Suu Kyi is a writer and pro-democracy activist and daughter of Burma’s independence hero Aung San. After studying at Lady Shri Ram College in New Delhi and St. Hugh’s College in Oxford, she completed her doctoral degree in Oriental and African Studies at the University of London. Suu Kyi returned to Myanmar in 1988 and soon became the face of the pro-democracy movement, helping to found the National League for Democracy (NLD) leading the group as general secretary. Suu Kyi is also the author of many books, including Freedom from Fear (1991), Letters from Burma (1997), and The Voice of Hope (1997).

In 1988, the long-time leader of the ruling Socialist party, General Ne Win, stepped down from power after 26 years, triggering pro-democracy demonstrations throughout the country. Aung San Suu Kyi, as leader of the NLD, gave numerous speeches calling for freedom and democracy. In July 1989, without charge or trial, Suu Kyi was placed under house arrest, where she remained for six years. Despite Suu Kyi’s confinement, in 1990 the NLD won the national election with over 80 percent of the vote. The military junta, however, has refused to recognize the results.

Suu Kyi was released from house arrest in July 1995, but was detained again in September 2000 and held until May 2002. Her freedom was only fleeting. During a tour of northern Burma in May 2003, Aung San Suu Kyi and her supporters were attacked by the regime’s militia in the town of Depayin. As many as 70 people were killed in the attack and over 100 people arrested, including Aung San Suu Kyi, who remained in secret detention for over three months. She was briefly released for a medical procedure in September 2003, but was immediately returned to custody. After her detention was extended by a year in both May 2007 and May 2008, she was scheduled to be released in May 2009, but was formally arrested two weeks before her sentence expired.

Suu Kyi was taken into custody on the morning of May 14, 2009, and immediately transferred to Insein Prison for allegedly violating the conditions of her house arrest after an American citizen swam across a lake uninvited and stayed in her home. Although she reportedly had no direct contact with the man, authorities claim that his presence in her home violates a ban that prohibits her from meeting with anyone without prior permission. Suu Kyi’s trial began on May 18, 2009, and on August 11, 2009, she was sentenced to 18 months of house arrest under Section 22 of the State Protection Law for “subversion.”

Due to the military junta’s monopoly over the political sphere of Burma, a new electoral law bans Aung San Suu Kyi from running in Burma’s next election, which will take place later in 2010. The National League for Democracy (NDL) was banned in May 2010. The NDL called for a complete boycott of the November 2010 elections, which it considered undemocratic.

In April of 2016, Aung San Suu Kyi assumed the position of State Counselor through the passage of a measure approved by the Parliament’s lower house. A founding member of the National League for Democracy party, her position gave her authority to coordinate affairs between the parliamentary and executive branches of government during a five-year term concurrent with the Presidency, while she also acted as minister of the president’s office and of foreign affairs.

In November 2020, the NLD won the majority vote in the general election, and, on January 24, 2021, the Vice President of the NLD announced that Aung San Suu Kyi would assume a second term as State Counselor. On February 1, 2021, Aung San Suu Kyi, while acting in her capacity as State Counselor, was detained amid a military-led coup. Initial charges against Suu Kyi included illegally importing walkie-talkies and violating Myanmar’s natural disaster law, which carry sentences of up to three years in jail. Additional charges of using illegal communication equipment and causing “fear and alarm” were added on March 1, 2021, and a final charge of “corruption using her rank” was added on June 10, 2021. Suu Kyi went on trial in a closed court on June 14, 2021, in proceedings that Human Rights Watch calls “bogus and politically motivated.”