A Review of Charged by Emily Bazelon 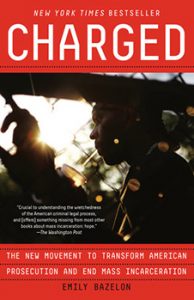 Sowing the Seeds for Change:
A review of Emily Bazelon’s Charged: The New Movement to Transform American Prosecution and End Mass Incarceration
By Amanda Erin Miller

Emily Bazelon’s most recent book, Charged: The New Movement to Transform American Prosecution and End Mass Incarceration, examines the injustices wrought by corrupt prosecution and the role they play in America’s mass incarceration problem. It is essential reading for anyone interested in learning about the holes in the criminal justice system, and those seeking ways to advance tangible reform. Charged tells the stories of two young individuals: Kevin of Brownsville, who was charged with illegal gun possession (the gun belonged to his friend and he claimed responsibility) and Noura of Memphis, who was charged with the murder of her mother despite DNA evidence to the contrary. Bazelon brings us deep inside Kevin and Noura’s respective worlds, then takes us step by step through the incidents that led to their charges and the events that followed: from hearing, to trial, to conviction, to penalty, and beyond.

The personal narratives serve as jumping off points for larger discussions of prosecutorial processes that stand in the way of achieving true justice. First there’s the problem of rampant plea bargaining to avoid the time, labor, and cost of a trial—a whopping 95 percent of felony convictions in America are the result of pressurized plea deals. Prosecutors coerce vulnerable people with limited resources into pleading guilty for a shorter sentence than the length of a sentence for the top charge, which could be the result of a trial. Then there’s cash bail, which ultimately serves as a punishment for poverty—over two-thirds of people in state and county jails are detained while awaiting trial simply because they can’t afford bail. And there’s incessant violation of the Brady Rule, the requirement that prosecutors turn over exculpatory evidence to the defense. In Noura’s case, the assistant prosecutor failed to turn over a note from Noura’s friend that would have exonerated her, claiming he forgot about it until five days after the jury found her guilty, and by then, it was too late. Probation and parole slip-ups often result in gratuitous and heavy handed incarceration—over 4.6 million people in America live under court supervision.

Charged advocates for a new kind of district attorney as the key to reforming the system, one who is intent on true justice over winning. Bazelon addresses the importance of voting for more progressive DAs, highlighting those recently elected and the strategies they have employed to tackle the tremendous bureaucratic obstacles they are up against. Instead of dragging people through a process that makes them more inclined to reoffend under the guise of keeping people safe, Brooklyn DA Eric Gonzalez (elected 2017) states that the job of a DA is to “create conditions for a turning point in people’s lives,” such as diversion programs designed to help individuals get their lives on track. Charged is a compelling read that sows the seeds for real, lasting systemic change.

Amanda Erin Miller is the author of One Breath, Then Another: A Memoir (Lucid River Press, 2013), host/curator of long-running NYC reading/performance series “Lyrics, Lit & Liquor,” and creator of the interactive solo show The Jew in the Ashram. She is a member of the PEN America Prison Writing Committee.