A Blacklisted Screenwriter on American Surveillance 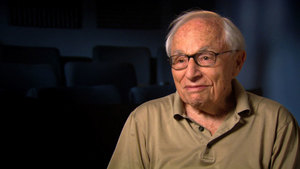 As part of our efforts to confront proliferating surveillance powers in the United States, PEN American Center is working to promote a better understanding of just how surveillance threatens freedom of expression and creative freedom. For some insights on the subject, we turned to screenwriter Walter Bernstein, who was blacklisted and monitored during the McCarthy era. Born in 1919, Bernstein graduated from Dartmouth College and wrote for The New Yorker and the G.I. magazine Yank before turning his attention and talents to film and television; his memoir Inside Out: A Memoir of the Blacklist was published in 1996. Bernstein received a lifetime achievement award from the Writers Guild of America East in 1994, and in 2008 the organization awarded him the Evelyn F. Burkey Award “in recognition of contributions that have brought honor and dignity to writers everywhere.”

PEN’s Larry Siems recorded this interview with Walter Bernstein at his home in New York City on August 21, 2013.

Larry Siems: What was your reaction to the recent revelations about the National Security Agency’s surveillance program?

Walter Bernstein: A lack of surprise. I wasn’t surprised at all that this thing came out. I believe that government conducts this, perhaps not to the extreme that it’s doing now, but it has always conducted surveillance. The rationale being that it’s for national security, basically. So I felt it was always going on, this is just more extreme.

Siems: What questions and concerns do these programs raise for you?

Siems: In what way do these revelations and those questions resonate with your personal experience?

Bernstein: I was blacklisted in the fifties for ten years—ten, twelve years, something like that—and visited frequently by the FBI; I had the feeling, although without any specific proof, that my phone was tapped, knowing that the FBI had been around, talking to the superintendent of the building about people who visited me. They examined my garbage, and they would stop me, once or twice a month usually, and either come to my house or stop me on the street. Once on the subway, once when I was waiting on a bus, always very polite, you know: “We want to talk to you”—but always in the way of, ‘we know where you are, you’re under surveillance of some kind.’ That was my experience for ten years.

Siems: How did that affect you as a writer?

Bernstein: As a writer my main concern was making a living, that was basically it. All the avenues I’d been working for before were closed down. It was not as hard, though it was still difficult, for magazines, so I was able to do a couple of magazine pieces now and again—but for television or movies, which was my main thing, I couldn’t get work. But the writers were luckier than the actors or directors, because they had to show their faces and we didn’t. So it was a question for ten years of finding people who would front for me, essentially, and you couldn’t be selective about what you did. I mean up to a point you could be, and there were certain things you wouldn’t do, but basically you went where you could find work. In my case it was in television, and I was lucky in being a friend of a very good director named Sidney Lumet. He hired me, under the table, and that’s where I did most of the work in those times.

Siems: What about for your colleagues who weren’t blacklisted? How do you think the awareness that people like you were being subjected to this kind of treatment affected them as writers?

Bernstein: Everybody was careful. Everybody was careful. It was not a time for risk-taking on the part of most people. In my area, in television, the work was small in terms of its content. Not entirely. There were writers, non-blacklisted writers who did, I don’t know what you’d call them, “cutting-edge things,” but not political. They stayed away from politics. Mostly psychological. Occasionally little forays into things about Big Business that were not exactly good or right, but I think there was a general feeling of ‘You don’t stick your neck out.’ There was a climate that was produced.

Siems: The defenders of the new surveillance technologies and programs insist that the programs are narrowly targeted at preventing terrorist attacks, and that law-abiding citizens have nothing to fear from the fact, say, that the government has access to information about your phone calls—not the calls themselves, but who you call. Do you think they’re right?

Bernstein: No, of course not. I mean first of all, if I may use the word ‘bullshit,’ you know; that whole thing about ‘if you are a law-abiding citizen you have nothing to fear.’ When they do things like this they use a very wide net. One of the things that was interesting about the FBI men who would come to see me was that they would always want to know where I’m living, who I’m living with, and that went into it. There’s no such thing for them as “narrowing the focus” or that if you’re law-abiding you have nothing to fear. You have lots to fear from both the direct fact that they have you in their database, and that it’s all a warning to you also. It doesn’t matter whether you’re law-abiding or not. ‘We have the power, and we have the information,’ and that’s a terrible kind of climate to live in.

Siems: Why are you personally concerned about the NSA’s collection of phone data?

Bernstein: No, I don’t. At my age, which is considerable, I really don’t care. I feel restricted in the sense that, I realize that—I’m politically on the left and have always been on the left and the things that concern me, that I want to write about, are often on the left. They’re not going to get done. It was always difficult getting them done. Now, forget about it, except occasionally. So I don’t feel any particular self-censorship at this point in my life.

Siems: What are some of the subjects that you don’t feel can get done now?

Bernstein: It’s interesting, but I think that on the whole it’s the same subjects that were always kind of anathema to people who made movies: strictly political subjects, subjects from a left-wing point of view. If the movie studios felt they could make money from them they would make them since that’s their primary goal.

I’m working on a film now, I’m writing a film now, about a left-wing lawyer named Bill Kunstler who was involved with the Freedom Riders in the sixties and the Chicago trial; in Attica; Wounded Knee. He’s a very interesting, dynamic guy and I think that it would make a very good movie. I’ve no hope that anyone would want to do this movie. But perhaps; now that it’s easier to make films, technically, than it used to be, so maybe somebody will make it. I’m writing it with a collaborator, a very good writer, named Jeremy Pikser, who wrote Bulworth, and we’re not holding back in what we’re writing. We don’t feel constrained in what we want to say. At the same time, we’re being appropriately pessimistic about whether it’ll ever get done.

Siems: I hope it does. Kunstler was an iconic figure from my childhood.

Bernstein: He was quite a guy.

Siems: Incredible. So what does the McCarthy Era teach us about the dangers of government intrusion into writers’ private affairs? What should we have learned?

Bernstein: Oh God, what do we learn? I sometimes feel that the only thing we learn is how to predict our mistakes. I think, basically, you learn the importance of being true to yourself, to what you believe in; retaining, as much as you can, the ability to fight for what you believe in. I don’t think there’s anything more specific. There will always come along a demagogue like McCarthy or a right-wing asshole like Ted Cruz who’ll make a lot of noise and make a lot of damage. There’ll always be people like that and you have to recognize them and you have to try to join up with other people. I think that’s very important, not to be isolated. Because the power is always on the other side. They have the power and you’re fighting the power. That’s what’s interesting about Kunstler, for example. At the end of his career, after having participated in all these crusades, whatever they were, after defending people like John Gotti and Larry Davis, who shot six cops or something like that—His feeling was that ‘I’m defending them against the power’ and I think that’s important.

Siems: Do you think it’s reasonable for writers to think that they’re being monitored now, and do you think that has an impact on them?

Bernstein: I think that it is reasonable to feel that they are in some way under surveillance even if it’s not directly against them. How it affects them? I don’t know; it depends on who the writer is and what he wants to do. It’s not a healthy atmosphere, certainly. It’s not an atmosphere that helps create creativity or lets the mind run free. You’re always in danger of self-censorship, of saying ‘no, I won’t try this because I know it’s not going to get done or it’ll alienate the government,’ or something like that. So it’s also in creating the climate that it’s bad. The effect on writers is subtle; it’s not direct, particularly, but it’s there.

Siems: Do you think it’s more present now than it was ten years ago?

Bernstein: Oh yes, I think it is. I think it is. We’ve been a country where at the first sight of a foreign enemy we go right into an abrogation of civil liberties. It used to be communism that caused that. It was always socialism in one form or another. Now it’s terrorism. In the name of national security, great crimes are committed.

Siems: Did you have anything to add?

Bernstein: There is a great quote from [Antonio] Gramsci: “What’s necessary is pessimism of the intellect and optimism of the will.” And that’s what you need. You can’t be a fool about what’s going on. At the same time, you need that will, you need to preserve that. You need to nourish it.

From a Big Tech crackdown to the rebirth of local news, 16 future-minded thinkers predict where journalism will be in 15 years for @politico. PEN America CEO @SuzanneNossel weighs in on the dangers of not investing in media literacy: https://www.politico.com/news/magazine/2022/01/21/media-journalism-future-527294?mc_cid=fd130f603c&mc_eid=fbfdc38749

As part of Protest & Pushback, our special report on threats to First Amendment rights, we looked at a new wave of anti-protest legislation.

Read this Q&A with @PENamerica's @JRTtager to learn what alarms him most after studying the issue.
https://firstamendmentcoalition.org/2021/09/black-lives-matter-and-the-rise-of-anti-protest-backlash/

Know a young person committed to human rights? Tell them about PEN America’s Spring 2022 Free Speech Advocacy Institute! Help us prepare the rising generation to engage in free expression advocacy! Applications are due this Sunday 1/23 at http://pen.org/institute.