The Case of the “Feminist Five” 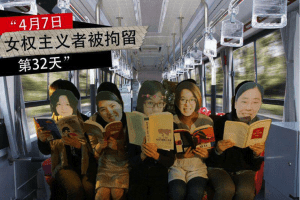 There is a strong perception internationally that modern Chinese society does not put a premium on free expression, press freedoms, or related civil rights, and it is a perception that is encouraged by Chinese authorities. For example, President Xi Jinping has emphasized that media workers should adhere to the Marxist View of Journalism, which criticizes free speech as a “bourgeois concept.” But, despite statements like these, events on the ground have belied the narrative that free speech activism is foreign to contemporary Chinese society. It is a mistake to conclude that Chinese civil society is not aware of or concerned about issues relating to free expression within the country. A prime example of this concern can be found in the case of the “Feminist Five.”

The Feminist Five—Wang Man, Wei Tingting, Zheng Churan, Li Tingting, and Wu Rongrong—are five women’s rights activists from the Chinese cities of Beijing, Guangzhou, and Hangzhou. In March 2015, the five women arranged to commemorate International Women’s Day by passing out stickers protesting sexual harassment on public transit systems in cities across China. Unexpectedly, all five women were detained on March 6 and 7, and later faced possible charges of “picking quarrels and creating a disturbance” (a catch-all charge often used arbitrarily against dissidents in China).

These women quickly became an international cause celebré, an example of the need for international solidarity on women’s rights. The hashtag campaign #FreeTheFive went viral on Facebook, Twitter, Tumblr, and Instagram, easily and briefly collecting and spreading news and advocacy ideas. International organizations used the run-up of the 2015 Global Women’s Summit as an advocacy moment for the Five. The summit was co-hosted by China, and was itself the 20th anniversary of the Fourth World Conference on Women in Beijing. This all pushed the Chinese government to protect its international reputation by releasing the Five.

But, while international influence undoubtedly had a major impact on the incident, it was the domestic response of Chinese civil society that deserves to be center stage, not only due to the effectiveness of the response but because it so clearly contrasts with how the West commonly perceives Chinese society as uniformly accepting of restrictions on free expression.

When the Chinese public caught wind of the case, the Feminist Five immediately received an unprecedented outpouring of domestic support from human rights attorneys, university students, women rights activists, relatives, and other sympathetic parties. The arrests sparked protests and concern across the country.

Hundreds of lawyers appealed for the rights of the Five. One hundred and eleven attorneys from the China Human Rights Lawyers Group released a statement in the Five’s 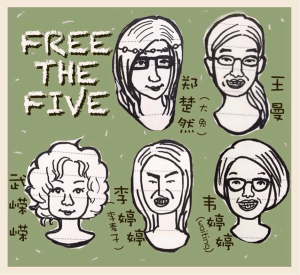 defense. Thirty-four female lawyers from eighteen provinces and cities within China wrote a joint letter reporting Beijing Police’s illegal arrest and harassment of the Five to the Ministry of Public Security, the People’s Procuratorate of Beijing Municipality, and the All-China Women’s Federation (the state-sanctioned women’s rights organization).

Student groups from various universities also appealed for their release. Sixty-eight alumni from Zheng Churan’s alma mater Sun Yat-sen University (SYSU) issued “Support SYSU alumna and women’s rights activists: A petition by SYSU students” to express concerns over the Five and to strongly protest against the unwarranted actions of the Beijing Police. Alumni and students from a total of 10 universities in Guangzhou (including the locally-esteemed Guangdong University of Foreign Studies and Guangzhou University) joined the petition.

Another forum for Chinese activism was Facebook, most notably the Facebook page “Free Chinese Feminists.” Created by Chinese feminists in diaspora, the page would eventually be followed by over 6,000 people, becoming a space for information and advocacy regarding the cases of the Five.

Women rights activist Ye Jinghuan assembled a group of sixteen activists in front of the Haidian Detention Center to express their support for Wu Rongrong, who was detained there. Netizens also posted messages, images, and videos calling for the Five’s release. Meanwhile, Guangzhou activists protested in public spaces through a “masks flash.” Activists wore masks of the detained activists’ faces as they conducted their daily business, pretending the Five were still free as usual in these daily places, such as restaurants, markets, and shopping malls. This widespread piece of performance/activist art served as a highly-visible advocacy action.

The Five Feminists were eventually released after 37 days in detention, seemingly as a result of both the domestic and international outcry.

It is important to acknowledge that celebration of victory for human rights activists in China, nowadays, all-too-often comes with caveats. The Five Feminists were released on “guarantee pending further investigation” (qubao houshen or 取保候审, a concept similar to bail), a far cry from the dropped charges that the Five’s supporters were calling for. And they remain under police surveillance to this day. The incident occurred mere months before the “709” crackdown, a wave of depression on human rights lawyers and other activists by Chinese authorities in a clear effort to silence voices advocating for human rights causes. The 709 depression—a catastrophic crackdown affecting 248 people—has dramatically shrunk the space for free discourse in China, and sent a chilling message to activists across the country. And Chinese activists continue to debate whether today’s women’s rights activism remains a comparatively less sensitive issue for Chinese authorities or whether it has been ‘lumped in’ and associated with other more sensitive areas of human rights and civil liberties in the eyes of the government. 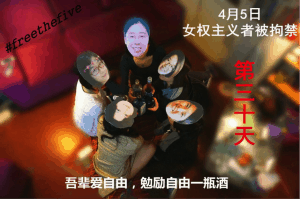 Another “masks flash” action. The higher caption marks April 5 as the 30th day of detention for the Five. The below caption reads “we love freedom, cheers to freedom,” lyrics from a Qing-dynasty era song adopted by China’s feminists. Photo credit: “Free Chinese Feminists” Facebook group.

Despite all these caveats, the “Feminist Five” stand out as an example where, when faced with a restriction on free expression over an important social issue, Chinese activists mobilized a significant domestic response. The Feminist Five is a strike against the narrative—credulously accepted by Chinese and Western elites alike—that Chinese society has no interest in standing up for issues of free expression.

The author of this blogpost wrote this piece after discussion with PEN America’s Free Expression Program. For further PEN America coverage of free expression in China – including our analysis of “qubao houshen” and “picking quarrels and creating a disturbance”—see “Darkened Screen: Constraints on Foreign Journalists in China”.