Meg writes: Did you know that your bra could be considered a threat to national security? This is, obviously, ridiculous. It is also encoded into the minutia of trade agreements, passed under the broad banner of homeland security. Why yes, the exaggeration of a terrorist threat has indeed been used before to serve the particular political aims of powerful businessmen. The tangled threads of the international garment trade—and its significant human cost—are explored in the powerful comics report Threadbare: Clothes, Sex, and Trafficking by the Ladydrawers and Anne Elizabeth Moore. Here we share two chapters, drawn with subtle wit by cartoonist Melissa Mendes, illustrating Moore’s report on the Kafkaesque oddities of zoning laws and import restrictions, which might be quite funny, if they didn’t all serve to uphold a global system of inequity and human tragedy.

“Disturbingly revelatory … ​If you have clothes on your back, whether they’re from a retail store or a thrift shop, Threadbare should be required reading.” —Nat. Brut

It’s tempting to say it’s “almost impossible” to buy clothes in the United States that don’t contribute to this system, but actually, it’s not. It’s a matter of mindfulness, of choosing ethics over thrift, of reading up on your choices, and getting a little uncomfortable in what you are wearing. 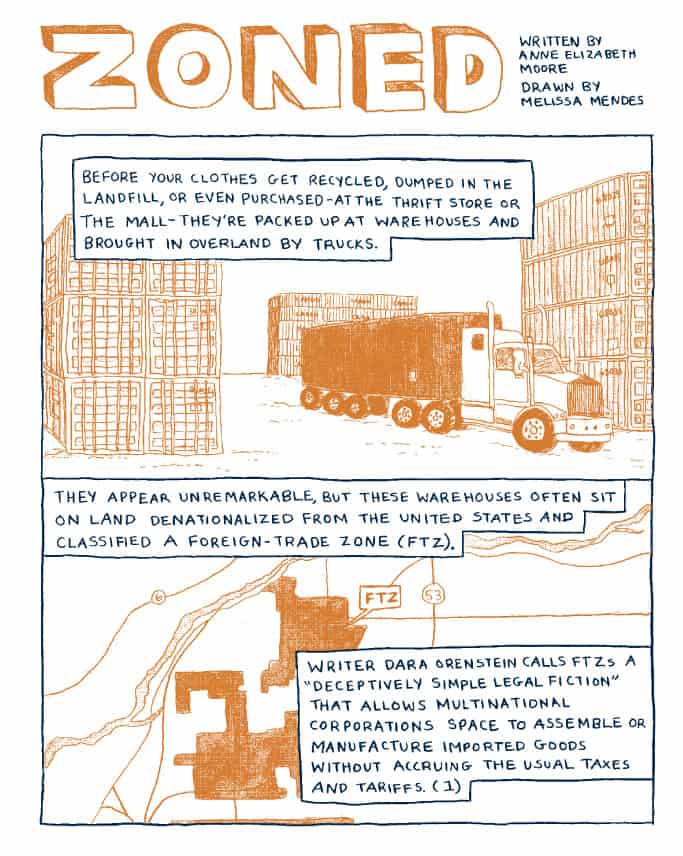 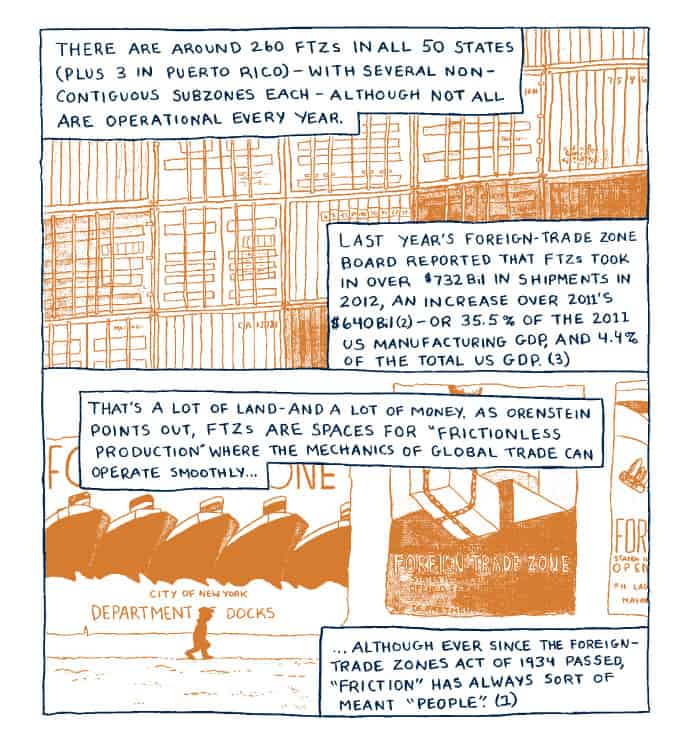 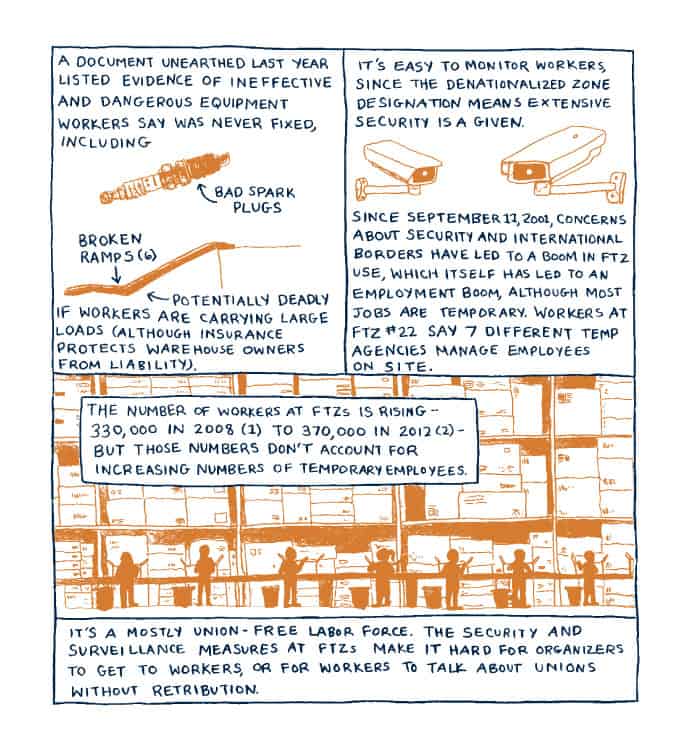 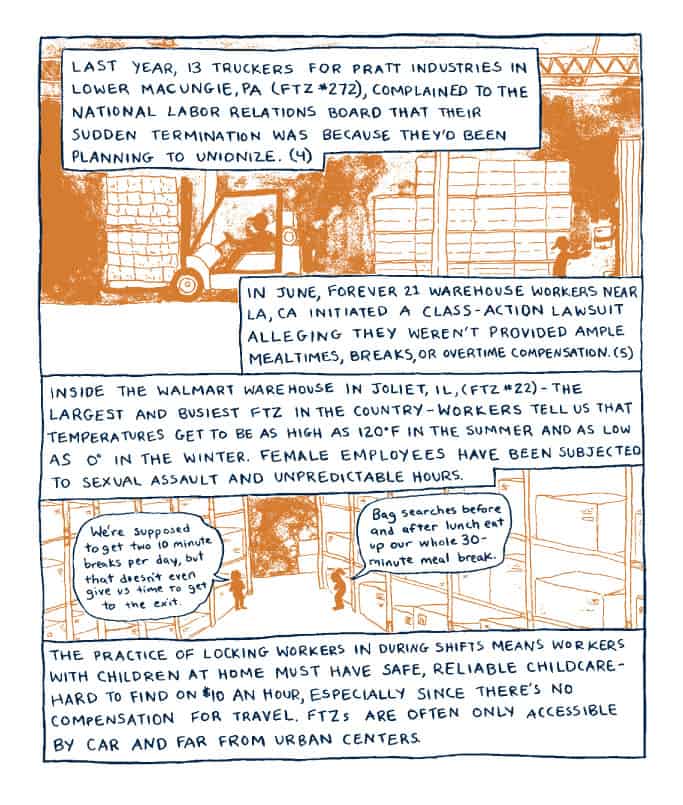 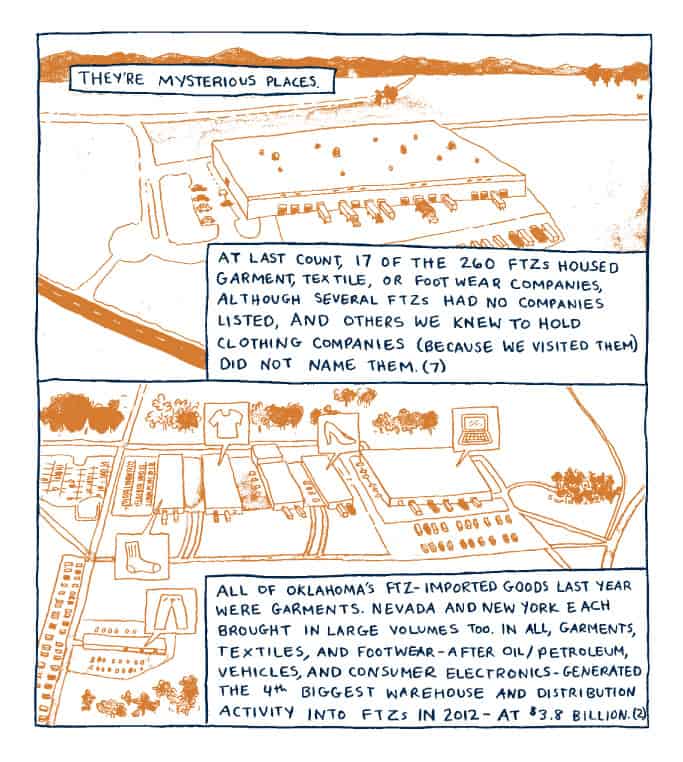 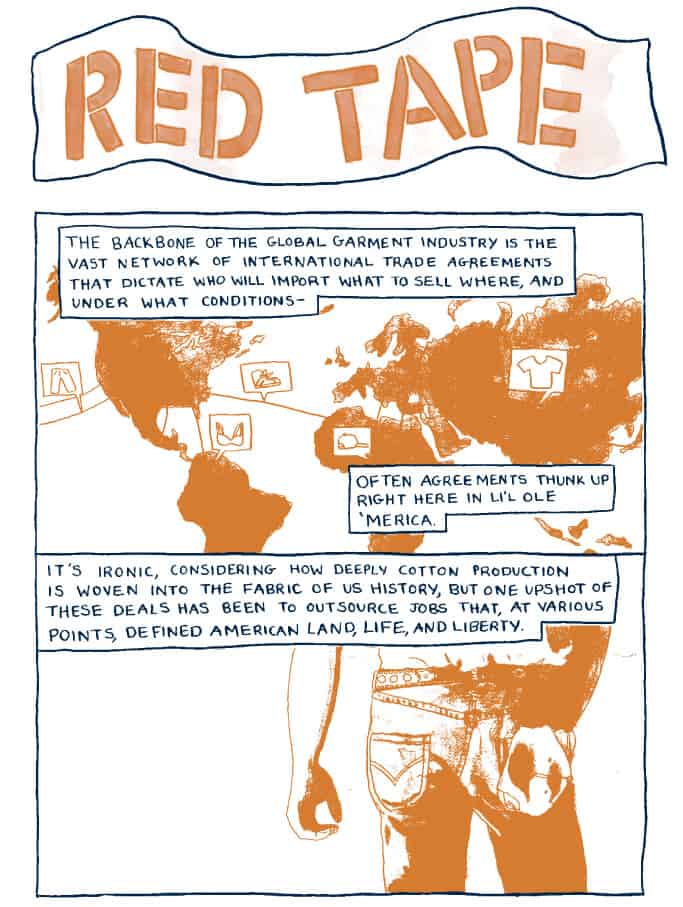 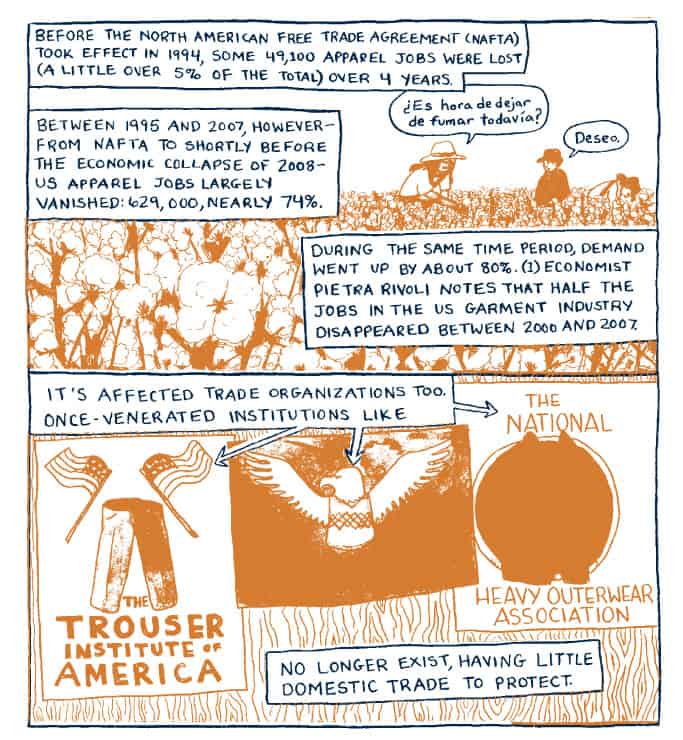 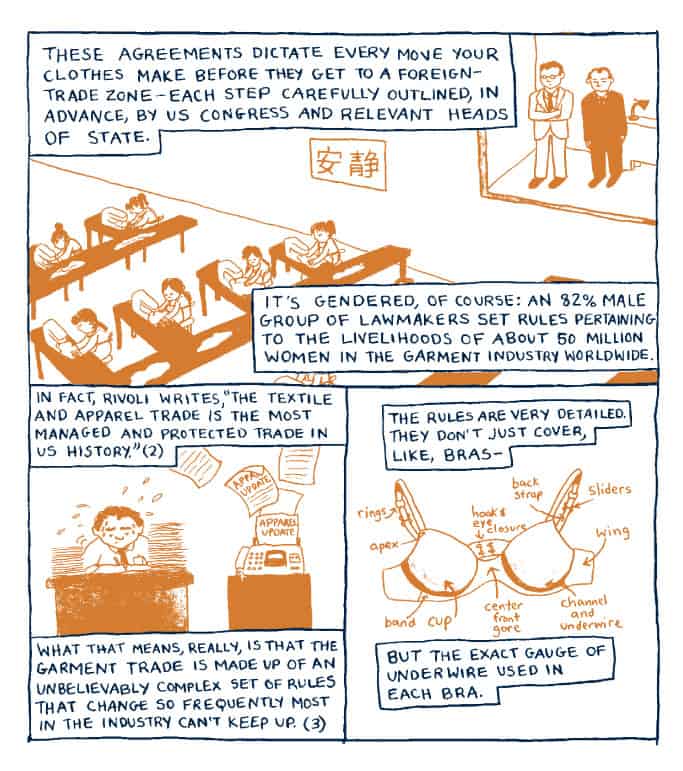 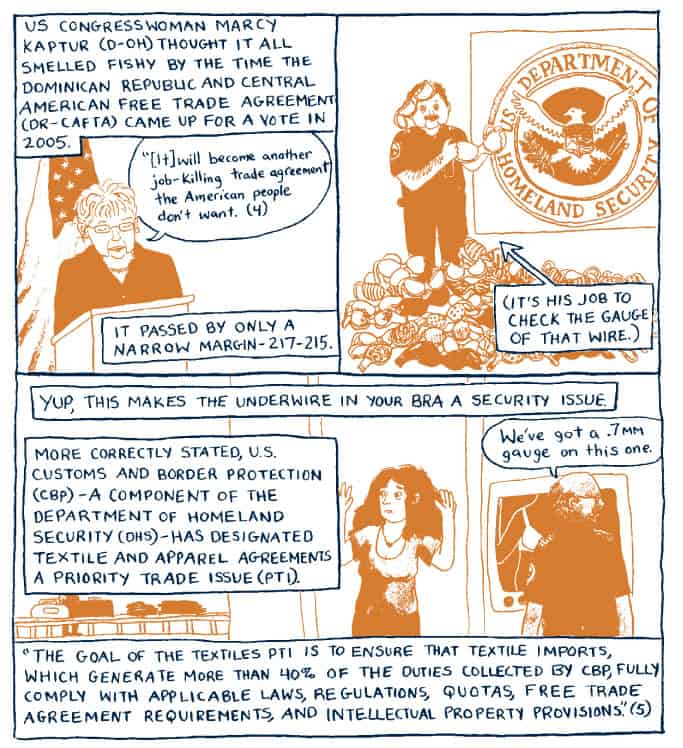 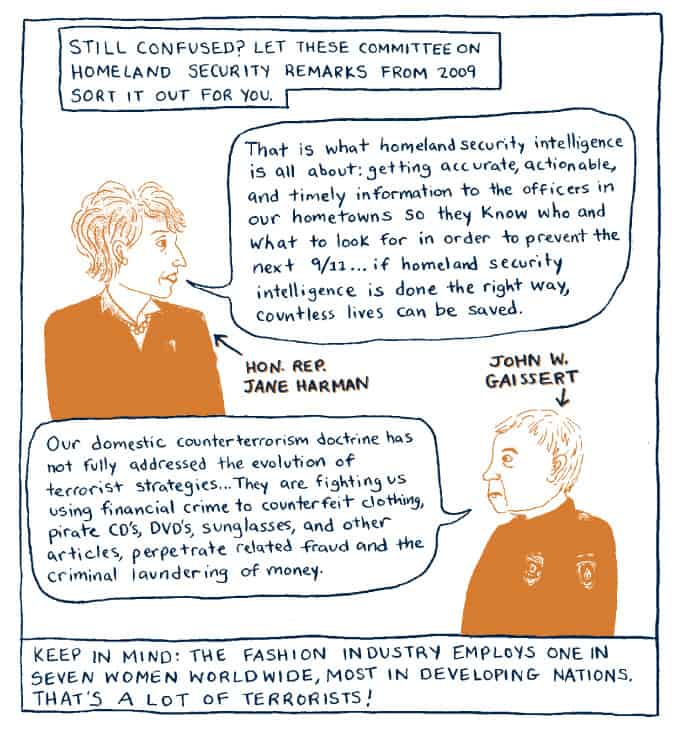 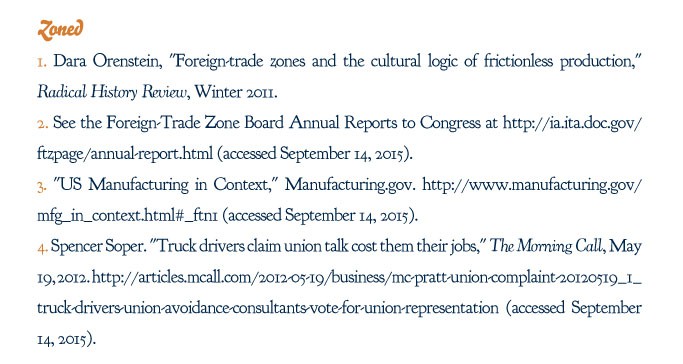 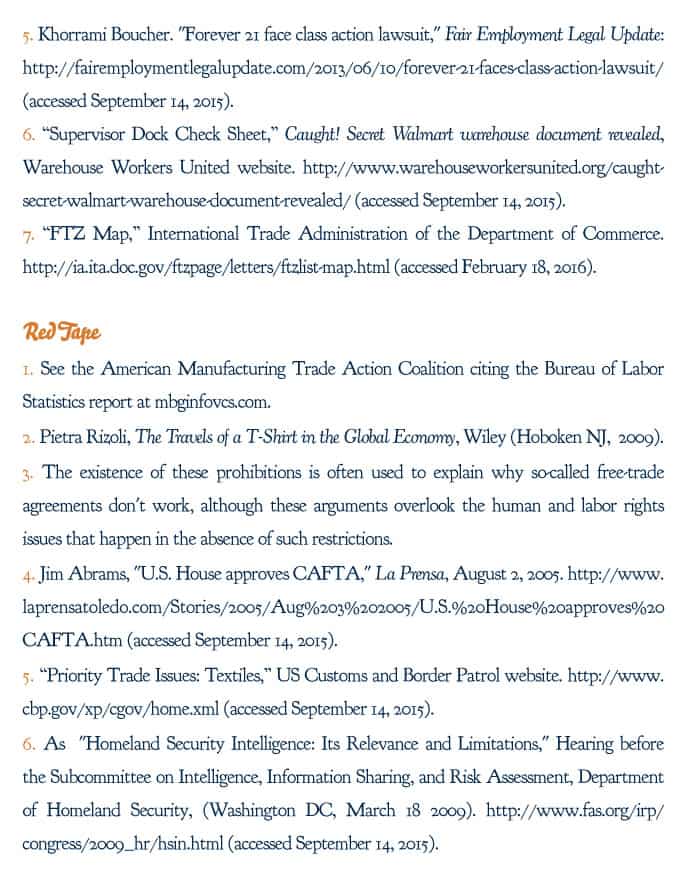 Melissa Mendes was born and raised in Western MA. In 2010, after graduating from the Center for Cartoon Studies, she won a Xeric award to self-publish her book Freddy Stories. Since then, she’s worked with Anne on Threadbare and Harvey and Me, published a graphic novel called Lou, and is now working on an epic family saga called The Weight, based on her late grandfather’s life. You can see more of her work at mmmendes.com.