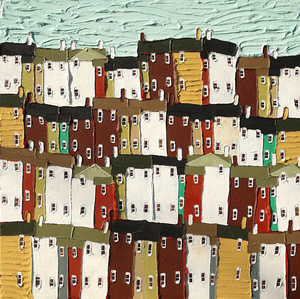 Danniel Schoonebeek: In your latest book, Life in a Box is a Pretty Life, the boxes takes many forms: there’s the prose poem (a life in a box unto itself), there’s the grim suggestion of the box as coffin, and I also faintly hear an echo of Malvina Reynolds’s 1962 protest song “Little Boxes.” Throughout the book there’s also this presence of the box as a “blank,” something to be filled, as we see in this standalone piece, where the mind scrambles to fill the blank with a verb, a noun, an adjective. Can you talk a bit about these various boxes, what it means to live in them, and why we’re so compelled to fill them?

Dawn Lundy Martin: The investigation of the box in the poems is really about a question of freedom, of agency. Is there any way to live in the world and be free? To make our own choices? So I imagine the box as not a single entity but a series of enclosures—actual, relational, and cultural—that prevent us from real feeling. What do we know of feeling? Of desire? Look at queer culture. Look at how queer culture, because of centuries of violent and ideological oppression, now looks like everything else. I’m really interested in the mechanisms at work (those automated functioning of power that Foucault writes about) that construct our liberation movements around the desire for mainstream inclusion. We press ourselves into language already made for us and claim authenticity.

Why not social movements that work toward radical inclusion? Why not the claiming of subjectivities not previously imagined for us?

Sometimes I feel so trapped in this dim light of impossibility. Poetry, I think, can be a radical opening, a refusal to play by the rules, a dancing in madness, a future sight without prescription. I wanted Life in a Box is a Pretty Life to be attendant to what is not allowed and what is not permitted while refusing to be constrained by those regulations. “WE ARE ______ WITH GLEE” is part of that enterprise. The prison does not allow for glee, but glee occurs anyway, on its own terms.

DS: When it comes to free expression, people in this country often have a hard time reconciling their constitutional privilege, and the many other privileges out of which they speak, with the act of speaking itself. How do you define and negotiate the responsibility, as a writer in this country, of challenging our privileges and our sensibilities? And how do you handle that responsibility editorially?

DLM: Let me try to answer this question using my father, who, truthfully often acted like a caged animal. He could be unpredictably violent and I rarely knew what he was thinking because he rarely spoke. And although he was a dark-skinned man from the southeastern part of the country, he hated black people. It was always boggling to me how he could hate black people but not hate himself and not hate me. He couldn’t, it seems, integrate blackness into his psyche—this cultural monster. That would mean, death, wouldn’t it? To identify with what is socially denigrated, disparaged, and annihilated? But, isn’t it a kind of death, too, to make your own body a ghost effect? To negate the power of your own [black] experience? This is the kind of convoluted mess of subjectivity produced by racism and white supremacy.

Are there languages of hierarchy that can attend to the difference between the lack of privilege experienced by the black body in America and the overt censorship in some countries where speaking can be punishable by imprisonment or death? Truthfully, I’m unsure. Does the American writer have a responsibility to recognize their own “privilege” as it relates to the struggle to speak in an international context? I would hesitate to use the word “responsibility,” as it depends certainly on the subjectivity of the American and their relationship to speaking.

In my work—be it poetry or scholarly or somewhere in between—I’m often trying to make room for the muted animal to speak. What would it say if it could, if it felt the desire to speak in the first place?

DS: “Some try to tell us,” you write in Life in a Box, “that reading is the same as living, but we know that is not the case.” In many ways, this dilemma has pushed to the forefront of poetry in the last three years, as we’ve witnessed the breakdown of both l’art pour l’art and the notion that being a progressive reader makes one a progressive person. Is that the great false advertising of literature, that books can be life? And do you think there’s a way to integrate writing into our actual lived experiences in a way that does them justice?

DLM: I think that what makes one a progressive person is working toward progressive social change, which is more than just talking on the internet. The Bard Prison Initiative changes whole life trajectories for incarcerated people. And, social justice activists working to raise the minimum wage to $15 an hour might change, fundamentally, the financial predicament for millions of families across the United States. But, the sentence is also a powerful mechanism for social change, however more insurgent. I’m a disciple of the poet/scholar Erica Hunt and her conviction that ordinary language (re)produces ordinary meaning. She says that “poetry makes a path out of ordinary language, contesting ordinary claims about the ‘real.’” Poetry is crucial to the quest for social justice because the ways it makes meaning is unordinary. When the poetry that excites me most attends to the real it is infused with invention and disjunction, the elliptical and the suggested, thereby refusing the foreclosure of meaning, just as we as humans are not foreclosed although experience sometimes would have us think differently. If I were you I wouldn’t trust all those voices in Life in a Box is a Pretty Life, especially this one with its shifty logic, proclaiming that reading is not the same as living. It depends on what you read.