Three Men I Met (Untrue Stories Based on Real Facts; a Literary Exercise) 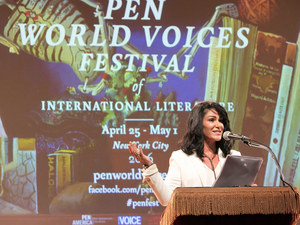 This piece was read by Lydia Cacho at the opening night of the 2016 PEN World Voices Festival, where authors shared their philosophical inquiries into society’s need for mind-altering drugs and the all-too-human desire to escape reality.

Actor Sean Penn uses his charm to seduce actress/producer Kate del Castillo because he knows she has been contacted by the legal team of Joaquin Guzman Loera (aka El Chapo). The Oscar-winning actor wants to interview the most wanted drug lord in the western hemisphere. Penn is so worried about the war on drugs and the social violence it has created in Latin America and the U.S. that he is willing to risk meeting with the man responsible for selling 80 percent of the world’s supply of heroine and cocaine, and who is of course responsible for killing and exploiting thousands of men, women, and children.

Before doing so, the famous actor goes to the living room of his fancy house in Malibu, takes a tiny bottle of white powder out of his pocket and, with the expertise of a brain surgeon, cuts the lines of pure Colombian cocaine to sniff it… It’s delicious, smooth like the best. In silence he tells himself that it’s organic cocaine, after all it has been planted by peasants in Bolivia, men who chew the coca leaves to gain strength to keep on working their harvest under the scorching sun of the indigenous land down south. He has been there, of course, he is not only an actor, he is also an activist with a loyal photographer that accompanies him everywhere, just in case he does some good that has to be documented for posterity.

Sean, playing a dumb wannabe CIA agent, is now is ready to be a brave man, to take upon himself the task of—supposedly—interviewing the most dangerous drug lord of the Americas.

When the Mexican authorities said they had captured El Chapo thanks to the American actor’s intervention and full-of-shit Rolling Stone piece, most of his best friends could not believe it: Sean had managed to have his main drug supplier arrested (the irony). Deep down inside, the actor knows the drug supply will never stop. He rejoices in his unwise hero fame, and to celebrate he probably smoked a joint of the finest California Gold provided by his Malibu medicinal drug expert… nothing is more tasty than some good pot accompanied by a good glass of straight cold prime Russian vodka. Why not, life is too short for abstinence. The show must go on.

Camilo is an editor, well known amongst Mexican media as an interesting young writer, a so-called member of the “wiskysquierda”; the urban forty-year-old men that dress as alter-nice, behave like teenagers trapped in the post-Superman era, the nouveau-rich that read only unknown authors, despise modern poetry, and fuck every young woman that comes near them at the book fairs they religiously attend.

After a good day’s work he celebrates with five to ten shots of the best Mezcal brought from the organic farms of Oaxaca. However he needs clarity and inspiration to be an admired intellectual, so after a couple of hours of alcohol he calls his dealer. He holds tiny pieces of paper-like acid with a printed face of Homer Simpson in his hands and he smiles at us. He places the slides of bliss in his tongue while his friends do the same… Oh heaven on Earth! Nothing matters, the political problems he wrote about this morning in the national newspaper become unimportant, the two hundred kidnapped young men his favorite writer documented in a fantastic graphic novel are irrelevant. The drug lords are mere intermediaries between his need to escape adulthood and the bloodshed of his country.

Do not moralize please, we are here to be brilliant and nothing else, he seems to say.

Tomorrow after coming back to earth, hung over, dragging a guilt trip of his daily consumption of acid, cocaine, marijuana, and Mezcal, he will search for a good expert to publish a nice book on the need to legalize drugs, while he finds the genius capable of taking away the self-reproach he will face again tomorrow. He calls the dealer that yesterday killed three teenagers that got hooked on the Crystal meth they where supposed to sell to nice urban, eco-friendly, double-standard, new-age intellectuals.

We are here to lecture, he seems to say, looking at me, not to understand, others are accountable. We are brilliant juvenile freedom rebels allowed to be shallow while selling words of wisdom to inspire others, to make the revolution against conformity and corruption.

Hail the revolution! Hail the freedom of speech; life is too short to put together actions and words… don’t be a conservative nag! Clean the blood and shut up, read a good book, it will make you a better person, they tell me while I walk away without drinking the last Mezcal of the fancy evening they organized to discuss poverty, torture, and persecution of journalists.

Pedro wanted to go to University and become an engineer; his poor family from Chiapas, the Mayan southern state, could not afford such a luxury. The miraculous discovery he made one spring morning changed his life forever. The Army was offering young Tzotzil indigenous men to join them in order to become the best they could be.

This young man with copper skin and brown eyes made himself a promise: he would study hard, become a systems engineer, get a fantastic job and help his entire family out of poverty. He was to become the first of his family to be something other than a child of misery, a proper professional, a respected citizen, and the first in his family history to have a bank account in Western Union…the same bank where El Chapo launders his bloody millions.

Ten years later Pedro is sweating in his military clothes, the stench of marijuana all over him; his boots full of stains. Glued to his left boot is a plastic-like matter that got bonded from the last time he was responsible for burning in the crematorium four and a half tons of cocaine found on the border of Tijuana.

He looks beaten, jaded, exhausted; there is a hint of sadness in his eyes. There is something else…a glossy appearance in his pupils that reveals the sensory distortion and the lower reaction time. He blames the drugs he hates to burn, smoke, and snort.

Pedro has not talked to his mother for the last three years. He is ashamed of the possibility of looking into his mother’s eyes and finding only disappointment and the judgment of the traitor son. He wakes at four in the morning every day, he goes to sleep at one or two.

As a child he loved to sleep for hours in the green meadow of the mountains of Chiapas, a day-dreamer who saw the limitless sky as an omen of his bright future. Ten years later he cannot sleep. Every time he tries to rest, the images of that mountain field in Tamaulipas, and the fifteen decapitated teenage heads with open mouths bleeds into his memory. The sound of the unstoppable drum-like gunfire invades his ears as ants plague an abandoned cave.

The other soldiers sleep while he does his nightly routine: he holds a small kerosene lamp that glows feebly in the dark, walks stealthily to the back of the military camp next to the poppy fields in Chihuahua, lights his small pipe of chocolate hash and holds his breath once again.

After ten minutes he goes back to his hammock. As he walks he refuses to look at the starry sky, nothing good can come from childhood memories. He is now a proud soldier in the war of a country that fights against itself. Bleeding brothers and sisters use drugs to forget, to forgive, to endure the unbearable awareness of reality, to let go of the inaccessible dream of earthly freedom. To tolerate the fact that childhood dreams don’t always come true.