The PEN Ten with Karen Emmerich 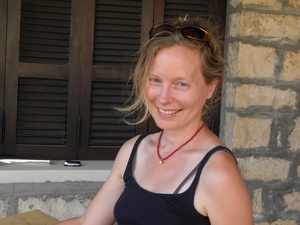 When did being a translator begin to inform your sense of purpose?

I somehow find it much easier to switch those terms, and to say that a sense of purpose has always informed my translating, from the very first book I translated, Margarita Karapanou’s novel Rien ne va plus. It was actually the first book I ever read in Greek, when I was eighteen, and it gutted me. Of all the books I’ve translated, it’s the one I’ve gotten the most emails from strangers about. Knowing that her work now affects people in English as it did me in Greek—that provides an incredible sense of purpose. And of course now that Greece is constantly in the news, portrayed in frustratingly distorted and unfair ways, I feel an increased sense of obligation to keep bringing across as much Greek literature as I can, to counter these media representations and misrepresentations.

Well, as a translator, I’m always “stealing,” in a sense, and yet acutely aware of the ethical implications of what I do. I’m also a professor, which makes me sort of a stickler for proper citation.

Where is your favorite place to translate?

Airplanes. (See Christine Brooke-Rose’s Between.) For a cheaper option, any table, preferably small.

Well, I’ve been deported, but never arrested. Deported from Greece for an expired visa, due to a boring bureaucratic mix-up. My time at the “Aliens’ Office” of the Greek police department (an experience I’ve had on Cyprus, too) was eye-opening, and made me more aware than ever of my own position of privilege, even in the midst of a deportation.

Real estate, recently. But I think it’s less an influence than a symptom, of moving between so many places that I really just want one.

This is an impossible question for a translator. Any text I’ve translated is daring in its own way. An obvious answer is Yannis Ritsos’s Diaries of Exile, which I recently co-translated with Edmund Keeley—diaries in poetry written while Ritsos was in an internment camp for political prisoners in the late 1940s. But also Karapanou’s novels, written by an individual experiencing deep mental anguish. And even the poetry of Eleni Vakalo, which is incredibly daring in its systematic, syntactical reworking of the Greek language itself. One of my favorite lines from her work, which speaks to precisely this issue of daring and intellectual risk: “Our way of being in danger is our way as poets.”

What is the responsibility of the translator?

While the notion of the public intellectual has fallen out of fashion, do you believe that those who engage with the written word have a collective purpose?

What book would you send to the leader of a government that imprisons members of the artistic and literary world in retaliation for their expression?

Surveillance: observation carried out by those with power, and thus with a capacity and potential intent to harm.