The PEN Ten with Hannah Howard 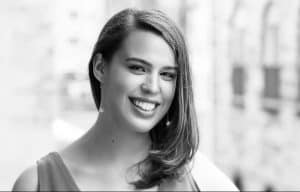 The PEN Ten is PEN America’s weekly interview series. This week Hafizah Geter, PEN Ten guest editor and editor at Little A from Amazon Publishing, speaks to Hannah Howard, author of Feast: True Love In and Out of the Kitchen, published in April 2018 by Little A. Catch Hannah at the Slice Literary Writers’ Conference in Brooklyn on Saturday, September 9 and at the Brooklyn Book Festival on Sunday, September 16.

1. How does your identity shape your writing? Is there such a thing as “the writer’s identity”?
Identity is multiple—I am a woman, a New Yorker, a soon to be a wife. American. White. Anxious. Identity is in flux. (I hope I’m not always anxious.) Feeling that I was weird, or different, or didn’t quite belong because I was too tall, too Jewish, too much, shaped who I was as a I grew up, both as a woman and as a writer.

My theory is that we writers were—at least for a moment—sad little kids who became less sad and less alone because of the very real love we discovered within the pages of a book. That part of my identity is not going anywhere.

2. In an era of “alternative facts” and “fake news,” how does your writing navigate truth? And what is the relationship between truth and fiction?
The best writing—fiction and nonfiction—is a search for the truth. Things happened, and I wrote about them. My memoir is my truth, which is not to say it is untruth. It has been fact-checked, cross-referenced, and double-checked. As a writer of nonfiction, truth is at the heart of what I do—not in some sort of moral way, but in an aesthetic way. The creative engine of nonfiction is to start with the truth, then investigate it, question it, complicate it . . . in a sense, to make it even more true. The truth is endlessly fascinating and expansive.

What I mean to say is that nonfiction is useless without truth. Truth is the starting point from which we can dig deeper and uncover more about our emotional lives and humanity. Writers have a responsibility to be very clear about when we are making up worlds or characters, about whether we are writing fiction or nonfiction.

3. Writers are often influenced by the words of others, building up from the foundations others have laid. Where is the line between inspiration and appropriation?
There are so many voices, words, songs, images, and ways of seeing the world and ourselves that get grafted onto our brains as we move through our lives. I think the line between inspiration and appropriation has to do with giving instead of taking credit, honoring instead of bulldozing, listening instead of assuming.

4. “Resistance” is a long-employed term that has come to mean anything from resisting tyranny, to resisting societal norms, to resisting negative urges and bad habits, and so much more. It there anything you are resisting right now? Is your writing involved in that act of resistance?
I hope my memoir Feast resisted easy answers. I told the story of my eating disorder, which was a sort of resistance I waged against myself. It was messy, miserable, and ultimately unsuccessful. Recovery involves resisting too—resisting the selfish, small, and tiresome part of me that won’t be happy until I’ve obliterated everything good and scary in my life. And writing is a big fuck you to the voice that tells me it’s already been said and done, that I’m not important enough, worthy enough, or skinny enough to take up space on the page and in my life. I want to write and live in resistance to the patriarchy, in resistance to the relentless cultural messages that say a woman’s body is supposed to look a certain way, in resistance to diet culture, objectification, and perfectionism.

5. What do you consider to be the biggest threat to free expression today? Have there been times when your right to free expression has been challenged?
I am enormously lucky, in a world of so much profound injustice, that my voice has not been silenced. I’m frightened by an administration that doesn’t believe that the arts have value, or truth has meaning, or people deserve empathy.

6. What’s the most daring thing you’ve ever put into words?
My memoir Feast: True Love in and out of the Kitchen. My truth. My vulnerability. Especially the times when I wasn’t the hero of my story.

7. Have you ever written something you wish you could take back? What was your course of action?
Usually it takes somewhere between five minutes and five months for me to cringe at whatever was the was last thing I wrote. Suddenly, I wish I could make it all go away. (How did it morph from fine to hideous so damn fast?)

I was afraid of hurting people in Feast. I tried my hardest to be both honest and kind. At some point I decided that was the best I could do. I wouldn’t take any of it back.

8. Post, stalk, or shun: What is your relationship to social media as a writer?
All of the above! It depends on my mood. Social media is a creative outlet that gives us more avenues for dialogue and connection. I can reach readers and writers . . . and the genius Instagram account @drakeoncake. But it can be a serious distraction, and a tool for my brain to pick on me, so I should approach social media with boundaries and skepticism. It seems to me—and I have only recently published my first book—that social media is a powerful tool for writers to market their work, develop their readership, and be seen in the world.

I’m thinking of reviews for my book on Amazon, which older, wiser writers and my therapist agree that I should not read, but that I can’t help but reading compulsively. Five stars, likes, and shares all give me a little adrenaline rush. I’ve gone down a strange rabbit hole, when someone gives Feast a one-star review and some harsh words, of seeing what other things they’ve rated on Amazon and judging their character (They love toenail clippers, but they hate spiralizers and calculus textbooks . . . what does it all mean?) Social media can do that too—both feed and bruise my ego. Why has my book not been reviewed more? Why am I not Instagram famous? Why am I not famous famous?

No good can come from this line of thinking. I remind myself that I have written a book and the book has resonated with people, which was my big dream after all, and which social media makes it very easy to see. For that, I am immensely grateful.

9. Can you tell us about a piece of writing that has influenced you that readers might not know about?
Throughout middle and high school, I was a devotee of the zine Cometbus. I loved reading about Aaron’s adventures with his punk scene friends in the Bay Area, which resembled my sheltered private school life not at all. Yet I felt a total camaraderie with the writer and shared his compulsion to write about the mundane and awesome moments of my life as they unfolded. I loved his raw and unpretentious voice. I loved that he wasn’t afraid of intensity, emotion, and humor.

Thanks to Aaron, I started my own zine. It was called Power Dreams, and there are several boxes of back issues in my parents’ closet. They keep threatening to get rid of them.

10. If you could require the current administration to read any book, what would it be?
The Handmaid’s Tale, maybe? But it’s going to take so much more than a book. It’s going to take a library.

The PEN Ten with Elizabeth Hawes

The PEN Ten with Diana Marcum