The PEN Ten with Diana Marcum 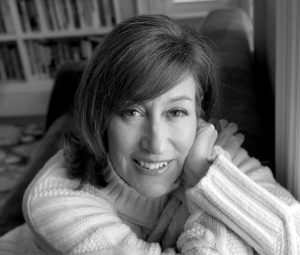 The PEN Ten is PEN America’s weekly interview series. This week Hafizah Geter, PEN Ten guest editor and editor at Little A from Amazon Publishing, speaks to Diana Marcum, author of The Tenth Island: Finding Joy, Beauty, and Unexpected Love in the Azores, published this month by Little A.

1. How does your identity shape your writing? Is there such a thing as “the writer’s identity”?
I think it might be more the other way around: How does my writing shape my identity? To me, writing is a way to explore, to try to put all the pieces together. When we tell stories we’re creating a self, claiming a narrative—maybe stepping back enough to laugh at a situation—or cry. To me, a writer’s identity is something that reaches beyond the real-life confines of gender, race, nationality, etc. and gets to what’s transcendent—someone’s compassion, humor, wisdom, pain, their unique way of seeing and being in the world.

The facts are the facts and the news is the news. I think it’s dangerous to give even a tiny wobble of a head nod to this terminology.

So, first, the journalism. There is no wiggle room. I am trying to convey a place and people to the best of my abilities. There are layers of checks in the system to guarantee what a person reads in the paper is as accurate as possible. If I get something wrong, the paper will publicly correct it. I’d like to see one of these people shouting “fake news” try spending days with someone and feel the weight of being trusted with their story or try to write something that makes it past the Los Angeles Times editing process.

In the memoir, I gave myself more room to not recall the exact date and chronology of every incident, and I choose what I did and didn’t want to share. But I was still, even in a lighthearted memoir, looking for some truths.

I think it’s about transparency. Journalism says: We are going to present the facts as they can be ascertained and let you discover the truth for yourself.

Fiction, and maybe memoir, says I’m searching for my truths in a way that’s different than only fact-based reporting and this is what I’ve pinned down so far.

Both of these are charms against “alternative facts” which would be nothing but big ol’ lies and the enemy of truth.

3. Writers are often influenced by the words of others, building up from the foundations others have laid. Where is the line between inspiration and appropriation?
Quote marks.

4. “Resistance” is a long-employed term that has come to mean anything from resisting tyranny, to resisting societal norms, to resisting negative urges and bad habits, and so much more. It there anything you are resisting right now? Is your writing involved in that act of resistance?
I am resisting letting the large bad, swallow and taint all the many small and tangible goods. There are real threats and it’s easy to get sucked into being shrill and scared all the time.

But I am resisting letting every dinner party turn into a we’re-doomed gloom-fest. We’ve all seen the movies—the guys who win are the wise-cracking ones. Evil empires fall and also they have no sense of humor.

My writing is involved. I recently talked to a 10-year-old boy about being locked up and separated from his father at the border—but I also talked with him about why school meant so much to him and what stories he asked his father to tell. I talked to another 10-year-old whose father is taking him to El Salvador because the father fears the risk of being killed, like four of his brothers, less than being deported and separated from his American son. We spent time just playing with their puppy.

The last part of my book takes place during the 2016 election and I had a string of international neighbors all wanting to talk to me—the American—about their fears. I considered including that drumbeat in my book, but didn’t. I didn’t want world events dictating to me that I couldn’t write the lighter book that I wanted to write. I am resistant to giving over every sliver of attention to the “important” stuff.

It’s not just that life goes on. It’s that it thrums around and beneath and despite of anything and everything.

(So, when the press is called the enemy of the people it literally makes my heartbeat quicken.)

I’ve reported from immigrant communities in the Central Valley where people are afraid to speak freely because of ICE or gangs. I have many friends from dangerous places who do political work. So I would never consider that my own freedom of expression as an American features writer has been threatened.

But the point is that it could be. Freedom of expression, especially now, comes with a responsibility to speak out for the people who do not have that luxury and for any erosion of a writer’s freedom. (Only, not at a dinner party where everyone already shares the same opinion. See above.)

6. What’s the most daring thing you’ve ever put into words?
By Diana Marcum

7. Have you ever written something you wish you could take back? What was your course of action?
Not that I recall. At least publicly. (There are plenty of texts I do not wish to speak about.) But thanks for getting me started early on figuring out what to do when it inevitably happens.

8. Post, stalk, or shun: What is your relationship to social media as a writer?
I’m like the person who doesn’t stand around the water cooler chatting every day. But then something catches their ear and they are right there dishing and soaking up every word. So, a mixture of post-stalk-shun. I’m really still trying to figure it out. I play around a bit on Twitter. I have always shunned Facebook. I meant to start an author website and get on Instagram but haven’t gotten around to it because I lean towards IRL.

9. Can you tell us about a piece of writing that has influenced you that readers might not know about?
My Family and Other Animals by Gerald Durrell has been a favorite book always. It’s a wonderful book—a celebration of the natural world and human lunacy. And I’m sure this memoir about a little boy on the island of Corfu in the ’30s had everything to do with me writing a memoir about a woman on the island of Terceira almost a hundred years later.

10. If you could require the current administration to read any book, what would it be?
I think this very question is overly optimistic.

But I’d slip them a copy of How the Grinch Stole Christmas by Dr. Seuss. It’s about a bitter, oddly colored creature who steals food from families and is unmoved by vulnerable children. I’d underline the parts where Max, his loyal employee, goes along with his employer’s schemes, including pulling a sleigh with all his might, only to find himself teetering over an abyss. And the parts about how The Whos kept on singing.