The PEN Ten is PEN America’s weekly interview series. This week, Jared Jackson speaks with Morgan Jerkins, author of Wandering in Strange Lands: A Daughter of the Great Migration Reclaims Her Roots (Harper, 2020). 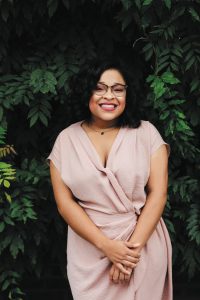 1. What was the first book or piece of writing that had a profound impact on you?
It’s a tie between Madame Bovary and Lolita. I loved Madame Bovary because of the sentimentality and maximalist language throughout the story, and I loved Lolita because of how Nabokov plays with language, which is impressive because English was not his native tongue. Lolita is really controversial and with good reason, but as a teenager, it gave me insight into what men can get away with in broad daylight.

2. How does your writing navigate truth? What is the relationship between truth and fiction?
My writing navigates truth through recognizing that oftentimes, truth does not exist in a strict black-and-white binary. My latest book centers African American families, and unfortunately, most of our truths that we safekeep for generations is not documented or the archives have yet to be discovered. The result is that a dominant narrative is set that is often not in our power to manage. Oftentimes, our storytelling can be easily written off as myth and folklore, which shouldn’t be pejoratives either, mind you. My writing has to lay out the written truths but also the oral histories that may or may not collide with each other because history should always be entered into with an open mind.

“My writing has to lay out the written truths but also the oral histories that may or may not collide with each other because history should always be entered into with an open mind.”

3. What does your creative process look like? How do you maintain momentum and remain inspired?
I tend to hit my strides in the early mornings because I don’t get distracted by Twitter. I love the early mornings for writing and revising, and I keep momentum by sticking to word count limits. So, for example, if I need to write 30,000 words in 45 days, I do the math and figure out the minimum amount of words that I have to hit.

I remain inspired by reading others’ works and talking to others in the industry, communing with friends and family, and also persisting in therapy.

I am privileged to have never had my right to free expression challenged. However, I work in media, and I have seen how fellow journalists have been affected when the POTUS mocks certain publications or screams “Fake news!” when something does not fit his propaganda. It’s soul-crushing and demoralizing, especially for those who sacrifice their mental and physical health to make sure the general public knows the challenges impacting the nation.

5. Among your many roles in the literary world is that of visiting assistant professor at Columbia University’s School of the Arts. What advice do you have for young writers? What insights do you wish you had earlier?
I would say to not ask for permission to write what you want to write. Whatever inspires you, whatever keeps you up at night where you can see images or sentences in your head, write it. I’d also say to make sure you enjoy the ride during the in-between moments. Don’t just shoot for the successes and forget to celebrate once you get there.

“[Do] not ask for permission to write what you want to write. Whatever inspires you, whatever keeps you up at night where you can see images or sentences in your head, write it.”

7. Which writer, living or dead, would you most like to meet? What would you like to discuss?
I would love to meet Zora Neale Hurston, and we would discuss autoethnography and folklore over a plate of fried chicken!

8. You are the senior editor at ZORA. Can you speak briefly about your work there, both as an editor and contributor? How is ZORA shaped by the legacy of Black women writers, activists, and thinkers, and in what ways does that legacy guide the publication’s mission to amplify the voices of women of color and why is it important to do so?
With pleasure. At ZORA, I edit op-eds, political columns, interviews, and features from both emerging and establishing female and nonbinary writers of color. From time to time, if I feel passionately, I will contribute myself. Zora Neale Hurston is our namesake, and the name Zora also means “dawn.” We want to illuminate Black women writers, thinkers, and activists of the past through rediscovery as well as those who are lighting the path forward. Because I’m very literary minded, I did this through the ZORA Canon, and I’m thankful that it was received very well. We’re constantly trying to bridge the gap between the past and present, print, and digital archiving. It’s important because if we as Black women don’t do it, who will? We have to look out for one another.

“Oral storytelling is such a lifeline for us, and I wanted this book to serve as a living, breathing document to other Black people that in spite of the violences against us, in spite of much time and distance, we are not alone. . . It was written by me for us, and I hope it can serve as a balm to someone as they set out to connect the dots of their family history on their own, too.” 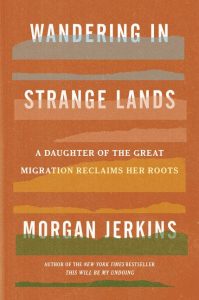 9. Your second book, Wandering in Strange Lands: A Daughter of the Great Migration Reclaims Her Roots, explores not only your Northern and Southern lineage but that of Black people across America. The question of why—from the food Black people eat to the rituals practiced—steers much of your journey. How did your personal inquiries about your family inform the larger project? When did you realize it was important to look beyond yourself, and as you write in the book’s opening section, “excavate the connective tissue that complicates but unites” Black people?
Well, I’ll be honest, I didn’t want to even include my family in the first few drafts, but my editors got me together quick! Because I bared so much of my soul in my debut essay collection, my heart felt like a venus flytrap snapped shut. So, it definitely took time. Once I realized that “Hey, you are a part of this grand lineage, and you can’t just be some distant researcher,” then I opened up my family to the process (which I never do!) and started interviewing them.

I had to look beyond myself because African Americans have been in these countries for hundreds of years. Because of migration, we’ve crossed the same paths and rivers, taken the same railroad systems, and landed somewhere along similar routes. We’re all connected, and I see this in people’s faces, mannerisms, and social media conversations. So, I always knew to look beyond myself. I just wanted to make sure that if I included myself that it would not jeopardize the breadth of research that I’d done. But it didn’t. Thank god.

10. Memory plays a critical role in Wandering in Strange Lands. How has the tradition of oral history preserved the cultural memory of Black people? What purpose does documenting it, putting it into written form—as you do in your book—serve in protecting the narrative of the history of Black people in America?
Oral history is often all we had. Many of our ancestors were illiterate so stories and documents weren’t written down, and if they were, the files are either hard to discern or written by someone outside of our communities. Oral storytelling is such a lifeline for us, and I wanted this book to serve as a living, breathing document to other Black people that in spite of the violences against us, in spite of much time and distance, we are not alone. I’m a Black woman of multiple lineages, and I traveled across the country finding other “family.” It was written by me for us, and I hope it can serve as a balm to someone as they set out to connect the dots of their family history on their own, too.

Morgan Jerkins is the author of the New York Times bestseller, This Will Be My Undoing, and the senior editor at ZORA. A visiting professor at Columbia University, Jerkins’s shortform work has been featured in The New Yorker, The New York Times, The Atlantic, Rolling Stone, ELLE, Esquire, and The Guardian, among many others. She is based in Harlem.

The PEN Ten: An Interview with Laura van den Berg

The PEN Ten: An Interview with Peter Meech

ALTA's first ever virtual conference, #ALTA43: In Between, starts TOMORROW! Check out the conference schedule (http://ow.ly/w2Fs50BD9VC) to see what is on offer from tomorrow through October 18, and be sure to register to enjoy it all! http://ow.ly/ImK350BD9VD