The PEN Ten: An Interview with Forsyth Harmon 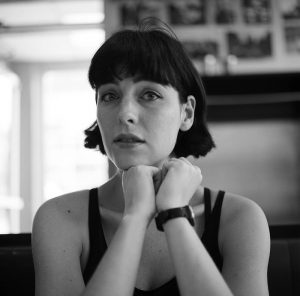 1. What was the first book or piece of writing that had a profound impact on you?
I remember being moved by Susan Minot’s short story “Lust.” I think it was the first piece of literature I read that took teenage girlhood seriously. The 18- or 19-year-old narrator offers a survey of her sexual encounters: the initial thrill and the ensuing letdown. One line in particular has stayed with me through the years: “You begin to feel as if you’re showing through, like a bathroom window that only lets in grey light, the kind you can’t see out of.” I remember first reading that line and thinking, “Yes, that’s just how it feels to get used up.”

2. What does your creative process look like? How do you maintain momentum and remain inspired?
Creation requires energy, which for me means taking good care: eating well, getting exercise, corresponding with friends, reading, and resting—the last of which I haven’t been very good at, historically. I’m trying to get better. I saw something the other day about disambiguating different types of rest: physical rest, emotional rest, mental rest. . . that feels important.

Alcohol had become an obstacle to my creativity. It had started to make me feel like that Susan Minot line I quote above—so I had to stop drinking. Fiona Apple said something about this that resonated with me in her recent Pitchfork interview with Jenn Pelly: “When I was drinking, I felt so guilty and ashamed of myself all the time. You could be mad at me about something, and I would think I was guilty no matter what. I’d be on their side—against me. But then I stopped [in 2018] and I just felt more in control, like I can stand by my choices: picking takes, picking instruments, all of those kinds of things. And I know when I’m right.” Sobriety has worked the same way for me.

“Creation requires energy, which for me means taking good care: eating well, getting exercise, corresponding with friends, reading, and resting—the last of which I haven’t been very good at, historically. I’m trying to get better. I saw something the other day about disambiguating different types of rest: physical rest, emotional rest, mental rest. . . that feels important.”

3. Aside from graphic novels, it isn’t that common to see drawings or visual images embedded in literary fiction books for adults. What made you want to include drawings in the pages of Justine?
It’s true, illustrated literature hasn’t been popular in a long time—I’m thinking back to Charles Dickens—though Phoebe Gloeckner put together an interesting mix of image and text in The Diary of a Teenage Girl. I’ve always illustrated my writing—from the girl detective stories I conjured up as a child to the zines I xeroxed as a teenager.

Ali, Justine’s teenage narrator, struggles to communicate in words. I used illustrations as another way to represent her interior. The images are black and white—just like Ali’s thinking—and at close range, since she doesn’t have much perspective. The image sequences in particular emote for Ali: a makeup compact opens as she warms to a new friend; a cassette tape unravels with a confusing intimate experience; a piece of loose-leaf crumples when she’s unable to have a proper cry.

4. What was the moment when you realized that you would bring the story of Justine to life? What are some of the changes that you made to the book conceptually between the early stages and the point of publication?
The book began as a short story. I received encouragement from the wonderful Ed Park, who suggested it might be the seed of a novel. The expansion began with images: full-color watercolor illustrations of the people, places, and things that felt integral to the narrator’s world. Those images became a kind of visual first draft.

From there, I began to work between images and text, producing what became my MFA thesis. During my final thesis conference, I was told by a prominent novelist to cut the images and rewrite the project as a traditional novel. I was crushed, but I rewrote Justine without them. Still, after finishing that revision, I missed the images—I knew in my heart they belonged. Through editing, the writing had become more economical, so I let go of the watercolor illustrations and redrew everything in black and white to align the verbal and the visual. That’s how Justine came to be.

“Ali, [the] teenage narrator [in my book, Justine], struggles to communicate in words. I used illustrations as another way to represent her interior. The images are black and white—just like Ali’s thinking—and at close range, since she doesn’t have much perspective. The image sequences in particular emote for Ali: a makeup compact opens as she warms to a new friend; a cassette tape unravels with a confusing intimate experience; a piece of loose-leaf crumples when she’s unable to have a proper cry.”

5. What was one of the most surprising things you learned in writing your book?
I learned that time passed is often the best editor. I’ll get stuck, and sometimes it’s as easy as taking the afternoon off and returning to the manuscript the next morning, rested. But often more distance is required, and the only way to move forward with the writing is to go learn something by living life. There’ve been periods I’ve had to set aside writing for months to go out in the world and build my own character.

I’m currently working on my second novel and conceptualizing the third, and as I look toward that third book, I think: I haven’t yet become the human who can write it. I need to learn more about work-life balance, accepting the past and living in the present, especially when it gets uncomfortable. . .

6. I’m sure that you did not envision publishing your debut work in the middle of a pandemic. What adaptations did you have to make to your publication plan? What advice would you give to a writer who is trying to publish their book—not just in general, but especially in this current climate?
This past year, so much of life went online. It’s true, too, for book publication. Of course, bookstore events are virtual, but beyond that: Many early readers now prefer e-galleys, and digital marketing is more important. I am fortunate in that Tin House has done an incredible job adapting to pandemic publishing. If your publisher isn’t as digitally-savvy, you may need to spend more time thinking through how to use email and social media to get the word out.

I also think it’s important to acknowledge that we’re living through a time of great change and uncertainty. Just managing the day-to-day can be exhausting, and to put out a book on top of that—well, it’s wonderful, but it’s also a lot. If you’re approaching publication, see what you can do to clear some space for yourself around it. Space to accommodate the unexpected—or what you certainly can expect, which is to feel a lot of feelings.

“I’m currently working on my second novel and conceptualizing the third, and as I look toward that third book, I think: I haven’t yet become the human who can write it. I need to learn more about work-life balance, accepting the past and living in the present, especially when it gets uncomfortable.”

7. You’ve gone to school both for writing and visual art. Can you talk more about the similarities and differences between your experiences of pursuing both of these crafts in an institutional setting?
I’m grateful to have had these opportunities to study. For me, it was less about the differences between studying writing versus visual art in an institutional setting, and more about the struggle working between the two disciplines simultaneously.

In my experience, the departments were quite separate. There was no image-text program. The system wasn’t set up to support practices that spanned both disciplines. I understand this is changing with greater interest in graphic novels. And, when I studied, there were a handful of instructors who engaged across image and text. (Thank you!) But I did have to do a lot of running up and down both the literal and metaphorical stairs, between the writing and art departments. 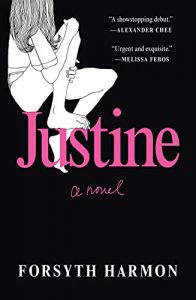 8. Justine is set on Long Island, a strip of American suburban life lying just outside of New York City. What was behind your decision to write about coming of age on Long Island? What is your relationship to place and story?
I grew up on Long Island. It’s physically proximate to New York City, but culturally distant—more like the South or the Midwest. In 2020, Nassau County and Suffolk County were the wealthiest counties in the country to vote for Donald Trump. As a teenager, I was totally unaware of these politics. How do they shape a young woman—in particular, one who’s strongly attracted to another young woman? And what is it like to grow up in a place that celebrates conspicuous consumption, but forbids conversations about class? I needed to take another look at this as an adult.

9. What do you read (or not read) when you’re writing?
I like to read writers’ oeuvres chronologically. I did this recently with Megan Abbott, Raymond Chandler, Kazuo Ishiguro, Toni Morrison, and Yōko Ogawa. It’s a great education in how crafts evolve and themes recur.

10. Which writers working today are you most excited by?
Kazuo Ishiguro is my favorite living writer. I appreciate the restraint in his novels—how so much of what’s important goes unsaid but is still deeply felt. Specifically, I love the narrators in A Pale View of Hills, An Artist of the Floating World, and The Remains of the Day. Ishiguro has this heartbreaking way of depicting and unraveling a character’s self-deception. I was excited to share a March 2 publication date with him this year, and really enjoyed Giles Harvey’s recent New York Times Magazine feature on him. I look forward to reading Klara and the Sun, which is at the top of my TBR pile.

Forsyth Harmon, author and illustrator of Justine: A Novel, has also illustrated The Art of the Affair by Catherine Lacey and has collaborated with writers Alexander Chee, Hermione Hoby, Sanaë Lemoine, and Leslie Jamison. She is also the illustrator of the essay collection, Girlhood, by Melissa Febos. Harmon’s work has been featured in The Believer, Tin House, Virginia Quarterly Review, and The Awl. She received an MFA from Columbia University and currently lives in New York.

The PEN Ten: An Interview with Jamie Figueroa

The PEN Ten: An Interview with Asha Dahya