The PEN Ten: An Interview with Kelley Nicole Girod

1. 25 Plays from The Fire This Time Festival: A Decade of Recognition, Resistance, Resilience, Rebirth, and Black Theater is the first anthology from the Festival, which you founded in 2009. What was one of the most surprising things you learned in editing this book? 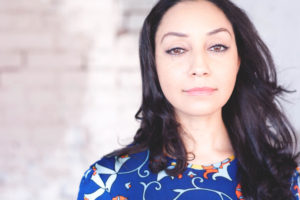 This answer is going to seem like a total “no-brainer” but in putting the anthology together, I didn’t realize that I would need to approach this collection in the same way that I would approach telling a story—thinking about what is the beginning, middle, and end, and where I want the reader to arrive by the end. I thought that an anthology was just a gathering of materials, and I appreciated Bloomsbury really getting me to think about how to structure the “story” of this first collection, rather than simply dividing the plays by the years that they were presented. I was able to see how the plays were in conversation with one another and that was really surprising and exciting.

2. Publishing in the theater world is different from the literary world. What advice would you give to a playwright seeking publication?
Find a publisher that is right for your work and not one that you think is the right one for your work. Putting this anthology together with Bloomsbury was a really beautiful collaboration, and I had a great rapport with the publishing team—that was really important to the process.

“What we are doing with TFTT is documenting ourselves in real time, making a stand on how we define ourselves, and giving those who come behind us a way to do the same for themselves.”

3. Your work as founder and producer of TFTT over the years has led to fruitful collaborations with many accomplished writers across film, literature, and theater. How have your collaborators shaped the writer you are today?
Oh wow. Well, their work is an endless well of inspiration to me, personally, and their stories continue to challenge me as a writer. I’ll look at something someone wrote and think, Wow! How did they do that?! And that inspires me to keep pushing myself.

4. The Fire This Time has created what you describe as, “a space where Black exploration on stage is not only diverse, but exhilarating.” What is that space for you? Are there specific places you keep going back to in your writing?
I always go back home to Louisiana in my own writing. I go back to the spaces where I feel safe enough to push on new boundaries or spend time pushing on a thing, seeing it from new angles and asking deeper questions until I am satisfied with the answer.

5. Tell us about the powerful moment you mention in the introduction when you “realized the power of identity. The currency of identity. The luxury of identity. The confidence that knowing who you are affords one. And ultimately, the role of storytelling in establishing and maintaining identity.”
How does your identity shape your writing? Is there such a thing as a “the writer’s identity?”
Hmm…for me personally a large part of what led me to writing and producing and building the TFTT community was my search for identity. I was always looking for tangible things that could give me a more solid standing in really knowing who I was, really being able to look in the mirror and not feel like I was staring at a stranger. I didn’t grow up knowing a history of my ancestors that was easily accessible to me and that has really driven my own writing in terms of making sure that I am recording who my people were, who they are now and how we are heading into the future. What we are doing with TFTT is documenting ourselves in real time, making a stand on how we define ourselves, and giving those who come behind us a way to do the same for themselves.

“Recording our lived experience is a declaration of our humanity in a world where many of us still aren’t seen as fully human.”

6. Like many leading theater-makers, you navigate sometimes conflicting responsibilities to empower the writers you present, and to focus on your own work. What’s something about your writing habits that has changed over time? 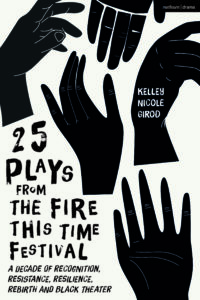 I am so much more organized in my writing than I ever was before I started producing! I’m way more prolific and great at keeping and making deadlines because I know if I don’t, then it won’t get done. Producing makes me prioritize my writing time in ways I hadn’t done when I was only writing.

7. I’d love for you to take a moment to claim writers from the past as part of your literary genealogy. Who would your ancestors be?
Oh wow! Well, I can answer this but the writers are still alive! Yusef Komunyakaa is a big one for me. He is from Bogalusa, LA. and I discovered his poetry in college. His work changed me, it constantly entrances me, I feel, see, and smell everything he writes and I strive for that in my plays. Wole Soyinka is a big one for me as well. Death and The King’s Horseman made me want to be a playwright, and I studied with his best friend in undergrad.

8. You have worked with everyone from Ta-Nehisi Coates at the Apollo to some of the most exciting writers in theater today through TFTT. Which emerging writers are you most excited by?
The ones I have yet to meet. I’m honestly so excited to hear new names that I haven’t heard before. Every year at TFTT we get submissions from playwrights whose names and work I am seeing for the first time and that is exhilarating.

“Someone told me that you have to be a vampire when you write, suck people dry and use that in your writing. I’m sorry, but no. That type of “advice” to me just perpetuates an industry where disrespect and using people is ok, and it’s not.”

9. Having studied under many of the same people as you, I’d love to know what’s the worst piece of advice you’ve ever received on writing?
Ha ha!!! The worst!!! Someone told me that you have to be a vampire when you write, suck people dry and use that in your writing. I’m sorry, but no. That type of “advice” to me just perpetuates an industry where disrespect and using people is ok, and it’s not. I try my best to prioritize respecting everyone that I work with. If they don’t feel respected then I’m not doing my job well.

10. Groundbreaking multi-media artist Nia Witherspoon introduces Section 3 of the Anthology, which you titled, “The Shots Heard Round the World: Policing Black Bodies in White America.” In it, she offers an alternative frame for society to view the Black body, and describes her own work as part of the process, writing “My work offers us apertures inside which I hope we can reimagine the imagination.”
What is the role of a writer in an era of social upheaval? Systemic dehumanization? Senseless destruction?
This is a really good question and one that has probably changed for me over time, because as a younger writer I used to feel that my work needed to actively be “doing something” to make the world a better place. And it’s not that that was a bad goal in and of itself, but it undermined the significance of listening to myself, putting down my voice, and offering it to the world and what that truth could do in terms of stirring people who encountered it.

As writers, we have very little control over how anyone is going to process our work. The writing, the documentation of our lived experience, however we choose to present it, is “enough” in and of itself. So this is a very long way of saying that a writer’s role never changes over time, despite the circumstances. Some of us will write directly to what is happening in the world, some of us will write directly to what is happening to us personally in good times and bad; all of it is valid, vital, and necessary. Our most important job always is to document our experience; this is how people who come after us will know who we were. Recording our lived experience is a declaration of our humanity in a world where many of us still aren’t seen as fully human.

So I say our job is simply to write.

Kelley Nicole Girod is the founder and Executive Producing Director of Obie Award winning The Fire This Time Festival. She is a 2008 graduate of Columbia’s MFA playwriting program where she was a Stein and Liberace Fellow, as well as a John Golden Fellow. Her plays reflect the rich world of her native Louisiana and include Ambrosia, Straight on til Morning, Poetics of the Creative Process, Parabolas, and Watching. She was named Nytheatre.com Person of the Year for her work on TFTT, and is a part of the Indie Theatre Hall of Fame. As a producer her credits include Israela Margalit’s Get Me A Guy, and Night Blooming Jasmine (both at Horse Trade Theater); Louisiana Mon Amour (Women Center Stage at Culture Project); Thais Francis’s Outcry (Horse Trade Theater, Jack). She is a mother to two beautiful daughters, Penelope Evelyn and Noelle Anamaria.