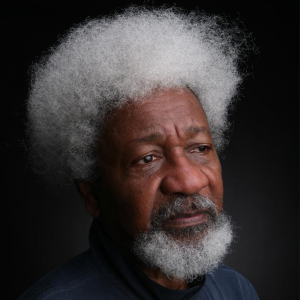 A Yoruba born in Western Nigeria and educated in Ibadan and the University of Leeds in England, Wole Soyinka was the first African to win the Nobel Prize for Literature in 1986. He has authored over 40 works in the medium of plays, novels, poetry, essays, and biographies, many of which have received worldwide translations as well as theater performances. He is active on artistic, academic, and human rights organizations such as the International Theatre Institute, UNESCO, and the International Parliament of Writers, among others. He is the recipient of numerous academic and national honors, and holds traditional titles in his own country. Soyinka continues to lecture extensively within Nigeria and internationally, and currently holds positions as Professor Emeritus at Obafemi Awolowo University (Ile-Ife, Nigeria), Hutchins Fellow at Harvard University (United States), and Honorary Fellow at Churchill College (Cambridge, UK).

The Lion and the Jewel and Death and the King’s Horseman are among his most celebrated plays, while his poems are collected in Idanre and Other Poems, Mandela’s Earth and Other Poems, and Samarkand and Other Markets I Have Known. His autobiographical works encompassing childhood, youth, and adult political and literary activities comprise of Aké: The Years of Childhood, Ibadan: The Penkelemes Years, and You Must Set Forth at Dawn. His corpus of prose fiction, The Interpreters and Season of Anomy, will be augmented in November 2020 with his latest novel, Chronicles from the Land of the Happiest People in the World (BookCraft).

He is married, with children, and lives in Ijegba, Abeokuta, Ogun State.