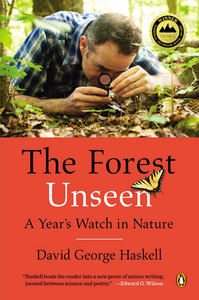 Two Tibetan monks lean over a table, cradling brass funnels in their hands. Colored sand spills from the tips of the funnels onto the table. Each fine stream adds another line to the growing mandala. The monks work from the center of the circular pattern, following chalk lines that define the fundamental shapes, then filling in hundreds of details from memory. A lotus flower, symbol of Buddha, lies at the center and is enclosed by an ornate palace. The four gates of the palace open out to concentric rings of symbols and color, representing steps on the path to enlighten­ment. The mandala will take several days to complete, then it will be swept up and its jumbled sands cast into running water. The mandala has significance at many levels: the concentration required for its cre­ation, the balance between complexity and coherence, the symbols embedded in its design, and its impermanence. None of these qualities, however, define the ultimate purpose of the mandala’s construction. The mandala is a re-creation of the path of life, the cosmos, and the enlightenment of Buddha. The whole universe is seen through this small circle of sand. A group of North American undergraduates jostle behind a rope nearby, extending their necks like herons as they watch the mandala’s birth. They are uncharacteristically quiet, perhaps caught up in the work or stilled by the otherness of the monks’ lives. The students are visiting the mandala at the beginning of their first laboratory class in ecology. The class will continue in a nearby forest, where the students will create their own mandala by throwing a hoop onto the ground. They will study their circle of land for the rest of the afternoon, observ­ing the workings of the forest community. One translation of the San­skrit mandala is “community,” so the monks and the students are engaged in the same work: contemplating a mandala and refining their minds. The parallel runs deeper than this congruence of language and symbolism. I believe that the forest’s ecological stories are all present in a mandala-sized area. Indeed, the truth of the forest may be more clearly and vividly revealed by the contemplation of a small area than it could be by donning ten-league boots, covering a continent but un­covering little.

The search for the universal within the infinitesimally small is a quiet theme playing through most cultures. The Tibetan mandala is our guiding metaphor, but we also find context for this work in West­ern culture. Blake’s poem “Auguries of Innocence” raises the stakes by shrinking the mandala to a speck of earth or a flower: “To see a World in a Grain of Sand / And a Heaven in a Wild Flower.” Blake’s desire builds on the tradition of Western mysticism most notably demon­strated by the Christian contemplatives. For Saint John of the Cross, Saint Francis of Assisi, or Lady Julian of Norwich, a dungeon, a cave, or a tiny hazelnut could all serve as lenses through which to experience the ultimate reality.

This book is a biologist’s response to the challenge of the Tibetan mandala, of Blake’s poems, of Lady Julian’s hazelnut. Can the whole forest be seen through a small contemplative window of leaves, rocks, and water? I have tried to find the answer to this question, or the start of an answer, in a mandala made of old-growth forest in the hills of Tennessee. The forest mandala is a circle a little over a meter across, the same size as the mandala that was created and swept away by the monks. I chose the mandala’s location by walking haphazardly through the forest and stopping when I found a suitable rock on which to sit. The area in front of the rock became the mandala, a place that I had never seen before, its promise mostly hidden by winter’s austere garb.

The mandala sits on a forested slope in southeastern Tennessee. One hundred meters upslope, a high sandstone bluff marks the western edge of the Cumberland Plateau. The ground falls away from this bluff in steps, alternating level benches with sharp inclines, descending one thousand feet in elevation to the valley floor. The mandala nestles be­tween boulders on the highest bench. The slope is entirely forested with a diverse collection of mature deciduous trees: oaks, maples, bass­woods, hickories, tuliptrees, and a dozen more species. The forest floor is ankle-twistingly strewn with jumbled rock from the eroding bluff, and in many places there is no even ground, just heaved, fissured stone overlain with leaf mulch. The steep, challenging terrain has protected the forest. At the bot­tom of the mountain, the fertile, level soil on the valley floor is relatively free of rocky encumbrances and has been cleared for pasture and crops, first by Native Americans, then by settlers from the Old World. A few homesteaders tried to farm the mountainside in the late nineteenth and early twentieth centuries, a task that was as hard as it was unproductive. Moonshine stills gave these subsistence farmers extra income, and this mountainside got its name, Shakerag Hollow, from the way townspeo­ple would summon the distillers by waving a rag that was then left with some money. A jar of strong liquor would take the place of the money some hours later. The forest has now reclaimed the small agricultural openings and still sites, although the locations of the old clearings are marked by rock heaps, old pipes, rusted washtubs, and daffodil patches. Much of the rest of the forest was logged for lumber and fuel, especially at the turn of the twentieth century. A few small pockets of forest were left untouched, shielded by inaccessibility, luck, or the whims of land­owners. The mandala sits in one such patch, a dozen or so acres of old-growth forest embedded in thousands of acres of forest that, although it has been cut in the past, is now mature enough to sustain much of the rich ecology and biological diversity that characterize Tennessee’s mountain forests.

Old-growth forests are messy. Within a stone’s throw of the man­dala, I see half a dozen large fallen trees in various stages of decompo­sition. The rotting logs are the food for thousands of species of animals, fungi, and microbes. Downed trees leave gaps in the forest canopy, creating the second characteristic of old-growth forests, a mosaic of tree ages, with groups of young trees growing next to thick-trunked elders. A pignut hickory with a trunk a meter wide at its base grows just to the west of the mandala, right next to a crowd of maple saplings in a gap left by a massive fallen hickory. The rock on which I sit is backed by a middle-aged sugar maple, its trunk as wide as my torso. This forest has trees of all ages, a sign of the historical continuity of the plant community.

I sit next to the mandala on a flat slab of sandstone. My rules at the mandala are simple: visit often, watching a year circle past; be quiet, keep disturbance to a minimum; no killing, no removal of creatures, no digging in or crawling over the mandala. The occasional thoughtful touch is enough. I have no set schedule for visits, but I watch here many times each week. This book relates the events in the mandala as they happen.