The Extravagant Behavior of the Naked Woman 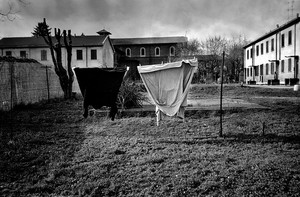 This week, in place of our regular Guernica/PEN Flash series, we’re featuring two stories from Flash Fiction International, published earlier this year by W.W. Norton. This piece comes to us from Mexican writer Josefina Estrada. Read an interview with one of the anthology editors, Christopher Merrill, here.

The woman who walks naked through the streets of Santa María provokes astonishment in the children, delight in the men, and incredulity and anger in the women. She sits down at the corner of Sor Juana Inés de la Cruz and Sabino, next to the bicycle repair shop. The children come out of the two adjacent slums and cross the street to watch her as she sniffs glue from a bag, her only possession. She doesn’t seem to care that she’s naked, yet neither could you say that she’d made a conscious decision to display her dark, abundant flesh.

Even when she’s sitting down you can tell she’s a woman of vast stature. At shoulder level, her hair is a mass of tangles that contains balls of chewing gum, bits of earth, dust and fluff. The applause and whistles of the onlookers grow louder when she opens her legs and begins to scratch herself hard in the most impenetrable part of her being. At this point, the young men, who are always hanging around, can’t suppress their laughter. Instinctively, as if fearing that at any moment they too might reveal their mysteries, they finger the flies of their trousers.

And when the woman lies down and turns her back on them, the onlookers begin throwing things at her. She takes a while to react, but they all know that as soon as she sits up, she’ll get to her feet and chase her attackers. And the children will then be able to see that her breasts are not, in fact, stuck fast to her ample abdomen. Some of the smaller children go and tell their mothers that “the woman who wears no underpants or anything” is on the loose again. And their mothers forbid them to go back outside.

There was a period when she was seen by several women near where Aldama crosses Mina. Then for two years she prowled up and down Avenida Guerrero. She would go to sleep surrounded by a pile of clothes donated by well-meaning people, and which served as both pillow and mattress. When she grew tired of her bundle of clothes, she would burn it using the same solvent she inhaled.

The huge, dark woman goes into building sites to wash. The glee of the workers reaches its height when she bends over to drink from the tap. They’re beside themselves with excitement when she picks up handfuls of lime and powders her armpits. Any man bold enough to approach her has always been repelled by the ferocity of her insults. The women who live around Calle Sor Juana complain not about the exhibition she makes of herself but about the fact that she’s freer than the men. Instead of putting an end to the extravagant behavior of this woman—which arouses lewd thoughts even in the most saintly of men—the police, they say, spend all their time arresting drunks.

Josefina Estrada is a Mexican story writer, novelist, and journalist. Among her books are the story collection Malagato and the novels Desde que Díos amance and Virgen de medianoche. Her work has previously appeared in English in Storm: New Writing from Mexico and Sudden Fiction Latino: Short-Short Stories from the United States and Latin America.

Margaret Jull Costa has been a literary translator for nearly thirty years and has translated novels and short stories by such writers as Eça de Queiroz, Fernando Pessoa, José Saramago, Javier Marías, and Bernardo Atxaga. Her most recent award was the 2012 Calouste Gulbenkian Translation Prize for Teolinda Gersão’s The Word Tree.

Last week, authorities in Belarus raided the homes of dozens of journalists and activists, according to a human rights group, in what appeared to be the biggest one-day crackdown on dissent in the past three months. https://to.pbs.org/3IpQMaK

"Oxxxymiron and Noize MC’s brash style and straight-talking lyrics represent something the Putin regime clearly views as dangerous to its grip on power: a younger generation who refuse to accept the status quo.” Read our take on Russia targeting rappers http://bit.ly/3y7bGXA

To celebrate the launch of the 2021 PEN America Prison Writing Awards anthology, author and journalist Herb Boyd will be reading the profound and contemplative words of Leo Paul Carmonia in his piece “Growing Pains” on 12/15. Register here: http://bit.ly/311SFcA.