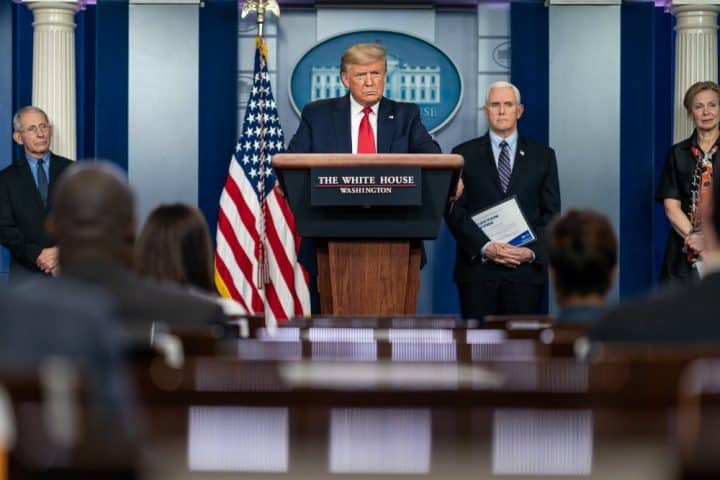 This piece was originally published on Medium.

The cable networks should stop treating President Trump’s news conferences as must-see television with banner coverage. While there’s an argument that anything a President does is newsworthy, these daily sessions risk indoctrinating the media and the public to a false narrative about the course of the pandemic and the efficacy of the federal government’s response. Reporters should relay his major points only once they have had a chance to check their veracity, accuracy, and completeness, and to provide essential context. If Trump believes he is entitled to highly visible live coverage, he can earn that right with candid, factual briefings that honestly reflect the dire state of affairs and how it arose.

With a normal presidential administration, there would be no debating the news value of regular official updates amid a national crisis. Whether 9/11, a hurricane, or a war, in-person, frequent briefings for the press are a mainstay of a free society and a vital channel to allow the public to hold their leaders accountable. Briefings by WHO officials and state governors like Michigan’s Gretchen Whitmer or Maryland’s Larry Hogan are not controversial. As long as leaders are methodical, forthright and factual, news organizations do a service by making these reports easily accessible.

But Donald Trump is no ordinary president. His regular, well-documented lies, baseless and misleading statements, attacks on critics, ethnic baiting, bullying of senior officials, and relentless self-admiration render his briefings like those of no other president. He uses his turns at the podium to needle and insult members of the press, calling journalists who ask tough questions incompetent, malign, and nasty. Trump’s loose talk about a then-unproven treatment led to a run on drugstore supplies of hydroxychloroquine, interfering with the ability of lupus sufferers to obtain needed medication. In one case, a man died after self-administering the drug shortly after it was touted by the president.

Tuning down coverage of the President’s live news conferences would not impair Trump’s right to speak, nor American’s ability to listen in. We’re no longer in an age where three networks are the prime news source for most Americans. Those who wish to view the president’s live briefings can go to the White House website, its Twitter feed, or C-SPAN, circumventing the mainstream news media entirely. Given that, there is no reason news organizations shouldn’t provide links to the live streams for those who seek them out on their sites.

The experience of the 2016 election offers a cautionary tale. Back then big cable networks aired hours of uninterrupted coverage of Trump’s campaign rallies and stump speeches. For a time, they were novel and thus newsworthy, partly because of his disregard for truth and merciless takedowns of critics. Their newsiness soon devolved into pure shock value, and then to crude ratings fuel. The news media then found themselves sucker-punched when all that juicy coverage helped vault Trump to the White House. Trump may have hoodwinked the press the first time around. But four years later there is no excuse for media outlets broadcasting the President’s bloviations or advancing his deceptive narrative that the US response to COVID-19 has been anything but the world’s most disastrous and deadly. Amid a historically unprecedented health crisis, journalism organizations that want to remain reputable must put accuracy before eyeballs, fulfilling a duty to the public to tell the COVID-19 story as it is, not as the President might wish it to be.

If the President wants daily live coverage, he needs to use his bully pulpit in the way it was intended. Daily briefings should not be platforms for delusory political horn tooting. Trump’s broken-record trumpeting of the decision to terminate flights from Wuhan into the United States in January — the one thing he got right — overlooks the cascading failures that have led to vast, unresolved shortfalls in testing, protective gear, and ventilators. The U.S. — despite its wealth, health expertise, expansive bureaucracy and innumerable other advantages — faces the highest COVID-19 caseload of any nation in the world paired with unprecedented, prolonged and unavoidable economic meltdown. Under these circumstances, self-congratulation by the Administration must have no place on the nightly news.

New York Gov. Andrew Cuomo offers a model for winning over audiences with measured, vetted information. In his regular briefings, Cuomo begins with data and charts, and then shifts gears to a segment clearly labelled “Opinion” in which he shares his own views. When his health experts are asked a question and go beyond established facts, he has been known to jump in, saying “Opinion!” His attention to delineating where the science stops and the speculation begins helps the public know how to interpret what they hear.

If Trump wants to be on air, he needs to leave the science to the scientists. No president should be opining on treatments or clinical trials other than to announce final decisions made by U.S. health agencies. His ruminations on experimental protocols are speculative and can have deadly consequences. If such medicines are discussed at all, it must be by health professionals with who know what they can responsibly say and not say.

And when experts are invited to take part in the briefings, there should be no doubt that the views they express are their own. Officials and CEOs who parrot ritualized, effusive praise for the president each time they take the podium come off as sycophants rather than trusted spokespeople. While no one doubts the professionalism of Dr. Anthony Fauci and Dr. Deborah Birx, their poker faces and parsed words bring to mind hostages mindful that one errant turn of phrase could result in ruin. Trump should make clear that the experts are on hand to speak freely and forthrightly, without fear of consequence.

Knowing Trump, he will never take these steps. But unless and until he does, the news media is not only justified, but obligated, to stop serving as his mouthpiece.

Suzanne Nossel is CEO of the literary and free expression organization PEN America, and the author of the forthcoming book DARE TO SPEAK: Defending Free Speech For All.

The PEN Pod: Writing as Witness with Wayétu Moore

Criticize @CNN and the media all you want. But for protesters against police violence to target a news building, shatter windows and vandalize is a big win for Trump's campaign to invert facts and sow confusion about what we're fighting against https://nypost.com/2020/05/29/protesters-storm-cnn-building-in-fiery-atlanta-protest/

Police attacks on journalists covering protests are now spreading like their own sick contagion. Local @NBCNews reporter @KaitlinRustWAVE is targeted by rubber bullets while covering demonstrations in Louisville KY. https://www.wave3.com/2020/05/29/wave-news-reporter-hit-with-rubber-bullets-during-louisville-protest/

📣📣 Proud to announce this summer program @PENamerica for college and high school students to learn about free speech and advocacy!!📣📣 #freespeech2020 https://twitter.com/PENamerica/status/1266519442369937408