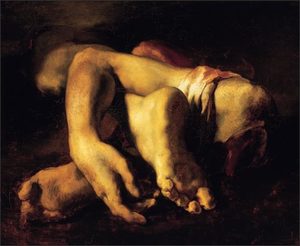 Wherever he goes, in his sling bag
He carries his severed leg. If he has to shake hands,
He takes his severed leg out from the bag,
And touches it on the other person’s hand
As he says ‘Nice to meet you’
He must have gone through a lot of suffering
With that severed leg in his bag,
Though he still has his two legs intact.
When he needs reassurance, he’ll insert his right hand,
Like a dead hand, into the bag slung on his right shoulder,
To feel the sinews and greasy slime of the severed leg.
That’s how he recharges himself.
That’s how his pride is uplifted; his self-confidence restored.
The severed leg serves as his pillow when he sleeps.
The severed leg is placed on the dining table when he eats.
(Is he married? Let’s say he is.)
When he makes love to his wife,
The severed leg welds their two bodies together.
(Only then does he feel the hit, he says.)
The severed leg is his life, his past, his present and
His future, he says. ‘It’s truth’, he says.
‘It’s honesty’, he says.
‘It’s just him”, (says someone else).
Someone who claims to be a childhood friend.
He too always carries a sling bag.