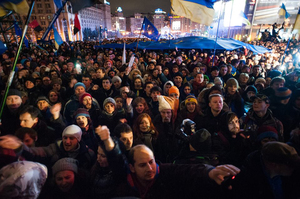 “We are For Freedom of Speech and Against Violence”

To tell the truth and to create meaning are both professional and civic duty for the writing community, writers, and journalists. The word is the only tool for creating meaning and reflecting reality.

Today, the Russian authorities use the word to destroy meaning, and that is, undoubtedly, a crime against culture. Words that elicit an emotional response for so many Russians—Fascism, Junta, Nazism— serve as catalysts for aggression and hatred. Recently the authorities have expanded their vocabulary with such words as “traitors to the nation” and “fifth column”—concepts that originated from the most difficult times for our civilization. These words are used to label those who openly express their own opinion that differs from the officially accepted one.

But, besides the labeling words, the authorities have a legislative machine at their disposal.

Today, free self-expression is equated to terrorism. Vile and unconstitutional laws on rehabilitation of Nazism, on slander, on bloggers, and calls for separatism criminalize public speech and provide the state with a monopoly on creating meaning. Violence toward the word and meaning inevitably grows into physical violence. Escalation of deceit grows into escalation of military activity. And that is exactly what we can observe, looking at the war in Ukraine today.

Having started with the lies about the violence in Crimea, it led to dozens of casualties in the southeast of Ukraine. The journalists, who were awarded by the president a day before Press Day, were the soldiers in this war. Their lies bore fruit of blood and death, and their deceit and hysteria that caused great damage to the public conscience in Russia were referred to as “objective reflection of events” in award lists, signed by the president.

We are unable, for both moral and professional reasons, to put up with desecration of the word and destruction of meaning.

We will continue to openly express our position in the future and will continue our dialogue with our friends and colleagues in Ukraine, so together we can stand against the deceit and violence.

We know the power of the word better than officials or politicians.

And that is something we will not back away from.

An anti-abortion law that would make it illegal to share abortion information on the Internet raises serious concerns about freedom of speech nationwide. https://bit.ly/3zAnNxs