The PEN/Voelcker Award for Poetry Collection, established by a bequest from Hunce Voelcker, is given annually to a poet whose distinguished collection of poetry, published in the applicable calendar year, represents a notable and accomplished literary presence. The work will have expanded the scope of American poetry.

The annual award recognizes the importance of the poetry collection as an art form, with no restrictions on the career status of the poet. The award is for a permanent U.S. resident or citizen, of any age and writing in any poetic style, and carries a cash prize of $5,000.

This award was previously administered as the biennial PEN/Voelcker Award for Poetry.

All winners, finalists, and longlisters for this award are eligible to receive PEN America’s official emblems. If you are a publisher and interested in obtaining PEN America’s award emblem, please write to [email protected]. For more information, please visit our FAQ page.

From the judges’ citation: “Victoria Chang’s Obit was an extraordinary collection among a pool of extraordinary collections for this year’s award. Obit’s conceptual brilliance is wired with intensity and intimacy. Chang writes about deep personal grief in a way that feels expansive and inviting, never sacrificing intelligence and heart. One of the strengths of this remarkable book is its resistance to reduction. Chang employs elements of journalism, essay, and poetry amid her columns of justified text. The traditional elegy is reformulated with the immediacy of an obituary notice. Chang shifts between lyrical prose poems and maverick tankas. A sensational, caesura-filled sequence of fourteen-liners reads as if she was channeling Sylvia Plath and Gerard Manley Hopkins at the same time. She shifts between familial elegies, self-elegies, and cultural elegies until the elegy becomes almost unrecognizable to itself. It is a love poem, testimonial, archive, catalog. Like the decorum of the elegy, the decorum of the obituary is disrupted by music, mischief, and defiance. The news of Obit alerts us to the death of ‘The Ocean,’ ‘The Bees,’ ‘Privacy,’ ‘Civility,’ ‘America.’ The news alerts us to the idiosyncrasy in the death of ‘Hindsight,’ ‘Clothes,’ ‘Tomas Tranströmer,’ ‘Victoria Chang.’ Mourning is enlivened by the poet’s mercurial meditations on language and loss. The shock of trauma is shaped into an alertness for life.

“The singularity of memorial loss merges with the ubiquity of quotidian loss, but these diurnal poems do not inspire resolution so much as resolve. A reader finds the societal and spiritual tethered to the everyday. William Carlos Williams famously wrote that men die for lack of the news found in poetry. Victoria Chang finds the poetry in the news of the obituary. She mines a resourcefulness instigated by grief. She reveals the levity tethered to gravity; the wonder tethered to uncertainty. ‘Death isn’t the enemy,’ Chang writes, ‘Knowledge of death is the enemy.’ Her poems are shaped by the knowledge of the unknowable. Somehow haunting and ecstatic, Obit is shaped by the skills of a remarkable poet.” 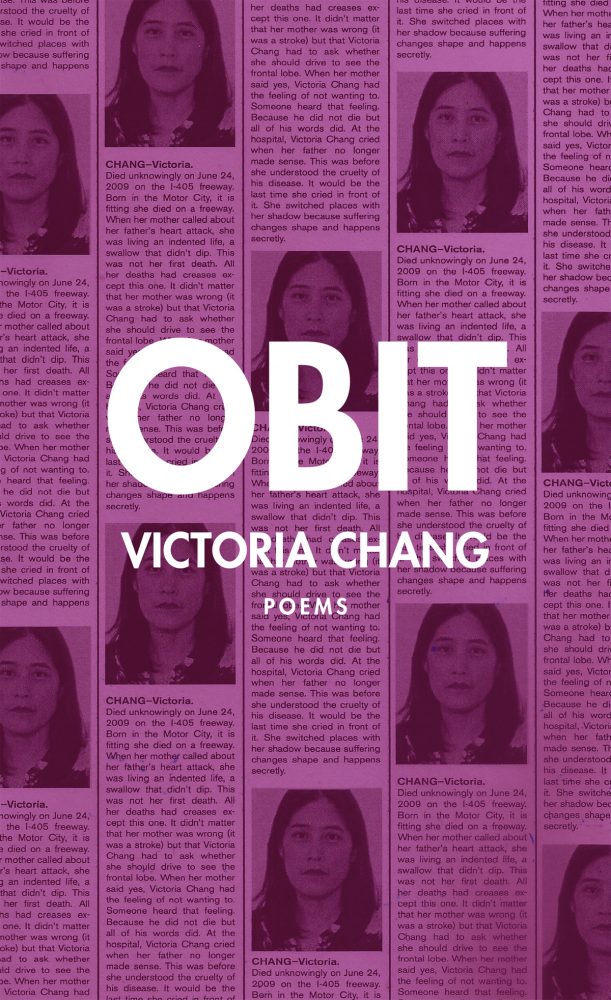 Learn more about the PEN/Voelcker Award for Poetry and past winners here.