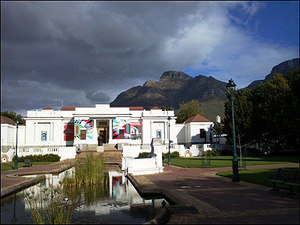 I just returned from a fabulous trip to South Africa, where I traveled on behalf of PEN American Center with the poet Cathy Park Hong as part of our new programmatic exchange with South African PEN.

Cathy kicked off her trip by performing poetry at a local high school in Cape Town, dazzling the students with her lipograms, a form of poetry in which the entire poem utilizes only one vowel. I started my journey in Johannesburg at the African Leadership Academy to serve as its first Expert-in-Residence of the new school year. This school, which I will write about at greater length, prepares students from all over the African continent to become entrepreneurs and successful citizens. I conducted a workshop for a writing class on short stories, and I gave an Executive Seminar on entrepreneurship and free expression, with a special focus on technology companies. The students had spontaneously formed their own PEN club, with a slate of activities planned for the coming year. After speaking with the students, I met with South African PEN members to get a better feel for their needs and goals, including Nic Dawes, editor of the Mail & Guardian, Anton Harber, director of the journalism school at the University of Witswatersrand, Mandla Langa, the poet and novelist, and journalist Raymond Louw.

I continued on to join Cathy in Cape Town to participate in the Open Book Festival, an exciting new literary event that promotes established and emerging writers. Founded by Frankie Murrey and Mervyn Sloman, the festival celebrated dozens of writers from all over the African continent in the Central Business District of Cape Town. “Open Book has three primary objectives,” Murrey explained, “to put on a world class international festival, to promote local authors to a global audience, and to build a love of books and reading amongst the youth of Cape Town. It is largely through partnerships that we meet those objectives and we are keen to deepen the existing relationship between PEN American Center and ourselves.”

Writers included Rotimi Babatunde, winner of the 2012 Caine Prize for African Literature, as well as poets Antjie Krog and South African author Andre Brink. (We also discovered, to our surprise, that PEN/E.O. Wilson Prize winner James Gleick was in attendance to discuss his new book The Information). Open Book donated books to a school library in the neighborhood of Mitchell’s Plain and partnered with other festivals as part of the Word Alliance. Etonnant Voyageurs sent Francophone writers from France, Haiti, and Africa, and the Edinburgh Writers Festival sent a host of novelists and columnists from the United Kingdom.

Author Keith Gray, a young adult fiction author who has published over eight novels, sparked a lively discussion about censorship with a speech that described the unique challenges of reaching young adult audiences. “What keeps us awake at night,” Gray explained, “what makes us rewrite and redraft and rewrite, what we’re terrified of finding lurking beneath our beds when the lights go out, are the gatekeepers.” (Read the full speech here.) The conversation was particularly appropriate in South Africa, where the country has recently grappled with censorship in art as well as draconian legislation targeting the press.

PEN American Center has been able to strengthen our partnerships with South African PEN through generous grants from the Jerome L. Greene Foundation and the Ford Foundation. On the second day of the festival, Cathy and I joined South African PEN Excutive Vice President and novelist Margie Orfordin a discussion about the international work of PEN on free expression. Cathy, we discovered, is not only an accomplished poet, but also a former journalist who used to cover North and South Korea, even translating Korean authors into English. South African PEN is expanding and trying to harness the power of a new generation of exciting writers. Its latest partnership entails working with the Nal’ibali campaign, a grassroots literacy campaign that encourages reading as a baseline requirement for democratic citizenship. Once a week, Nal’ibali releases a free reading supplement with stories for children and adults in Avusa Media newspapers.

Our collaboration with PEN American Center and the Open Book exceeded our expectations. South Africa is at a critical juncture in terms of creativity but the country faces a number of free expression challenges.  It was wonderful to welcome Cathy Park Hong. Her poetry is invigorating and fresh. Her linguistic virtuosity, her creativity with multiple identities and language had so much to offer South African audiences of readers and writers. We hope in the future to welcome more writers from PEN American Center and to bring some of South Africa’s exciting new voices to US audiences. We are already in the first stages of planning how we will take the discussions we had at the 2012 Open Book further and deeper in 2013. It was an enriching and lively exchange and both the differences and the parallels between South Africa and the US make for a lively literary and political exchange.

Over the course of the week, with the stunning Table Mountain looming above us, I was struck by the desire of these accomplished writers to engage with free expression issues. While not everyone agreed on the limits of free expression—especially given the “Innocence of Muslims” video (which no one seemed to have watched)—I left with the feeling that literature’s ability to explore ambiguity and nuance provides a vital lens into free expression debates, which tend to focus on extreme examples of expression rather than the typical speech that affects our daily lives.

Having lived and worked in South Africa myself, and studied fiction in Cape Town, I was also impressed by the variety of new voices on the writing scene, including authors such as Eric Miyeni, a television star and author, and Jamala Safari, a refugee from the Democratic Republic of Congo who taught himself to read and write in English.

Cathy’s role as cultural ambassador can’t be overstated. Following on the heels of her new collection, Engine Empire, she wowed crowds with her playful and dynamic use of language. “Cathy’s amazing,” festival co-director Frankie Murrey gushed. “She’s interesting, she’s dynamic, she has an original voice, and then you see her at an event and she’s completely compelling, not just in conversation, but once she starts reading—I don’t even have the proper words for it—she’s just an incredible reader. It’s not often that you hear that kind of voice or someone who is able to switch between voices so fluently and gracefully.”

I couldn’t agree more. We hope that our visit to the Open Book Festival marks the beginning of an exciting and longlasting partnership with South African PEN.

Did you know that women’s voices make up less than 1/3 of the work translated from other languages into English? Starting tomorrow, join us for a Women in Translation (#WiT) Month reading series promoting gender & cultural diversity in literary publishing: https://bit.ly/3gRlgGf

Reflections on India at 75 — 100 authors, from Perumal Murugan and Geetanjali Shree to Salman Rushdie and Jhumpa Lahiri, on our future.

Glad to be part of this anthology. Thank you, @PENamerica, for putting this project together.