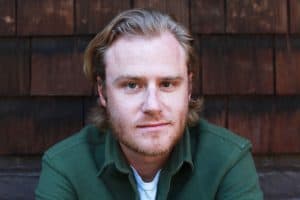 The PEN Ten is PEN America’s weekly interview series. This week, Hafizah Geter, editor at Little A and Day One from Amazon Publishing, speaks to poet and Stegner fellow William Brewer, whose poetry collection, I Know Your Kind, is out this week.

Hafizah writes: By now we’ve all seen the studies that show reading improves one’s empathy. And if you’re a writer, you’ve probably been told that if you want be a better writer become a better reader. Perhaps no greater proof of this exists than in poet Will Brewer. In the years I have known him, Will has proven to be one of the most voracious readers I’ve ever encountered. Perhaps, this is most evident in his writing. In one of the best poetry books of 2017, Will employs the language of ruin to excavate the lost and to reach into the heart of the opioid epidemic ravishing his home state of West Virginia. In his debut collection, I Know Your Kind, selected for the National Poetry Series by Ada Limón, the only thing more open than Will’s mind is his heart as he enters the lion’s den of addiction. Will approaches, with equal compassion and empathy, the loved ones ravaged by opioids alongside the family members who enable and the ones who shut tight their doors. Will examines how, in the hills of Appalachia, addiction can be a tradition as fiercely rooted as the landscape and as seemingly insurmountable as the poverty that crushes it. With his full, huge heart, Will champions the humanity of the lost and forsaken, the loved ones turned drug addicts turned walking dead and those who stay and hold onto what remains. Read more of Will’s work at: williambrewer.net.

When did being a writer begin to inform your sense of identity?
I was a visual artist before I was a writer. My reading/writing life didn’t begin until high school, with no serious literary or “writing” education until I was 18. Visual art taught me about the primacy of careful, deliberate observation. Making the shift to writing was, at its core, about translating that sense data into a word-based, instead of visually-based, language. Whether it’s a painting or a poem or a passage of prose, my goal is to make someone see, which goes back to the position of observer, which I think I’ve always been.

Where is your favorite place to write?
I do it at a desk in my apartment. I have a dream of a nice studio, but until then, the desk works fine.

Obsessions are influences—what are yours?
For me, at the atomic level, the obsession around which all my other obsessions orbit is seeing and making others see. That is because—and maybe this is at the subatomic level—this is the closest I get to a spiritual, or more generally mystical, experience. Reading a passage by Woolf, seeing a painting by de Kooning, or entering the state while writing when I dissolve and my imagination/mind takes over—these are experiences that press me up against The Mystery. Anything I choose as a subject I choose because I see cracks of The Mystery shining through. To quote a line by DeLillo: “I want to immerse myself in American magic and dread.”

What is the most daring thing you’ve ever put into words?
I don’t think I’ve ever been daring with words.

What is the responsibility of the writer?
To write to the absolute best of their abilities. Only through that can the other work happen.

While the notion of the public intellectual has fallen out of fashion, do you believe writers have a collective purpose?
Writers keep us connected to our language—its power, its vitality, and its vulnerability.

Recognizing years of cultural theft and appropriation, to whom would you like to give back the crown?
Isn’t the crown the problem?

How has the very public mainstreaming of bigotry and more visible and documented police violence resonated in your personal life and writing?
I don’t think I can say that these things have resonated in my writing specifically. That said, my book argues for a humane engagement with, and examination of, the opioid epidemic, which law enforcement has treated primarily as a criminal crisis. That said, some really positive changes have been made, primarily at the local level, to treat this as the health crisis that it is. Some federal progress was made as well, but that has since been turned back by the current administration (shocker). The criminal approach as the default response is representative of power’s irrepressible drive to dehumanize. I’d like to think my work pushes against that.

What book would you send to a government leader, domestic or foreign, who censors (or inhibits) marginalized and/or dissenting voices?
I’m a great admirer of Primo Levi, so something by him would be a good start, but my guess is that anyone that exhibits these tyrannical impulses isn’t much of a reader.

Where is the line between observation and surveillance?
The answer is in the words, in their very origins. To paraphrase etymonline.com: Surveillance comes from the French, meaning “oversight, supervision, watch,” but even more precisely, “a word that came to English from the Terror in France (‘surveillance committees’ were formed in every French municipality in March 1793 by order of the Convention to monitor the actions and movements of suspect persons, outsiders, and dissidents).” As for observation, going back even before it meant “watch, perceive, notice,” is Latin observare, “watch over, note, heed, look to, attend to, guard, regard, comply with,” from ob “in front of, before” + servare “to watch, keep safe.” One is from a position of power. One is from a position of care.

William Brewer is the author of I Know Your Kind (Milkweed Editions, 2017), a winner of the National Poetry Series, and Oxyana, a 2016 Poetry Society of America Chapbook Fellowship selection. Currently a Stegner Fellow at Stanford University, he lives in Oakland.

Born in Zaria, Nigeria, Hafizah Geter serves on the board of VIDA: Women in the Literary Arts, and co-curates the reading series EMPIRE with Ricardo Maldonado. Her poems have appeared or are forthcoming in The New Yorker, Tin House, Narrative Magazine, Gulf Coast, Boston Review, Los Angeles Review of Books, and West Branch, among others. She is on the poetry committee and book ends committee for the Brooklyn Book Festival and is currently an editor for Little A and Day One from Amazon Publishing.