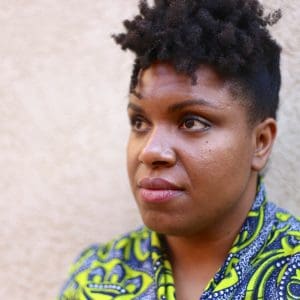 The PEN Ten is PEN America’s weekly interview series. This week, Hafizah Geter, editor at Little A and Day One from Amazon Publishing, speaks to poet and Lambda Literary fellow Ife-Chudeni A. Oputa, whose debut poetry collection, Rummage, is out this week.

Hafizah writes: Edited by Morgan Parker, Ife-Chudeni A. Oputa’s Rummage was selected by Jericho Brown, Cornelius Eady and Kimiko Hahn for the 2015 Little A Poetry Contest. Full of startling moments, Ife-Chudeni’s poems offer unflinching examinations into the human experience, including meditations on being, blackness, gender, as well as beautiful and necessary confrontations with the shames we all carry. In her poem “We are sitting around my shame” she says: “or it is settling in around me— / one more metaphor of silent tongues. // This time let it be teeth—they can already hold / so much: wisdom and wishes and rot.” Consider Rummage the teeth, here to tear through the silences that imprison us.

It snuck up on me somewhere in the last five to seven years, I guess. I think every time I wrote and chose to write the truth, writing informed my identity a little more. I can probably trace that process back to January of 2009. Then fast-forward to summer 2013, when I had the privilege of joining the Callaloo Creative Writing Workshop and the Cave Canem retreat, both for the first time and back to back. It was an intense, three-week immersive in blackness and writing and existing, and I came out of it choosing to write the truth full time.

Where is your favorite place to write?
In unplanned, in-between places. Often a bus or a train, a waiting room, or a boat if I’m lucky.

Obsessions are influences—what are yours?
I’m obsessed with memory. It is so much the foundation of who we are and what we know, and yet as foundations go, it’s incredibly unstable and fissured. I find its unreliability to be in turns terrifying and rapturous, depending on how comfortable I’m feeling with uncertainty at a given moment. For my writing, I’m best-off when I delight in our tenuous relationship with memory. Also, the body is an obsession. For all the same reasons really. These things—body & memory—that are almost all that we are, that are almost all that we can control, and yet they keep us so in the dark, so disconnected from our own truths. Fascinating and terrifying.

What’s the most daring thing you’ve ever put into words?
“Daring” doesn’t exactly feel precise, but the last three lines in the poem “We are sitting around discussing our shame.”

While the notion of the public intellectual has fallen out of fashion, do you believe writers have a collective purpose?
It’s not in my authority to define the purpose of any individual, let alone a collective of folk. I do think writers have a collective function: to document. We take a moment, thought, idea, invention, and craft a representation of it that is arguably more permanent and static than memory, if not always more honest or reliable.

Recognizing years of cultural theft and appropriation, to whom would you like to give back the crown?
No one. I think the problem is the crown, doesn’t matter who’s wearing it. Without the crown, without all the fracked-up power dynamics, without those in power profiting from the cultural products of the marginalized while simultaneously vilifying those cultural products and the people that created them, etc., “cultural theft and appropriation” is just humans engaging with the world around them—studying, learning, and collaborating.

How has the very public mainstreaming of bigotry and more visible and documented police violence resonated in your personal life and writing?
Sigh. This is a question to unpack with the therapist I should have but don’t because finding a therapist is hard and navigating my queer, black, womanish, anxious life in this country is harder and something’s gotta give, so that something is often a call to my (thankfully existent) healthcare provider. If I’m being honest (which I guess I said I’m doing full-time these days), in my personal life it has made me less trusting, less empathetic, imaginative, forgiving, less tolerant of uncertainty, more insular, angry and anxious, and generally less functional. For my writing, this translates into making very little poetry. For me, the poem is a space for questioning, exploration, and sitting with the unknown. For me, the poem is not for a space to make arguments or come to definitive answers or full stops. So, at this moment, when what I want is concrete solutions and unequivocal justice, when what I want has little room for ambiguity, the poem and I are a little at odds. I find myself drawn more and more to longer forms—essays, letters, screenplays, podcasts. I have or am trying my hand at all of them these days, both because the bigotry and violence feels expansive and overwhelming as does my response to it, and because these spaces feel better equipped to contain the concrete and unambiguous. But, of course, I don’t actually have the solutions, and unequivocal justice remains outside of my grasp, so I end up with a lot of unfinished work, rage and frustration.

What book would you send to a government leader, domestic or foreign, who censors (or inhibits) marginalized and/or dissenting voices?
I recently spent time with this simulation by Nicky Case on The Evolution of Trust (I just realized I’ve been misidentifying this for a couple weeks as “The Evolution of Distrust,” which probably says something notable about me in this moment in my life and the world), and it’s given me a new lens through which to consider so many of my interactions. I’m talking about it with anyone who’ll listen because it just feels really relevant. It’s not directly relevant to this question (though I’d certainly suggest that said government leader spend some time with the simulation), but in exploring some of Case’s other resources, I also read through his comic on confirmation bias and how we’re built to accept information that fits into our mental model and discard information that doesn’t. So, assuming that I actually had a chance to make an impact on said government leader, I would spend time researching the leader first, learning how they think, and then I’d tailor my pick based on my understanding of them as an individual. Alternate answer, maybe M. NourbeSe Philip’s She Tries Her Tongue, Her Silence Softly Breaks.

Where is the line between observation and surveillance?
I think that line is defined by judgement. Observation requires neutrality; as soon as I have a mind for how the subject of my observation should or should not proceed in its existence, I’ve begun to surveil. Maybe even before that, at the point of expectation. When I begin to ask myself “will they or won’t they?” or any other question that implies an expected direction, when I begin to watch in order to make an unknown known, then I’ve crossed the line into surveillance.

Ife-Chudeni A. Oputa is a Cave Canem, Callaloo, and Lambda Literary fellow. Her poetry and prose have appeared or are forthcoming in Matter, Some Call it Ballin, Gabby, the Los Angeles Review of Books, and elsewhere. Rummage, her debut poetry collection, was selected as the winner of the 2015 Little A poetry contest and publishes this week. She is a native of Fresno, CA.

Born in Zaria, Nigeria, Hafizah Geter serves on the board of VIDA: Women in the Literary Arts, and co-curates the reading series EMPIRE with Ricardo Maldonado. Her poems have appeared or are forthcoming in The New Yorker, Tin House, Narrative Magazine, Gulf Coast, Boston Review, Los Angeles Review of Books, and West Branch, among others.  She is on the poetry committee and book ends committee for the Brooklyn Book Festival and is currently an editor for Little A and Day One from Amazon Publishing.

The PEN Ten with Kelly Forsythe