The PEN Ten with sam sax 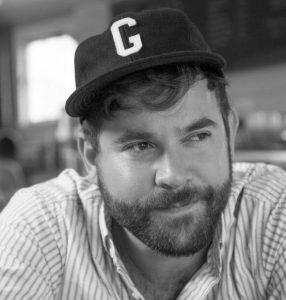 1. When did being a writer begin to inform your sense of identity?
After graduating from college I got into a friend’s car and went on a yearlong poetry tour around the United States. In each new city I had to explain to people what it was exactly I was doing there, to become legible. This made me identify as a writer . . . is one answer. Another is the first time I wrote a verse in high school and delivered a punchline that made a group of boys shout in unison. Another answer is in middle school when I read a poem that changed my life and then had the hubris to believe I could do that too.

2. Whose work would you like to steal without attribution of consequences?
No one. I love hybridity, layering, reappropriation, collage, allusion, and sampling. One of my favorite things about making a poem is how it’s always in conversation with other writers, living and dead. Mostly I’m just excited to be writing in response to the history of literature and hope to be lucky enough that folks will one day want to engage with something I’ve written in a similar way, to use it, challenge it, build on it, and further their own thinking.

4. What’s the most daring thing you’ve ever put into words?
I hope I haven’t written it yet.

5. Where is your favorite place to write?
I try to switch it up as much as possible. You can use the energy of a place up I think. At the moment there’s a coffee shop around the corner where old Italian men shout-talk and their voices provide a kind of backdrop to write against. I’ve also really enjoyed writing in the NYPL Bryant Park location. Holler if you’ve got a pretty space you’d be up for me to come and write in NYC! [email protected]

6. What is the responsibility of the writer?
To write. I don’t want to put any restrictions on what a writer is or should do besides that. I don’t actually have much to say about “the writer” as an identity category or profession. I do have more to say about what a good writer is and ought to do, which I think carries many of the same qualities as a good person. Their responsibility is to respond to the world, to try & shape it into someplace better, more habitable & equitable. To hold up a mirror. To be a mirror. To break the mirror. To complicate the simplicity of the corporatized, advertised, and politicized language of commerce. To put pressure on language. To preach [to the choir & sinners alike]. To offer insight. To make strange what we take as baseline reality. To rage. To give, make, & take pleasure. To insist. To blaspheme. To show another world is possible. To shed light upon that bright false seam.

7. While the notion of the public intellectual has fallen out of fashion, do you believe writers have collective purpose?
Nope.

8. When, if ever, is censorship acceptable?
Well “censorship” never—although often what’s called censorship in current discourse isn’t actually censorship. Everyone ought to be able to say what they want to along with all the consequences & repercussions that come along with it. I’d say the greater danger in this “free speech” debate is when the response to violent art & language is repressed. When punching a Nazi is considered more harmful & punishable than being a Nazi, something’s out of whack. In that instance the moral response is suppressed for some sense of respectability which has shifted so absurdly far right that what is “respectable” has become fascistic. Public/private universities, government agencies, private/public companies, television award shows, and publishing houses shouldn’t be giving virulent hate speech a public platform, and I believe they are morally obliged to interrupt it. Sexist, heterosexist, nativist, classist, racist, xenophobic, transphobic, etc., art can exist and it isn’t censorship to push back against it, to challenge its methods of distribution and hold the institutions accountable who support it.

9. Where is the line between observation and surveillance?
I feel like a whole book could be written on this question & many have been by smarter people than me. To be brief and fail, I’d say—institutional power. To look and record isn’t of itself an act of violence, surveillance always is though. It’s the difference between bearing witness and snitching to the police—are you writing to challenge or reaffirm unjust power? Sometimes one is done accidentally in place of the other, the writer intends to observe but in fact performs surveillance—I think the best we can do is be aware of our social location in every piece of art, interaction, and performance we make.

10. What book would you send to the leader of a government that imprisons writers?
Sympathetic Little Monster—Cameron Awkward-Rich &/or
Diaries of Exile—Yiannis Ritsos

PEN Out Loud: Madness and Mania