The PEN Ten with Lidia Yuknavitch 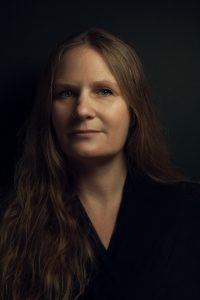 The PEN Ten is PEN America’s weekly interview series. This week, we speak with Lidia Yuknavitch, whose forthcoming novel The Book of Joan will be published by HarperCollins on April 18. In this interview, Yuknavitch discusses the writer’s kinetic role as creator and storyteller, her obsessions and influences, and the often troubled relationship between speech and acts.

Well I think I became conscious of being a writer as a form of identity around the age of 26, not long after the death of my daughter, who died the day she was born. After I emerged from the zombie existence of grief, loss, and psychosis, stories started coming out of my fingers—my body—my heart. The more stories that came out, the more I saw a place to stand rather than drowning in the waters of loss. But now I think it really began much earlier, before I entered the page. I think my identity as a writer may have been born when I was between the ages of 5 and 10. I say that because at those ages I had pica, the uncontrollable urge to eat non-nutritive things. I ate paper and dirt and pennies. I think that was my imagination being born in the face of my father’s abuse, and I think that is the birth of a writer: to imagine yourself from one world into another.

Mary Shelley’s, Marguerite Duras’s, and Kathy Acker’s. No question. In fact, you could say that their work lives in my body and my words. So maybe the theft not only already exists, but unapologetically thrives and mutates.

Well, there is my hair fetish (I have a beautiful and likely to some people creepy collection), painting and painters (which has gotten me into trouble literally and figuratively several times), the close proximity of violence to sexuality and death to life (I collect bones and shed skins and skulls and other dead-ish things—they are quite beautiful to me), and of course, always and forever, water (tears ocean river rain orgasm goo ice snow clouds pregnant with precipitation showers baths lakes puddles faucets amniotic fluid).

The truths of a body. The death of my daughter, abuse from my father, the desire and sexualities I inhabit that do not fit the culturally sanctioned scripts, and the way that violence and war are written on the bodies of women and children in the name of progress.

In my writing room, a world of pure creation—it looks exactly like the inside of my head.

To go down and into experience as deeply as possible and to invent a language for it; to make a bridge to fellow mammals by way of storying our relationship to each other and the planet. To carry the trace of tradition in the act of innovating; to always remember that the brutal and the beautiful rest alongside one another in every moment.

YES. To create a kind of kinetic energy from the act of collaboratively storytelling and making. This motion is older than us and will carry forward after us; energy never dies, it just changes forms. In this way, there is a physics to storytelling. In this way, narrative is quantum.

I’ve been thinking about this a lot lately since we are witnessing the return of rampant and unapologetic violent hate speech (it never really goes away, it just recedes or rises) engendered by the Trump age. How free do we want free speech to be? Is freedom of speech the highest representational aim? I’m not so sure anymore. I mean, on the one hand, I’m against censorship. On the other hand, when we face moments of cultural or social danger, which a person could argue is every single nanosecond of life for a person of color, or an LGBTQ person, for instance, do we really want to champion the free speech of radical racists, misogynists, homophobic, transphobic, xenophobic, assholes? Why? So we can say “I am righteous because I believe in the human right to free speech,” when some of that free speech is violent hateful rhetoric that does indeed have a direct line to acts of violence? Or war? How many bodies have to pile up before we say this speech is pure violence? Six million? More? How many children have to die in wars we’ve made for abstract concepts we hold dear? Concepts “worth dying for?” No children of the wars we wage get a choice about what they’d like to die for. How many black people have to be shot in the street before we admit there is something wrong with the language we use with and on one another?

I am against censorship.

Freedom of expression is worth dying for, worth fighting for.

But I am troubled by the relationship between our words and our deeds. Endlessly.

Yes. For activism, but more explicitly, for breaking so-called laws. However, the laws and codes that my culture has designed for me to live within as a woman are seriously flawed, as they do not account for my corporeal experience in the world. Perhaps the mistakes I’ve made in my life that manifested as breaking rules and laws were actually me trying to invent a language for my experiences … experiences of abuse, pain, disfigurement, being made to feel lesser, or invisible, or weak, or stupid. In this sense: “Women need to become literary criminals, break the literary laws and reinvent their own, because the established laws prevent women from presenting the reality of their lives.” —Kathy Acker

Waiting for the Barbarians by J.M. Coetzee and the screenplay of Hiroshima, Mon Amour by Marguerite Duras.

Lidia Yuknavitch is the author of the novel The Book of Joan (Harper, April 18), which has recently been optioned for film; the national best seller The Small Backs of Children, winner of the 2016 Oregon Book Award’s Ken Kesey Award for Fiction and the Reader’s Choice Award; the novel Dora: A Headcase; three books of short fictions: Her Other Mouths, Liberty’s Excess, and Real To Reel; and a critical book on war and narrative, Allegories Of Violence. Her widely acclaimed memoir The Chronology of Water was a finalist for a PEN Center USA Award for creative nonfiction and winner of a PNBA Award and the Oregon Reader’s Choice Book Award. Her book based on her recent TED Talk, The Misfit’s Manifesto, is forthcoming fall 2017. She founded the workshop series Corporeal Writing in Portland, Oregon, where she also teaches Women’s Studies, Film Studies, writing, and literature. She lives in Oregon with her husband Andy Mingo and their renaissance man son, Miles.

The PEN Ten with Cameron Awkward-Rich