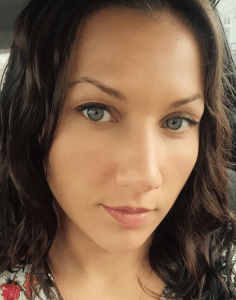 The PEN Ten is PEN America’s weekly interview series. This week, Hafizah Geter, Content Editor and Publicity Coordinator at Poets House, speaks with Melissa Febos, author of the memoir Whip Smart (St. Martin’s Press 2010), and the essay collection Abandon Me (Bloomsbury 2017). They discuss the relationship between writing and identity, the responsibilities of writers, and writers’ relationships to history and social movements.

Hafizah writes: In 2011 I was entering my third year teaching freshman composition at Columbia College Chicago when I stumbled across Melissa Febos’s New York Times op-ed, “Look at me, I’m Crying.” In it, Melissa writes about the peculiarity of privacy in city spaces, about the gaze, and about need and loneliness. Like all writing that moves us, in it, I found recognition. I thought, oh yes, this writer sees me, and was reminded that there is magic in finding the right words at the right time. That semester, and every semester since, I’ve taught “Look at me, I’m Crying” to my freshman class. Why? Because it is a lesson to them that we must look at our lives. A lesson in the importance of personal narratives—which are small, true histories of the world—and a lesson in the absolute necessity of seeing what that world looks like when a woman tells the story. Melissa’s second essay collection, Abandon Me, is out today, February 28th, from Bloomsbury Publishing. Like in all of her writing, Melissa does one of the hardest things a writer can do. She tells her story. But because she wants to tell it true, she’s willing to be both the hero and the enemy. Melissa writes with courage, grace, and an empathy so vast it glitters. She reminds us that the smallest miracle ever created was a single word. You can find Melissa at www.melissafebos.com and @melissafebos and follow her on Spotify because her playlists are dope.

As soon as I learned to read, I read ferociously, obsessively, like someone madly in love. I never wanted to do anything else ever again. My mother used to have to force me outside. You can only be madly in love with something for so long before you start figuring out how to build your life around it.

All the romantic stories about writers seduced me later on, of course. It was a pastime that not only tolerated but insisted that one be strange, melancholy, emotional, a fiend of some kind, oversexual, obsessive, radical, capable of polarities, all of the things that had rendered me an outsider, strange, unfit for the more common aspirations of young girls in America. But before that, before I knew about Plath or Baldwin or Anaïs Nin or Charlotte Perkins Gilman or Alice Walker or Rimbaud or any of the other writers whom I idolized early on, deciding to be a writer transformed my sense of identity. I went from feeling different in most possible ways (not a good thing, to a child) to believing I was going to be the noblest, most magical kind of person: one who created the very things that had transformed my life and become my great love—books.

I want to say that it was this castle built into a bluff on the Sorrento Coast of Italy, in a tiny fishing village where no one spoke English, where I subsisted for a week on espresso and the softest gorgonzola, which I ate with a spoon while finishing the first draft of my second book, stopping intermittently to take a creaky elevator down the bluff to dig my feet into the black sand and dunk my body in the Mediterranean. That place was real! And it’s a great answer, but it isn’t the truest one.

My real answer is airplanes. Nowhere am I more efficient than when trapped 36,000 feet in the air, on stolen time. I will go until the gears stop turning, just feed me tiny cups of terrible coffee and endless mouthfuls of gum. I have a theory that it’s related to how fast I move on the ground. That my feelings and ideas and words are all constantly trying to catch up with me, and being in transit traps me, holds me still. Everything just bubbles up to the surface. I often feel intense surges of love, nostalgia, heartache, and inspiration while traveling long distances. I would write the fuck out of a road trip, too, if driving didn’t preclude it.

In many ways, Abandon Me is a conversation with all of my obsessions and influences: Winnicott and Jung, poets, hickies, the sound of my own name, mythology, the books of my childhood, the sea, my complicated family situation, sex, Labyrinth, the way we replicate our traumas in the people we choose, the parts of us we disown, the way narrative shapes us and is shaped by us, abandonment in all its forms, Billie Holiday, the music of certain words.

I’ve loved music as long and almost as hard as books, and it feels inextricable from my writing and living processes. I still listen to songs the way I did as a kid—like each new obsession is my oxygen, the prayer that will save me. Certainly, it has both accompanied and shaped my understanding of language and sound, and what I strive to do in my own art. I could write a book about my relationship to music. I sort of feel like I already did, in the cumulative mixtapes (yes, actual cassette tapes) that I made before you could just drag and drop songs into an infinitely long playlist. I loved mixtapes the way I love personal essays: you have a finite amount of source material and space, and it’s part alchemy, part puzzle to shape it into the thing you feel inside you.

I’ve written a lot of things that I think appear daring—true enactments of bizarre fetishes, detailed masturbatory accounts, gory drug use, and so forth. But to me, “daring” means requiring bravery, and bravery is action despite fear. By those terms, the most daring thing must be the thing one fears most.

To write! To name the things we won’t or don’t or can’t otherwise.

In many ways, I think our collective purpose is two-part. One, to record the parts of culture and history and humanity that don’t make it into history textbooks, or that people seem bent on forgetting or erasing. That is an enormous category, one that spans all aspects of the writer’s art and intention. It may even include, or necessitate, the second collective purpose: to move people—to action, thought, empathy, perspective, whatever. Writers call in the tides of social movement—be they speechwriters, television writers, advertisement writers, personal essayists, poets, or novelists. We wield a lot of power, even when we don’t recognize it. Sometimes I think we’d rather not recognize it. We can’t afford to indulge that particular laziness anymore.

Muddy Waters, Chuck Berry, and Big Mama Thornton. For starters. Queer Harlem ball voguers. Most of our crowns are worn by thieves.

It has eradicated the luxury of satisfaction in any kind of passive activism from my life and writing. It devastates me, as bigotry and police violence always has. Though I have some hope that those who’ve been able and interested in not seeing what has always been here will be mobilized.

Would they be forced to read it? I wouldn’t waste a good book on someone bound to use it for kindling, or as a shim for the shelf that holds their favorite fascist volumes. If they’d be forced to read it, it would likely be the memoir of a person from their own country who qualifies as a marginalized voice.

Melissa Febos is the author of the memoir, Whip Smart (St. Martin’s Press 2010), and the essay collection, Abandon Me (Bloomsbury 2017). Her work has appeared in The Kenyon Review, Tin House, Granta, Prairie Schooner, Glamour, Salon, New York Times, Guernica, Dissent, Poets & Writers, Lenny Letter, Goodbye to All That: Writers on Loving and Leaving New York, and her essays have won prizes from Prairie Schooner, Story Quarterly, and The Center for Women Writers. She is a three-time MacDowell Colony fellow, and has also received fellowships from the Bread Loaf Writer’s Conference, Virginia Center for Creative Arts, Vermont Studio Center, The Barbara Deming Memorial Fund, Ragdale, and Lower Manhattan Cultural Council. The recipient of an MFA from Sarah Lawrence College, she is currently Assistant Professor of Creative Writing at Monmouth University, MFA faculty at the Institute of American Indian Arts (IAIA), and serves on the Board of Directors for VIDA: Women in Literary Arts. She grew up on Cape Cod and lives in Brooklyn.

Hafizah Geter is Nigerian immigrant. A Cave Canem Fellow, her poems have appeared in Narrative Magazine, Gulf Coast, Boston Review, Los Angeles Review of Books, and The New Yorker, among others. She is on the board of VIDA: Women in the Literary Arts, on the Poetry Committee & Bookends Committee for the Brooklyn Book Festival, and is a poetry editor at Phantom Books where she also co-curates its reading series EMPIRE with Ricardo Maldonado. She is currently the Content Editor & Publicity Coordinator for Poets House. Hafizah will be interviewing feminists and champions of intersectional equity.

The PEN Ten with Olivia Cole