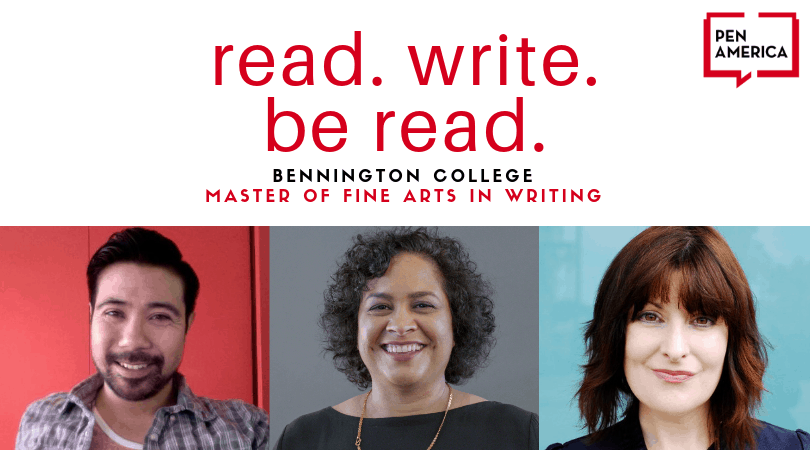 The PEN Ten is PEN America’s weekly interview series. This week we are celebrating the announcement of 2018 EV Natalie Mislang Mann’s acceptance to Bennington by speaking with two of the 2017 scholarship recipients, 2008 EV Davin Malasarn and 2010 EV Monica Carter.

1. How does your identity shape your writing? Is there such a thing as “the writer’s identity?”
Someday, I’d like to convincingly portray a character who is free of my identity. I’m not there yet. Everything I write currently is shaped by who I am. I once drafted a novel about six people installed into a machine that kept them alive indefinitely. I eventually realized that all six people were different sides of me.
—Davin Malasarn, EV 2008

2. In an era of “alternative facts” and “fake news,” how does your writing navigate truth? And what is the relationship between truth and fiction?
I want my writing to always contain as much truth and authenticity as possible. Politicians and fiction writers are similar in that they both manipulate reality. The difference is, a politician is lying about reality with consequences that affect the rights and lives of others, and the fiction writer is creating a reality for a reader to enjoy as an escape, a mirror of society, or place to look for guidance.
—Monica Carter, EV 2010

3. Writers are often influenced by the words of others, building up from the foundations others have laid. Where is the line between inspiration and appropriation?
It would be impossible for me to name all the writers that have inspired me because one of the facets of reading that I love is seeing an experience other than my own. How sublime it is to read something a writer has created and have it alter your perspective of the world. It’s like being given a gift that renews itself every day. When experiencing that inspiration, it commands a certain reverence for the work and the writer. To achieve that as a writer means you respect the words on the page and what they represent. Appropriation means exploiting the experience of others which is the opposite of respect.
—Monica Carter, EV 2010

“My search for meaning in art often arrives at a basic form of resistance, the resistance against self-suppression. “

4. “Resistance” is a long-employed term that has come to mean anything from resisting tyranny, to resisting societal norms, to resisting negative urges and bad habits, and so much more. It there anything you are resisting right now? Is your writing involved in that act of resistance?
My search for meaning in art often arrives at a basic form of resistance, the resistance against self-suppression. I wrestle with insecurities about whether or not my story is valuable to anyone. But I believe we never know the impact of the art we put out into the world. I try to understand myself and my emotions clearly and communicate that on the page in the hope that someone else finds value in it.
—Davin Malasarn, EV 2008

5. What do you consider to be the biggest threat to free expression today? Have there been times when your right to free expression has been challenged?
The culture of judgment and popular opinion, power, and legal eradication of individual’s rights. Once it becomes acceptable to judge others and condemn them publicly, we have a society of divisiveness that moves away from acceptance and understanding. Combining political power and the power of social media are the conduits that disseminate these judgments. Top that off with laws that support discrimination against individuals based on gender identity, sexual identity, race, religion, age, and/or disability and we are operating in a dictatorship. Free expression can’t exist in a dictatorship. My writing hasn’t been challenged, but I know writers whose work has been challenged because it was “too queer” or because the work reflected too many minorities, like being Latinx and queer. I do feel myself becoming more vigilant when I go out into the world. Indicating to others in the public sphere that I am queer feels dangerous, and that danger is tenfold if you’re a trans woman of color. I can’t help but reflect that in my writing.
—Monica Carter, EV 2010

6. What’s the most daring thing you’ve ever put into words?
Samantha Dunn once led a writing exercise where she had us write something that we knew we were going to tear up. I wrote my most daring thing then. Afterwards, she brought a trash can around and let us throw the torn-up pieces of paper away. I was so afraid of anyone reading it that I wouldn’t even put it in the trash. I carried the bits in my backpack for weeks. I think I eventually tore them up into even smaller pieces and threw them away in multiple trash cans on multiple days.
—Davin Malasarn, EV 2008

7. Have you ever written something you wish you could take back? What was your course of action?
I’ve accepted that I’ll probably want to take back a lot of what I’ve published. I think that happens as we improve. But I just leave it alone. I think the world self-sorts bad writing and makes it invisible without my help.
—Davin Malasarn, EV 2008

8. Post, stalk, or shun: What is your relationship to social media as a writer?
I mainly use social media to let people know that I have the best dog in the world.
—Davin Malasarn, EV 2008 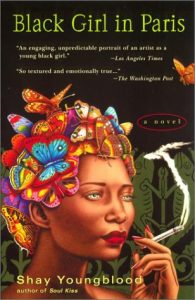 9. Can you tell us about a piece of writing that has influenced you?
All the works of Toni Morrison, Evelyn Waugh, Graham Greene, Dawn Powell, Albert Halper, F. Scott Fitzgerald, Julien Gracq, Irmgard Keun, Langston Hughes, Jean Rhys, Saul Bellow, Tove Jansson, Pat Barker, Zola, Sarah Waters, Jane Bowles, Dos Passos, Dubravka Ugrešić. I can’t possibly name all the writers that I read and admire. Also, I can’t narrow it down to one. Black Girl in Paris by Shay Youngblood is a book I wish more folks would read because it’s gorgeous. I also reread The Price of Salt every so often. These are mainly my fiction quick hits.
—Monica Carter, EV 2010

10. How did being an Emerging Voices Fellow impact your career as a writer?
It’s been invaluable. It opened up my small world through reading, community, guidance, and support. I was lucky enough to be chosen as an Emerging Voice and as a participant in the MARK program (which no longer exists), which exponentially changed my work for the better. I have so many friendships and connections that began when I was a fellow that exist in my life today. Not only did it change my writing and my life in Los Angeles, but when I moved to New York it continued to change my life. I never graduated from college, and my dream was to one day get a degree. With a scholarship from PEN America and Bennington College, I am happy to say I will be receiving my MFA (if all goes well) in January of 2020. The program has helped me get published, given me wonderful experiences reading my work in public, and supported me at every stage of my career. Also, it inspired me to pursue my career as a nonprofit advocate for queer writers and their works. Most importantly, it allows me to belong to a community of diverse and talented writers. I’m forever grateful to the organization.
—Monica Carter, EV 2010

The PEN Ten: Jevon Jackson on Uncompromising Truth and What Makes for Good Narrative

“Be Versatile and Stay Curious”: A PEN Ten Interview with Zahra Hankir