The PEN Ten with the 2019 Emerging Voices 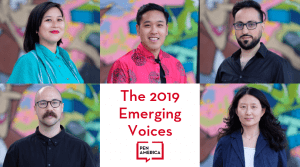 1. How does your identity shape your writing? Is there such a thing as “the writer’s identity?”
My identity is all over the place, but I’m also all over the place and it shows in my writing. I grew up Korean, Texan, new-wave, country, conservative, liberal, sticky-sweet, and bitchy. I’ve been well-to-do and I’ve lived off beans for a year. The word identity scares the shit out of me because it makes me think I’m supposed to be one thing, or one-ish thing. I can’t do that. And some days I write like I grew up in Texas and some days I write like I’m a New Yorker. Some days I write about being Korean and some days I write about sex which is something Koreans can’t stand reading about. Sometimes I sound like a scared Korean woman and sometimes I sound like a white boy who went to prep school on the east coast. I guess the one consistent thing I can say is that, no matter what part of me is harnessed in to the writing of that moment, I try to be as honest as possible. I don’t try to make it pretty and I don’t try to make it easy.

2. In an era of “alternative facts” and “fake news,” how does your writing navigate truth? And what is the relationship between truth and fiction?
The only writing worth anything is telling the truth. This is the case even in the most extreme, outlandish fiction. The reason that we connect with the written word and literature is because it is touching some vein of the truth: truth about our lives, our existence, our relationships with each other. The weird thing about it is that you don’t have rules for telling the truth, and that is what makes it so hard to quantify or qualify. What is the truth in an emotion? If two characters fall in love, how do you exactly show that in a truthful way? The only thing the reader can do to discern that is to read the work and decide for themselves. I think in our society, where a lot of things are passed off as the truth, it is even more important to write what you believe is true and keep writing until you get there.

3. Writers are often influenced by the words of others, building up from the foundations others have laid. Where is the line between inspiration and appropriation?
Appropriation is linked to colonialism and is rooted in capitalism. It’s about taking from another person or culture, without credit, for self-gain. A cultural framework that thrives on meritocracy and monetization fosters this issue of appropriation and plagiarism. When I’m inspired by a writer, I want to start a conversation with them in my writing. I want to honor them by showing how their ideas continue to grow and reverberate past the printing of their words. And I credit them! When I’m writing about an experience that isn’t mine, I must ask myself about the stakes and the purpose for why I do so. Is it about showing others how “diverse and inclusive” I can be, or is it about writing for a collective liberation? Most importantly, I must make sure that the people I am writing about are included in my process. And I will credit them, too!

4. “Resistance” is a long-employed term that has come to mean anything from resisting tyranny to resisting societal norms to resisting negative urges and bad habits, and so much more. It there anything you are resisting right now? Is your writing involved in that act of resistance?
I resist many things on a daily basis, from gravity to the urge to blow my nose in public. It’s hard for me to imagine any writing that is not involved in an act of resistance. If I were to generalize, I think my writing resists the urge to view the world homogeneously. The goal is to provide a new perspective that makes readers question their facts, values, or opinions.

The weight of tyranny and other large-scale conditions make it difficult to categorize less direct acts as resistance. I would like to think that even writing or reading a slice-of-ordinary-life story is an act of resistance against tyranny because it helps us find our humanity. I think humanity is the enemy of tyranny, societal norms, and most other things imposed on us.

5. What do you consider to be the biggest threat to free expression today? Have there been times when your right to free expression has been challenged?
I would say the biggest threat to free expression starts at home. As adult writers, how much are we looking to divorce ourselves from the forces that taught us to squelch our own? There were times when my free expression was challenged early on and I have to do the hard work of dismantling those old ideas if I am to move forward. To speak about resistance, why aren’t I writing what the work has chosen me to write? As adults we can be so hardened, and that hardening of our creative souls happens so subtly, that when we are paralyzed at our desks or in front of the screen without knowing why, it takes work to unlearn and undo historical traumas that threaten our free expression. I can really be seduced by my inner saboteur. And it makes sense because if we zoom out from interior to global, we have an administration in this country that uses oppression of journalism, oral histories, and art as a main platform to drive rhetoric that says anything that deviates from the narrow belief system needs to be suppressed and silenced. Society is mirroring what we think about ourselves. But I have to choose every day to keep putting pen to paper.

7. Have you ever written something you wish you could take back? What was your course of action?
Yes. I’m a byproduct of my upbringing, education, and surroundings, which have not been perfect. My course of action has been to listen when I’ve been called out, take time to reflect, self-educate, and understand the impact of my actions. I don’t mean that I learn how not to say a problematic thing. I want to get to the root of why it’s a problem, understand how I came to think that way, and devise a course of action to undo my thinking. I’m starting to learn about community accountability and harm reduction—a process that will take the rest of my life. The work of Mia Mingus, as well as Layla F. Saad’s Me and White Supremacy Workbook have been vital.

8. Post, stalk, or shun: What is your relationship to social media as a writer?
I think that social media can serve writers in a few ways. Social media allows us to share events, readings, and news. It’s a way to cast a wide net and let everyone see what’s going on with us, and sometimes we need coaxing to admit we are writers and what we are doing is worthy. As a friend once told me, “People are looking for you and your work. To hide would be a real disservice to the hard work you are doing and what you are creating.”

Where social media can be unhealthy is when we use it instead of doing the work. I have a post-it on my laptop that reads: IF YOU SURF THE WEB, YOUR DREAMS WILL NOT COME TRUE. Social media seduces us to compare and despair. The Algorithm, with a capital A, can be a gatekeeper. Social media sites like Twitter can make you feel lost in content. There’s this illusion that there are only 20 writers who are hot right now and they get to have it and you don’t. And if you don’t play the social media game you won’t get to either. I think it’s about doing what’s comfortable for you and really carving out space so that you can be protective of your work.

9. Can you tell us about a piece of writing that has influenced you?
Most recently, a creative nonfiction piece titled “Scenes of Exile” published in the Bare Life Review resonated with me so much that I think about it daily. In this piece, a Chilean author writes about his friends who escaped to the United States. He describes normal scenes of get-togethers. What is striking is the avoidance of topics such as prison and political activism. Later in the piece, a few of them are assassinated. In the last scene the narrator takes out a diabetes test and passes it along to see who the true victims are . . . of the sweet sugar.

I relate to this piece in more than one way. When you speak with Syrians these days, no one talks about those who have recently died horrible deaths. And those who have suffered through political activism in the seventies and eighties and nineties are now dying of diabetes and other diseases.

10. How did being an Emerging Voices Fellow impact your career as a writer?
PEN America has created a direct path to a lot of things—everything except for the actual writing itself. I had never published anything before and had never been a part of a group that prioritized writing over all else. I’m still in the writing process, but if I do acquire an agent, or sell a book, or get published, it will be a direct result of being an EV Fellow. I feel as though I have a much stronger command of what it means to be a writer. This path no longer feels abstract.

“I Started to Write the Way I Needed To”: An Essay by 2019 Emerging Voices Fellow T.K. Lê