The PEN/Jacqueline Bograd Weld Award for Biography is awarded for excellence in the art of biography. This prize of $5,000 goes to the author of a distinguished work published in the United States during the previous calendar year. The winning title is considered by the judges to be a work of exceptional literary, narrative, and artistic merit, based on scrupulous research.

All winners, finalists, and longlisters for this award are eligible to receive PEN America’s official emblems. If you are a publisher and interested in obtaining PEN America’s award emblem, please write to [email protected]. For more information, please visit our FAQ page.

All the Frequent Troubles of Our Days: The True Story of the American Woman at the Heart of the German Resistance to Hitler, Rebecca Donner (Little Brown and Company)

From the judges’ citation: “All the Frequent Troubles of Our Days by Rebecca Donner is not just an exemplary biography but also a propulsive, page-turning spy thriller and a rigorous, groundbreaking new history of German resistance networks during World War II. At the book’s heart is Mildred Harnack, a Wisconsin-born academic who in 1932 became the leader of a secret, Berlin-based anti-fascist group called ‘The Circle.’ Harnack spent the next decade navigating a dark, paranoid, Le Carré-ian world of dead drops, coded messages, and smuggled radios, all while struggling to stay a step ahead of the Gestapo. Donner is Harnack’s great-great-niece, but she doesn’t dwell on this connection, keeping the narrative rooted firmly in its historical context and centered on the life of this remarkable woman. With vivid, lyrical writing built on a foundation of extraordinarily deep research, Donner provides an intimate view of Harnack’s transformation from a restless and somewhat aimless graduate student into an enemy of the Nazi regime so potent that she earned the personal animus of Adolf Hitler. Early on, when describing Harnack’s destruction of a potentially incriminating journal, Donner writes, “Her goal was self-erasure. The more invisible she was, the better her chances for survival.” Now, with this mesmerizing, unforgettable book, Donner has undone that erasure, and ensured that the astonishing story of a great and complicated hero will survive for years to come.” 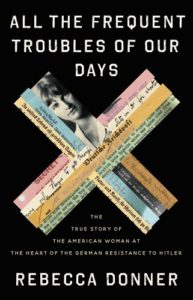 All the Frequent Troubles of Our Days: The True Story of the American Woman at the Heart of the German Resistance to Hitler, Rebecca Donner (Little Brown and Company)
Bookshop

2021 Amy Stanley for Stranger in the Shogun’s City: A Japanese Woman and Her World (Scribner)

2020 Jacquelyn Dowd Hall for Sisters and Rebels: A Struggle for the Soul of America (W. W. Norton & Company)

2018 John A. Farrell for Richard Nixon: The Life (Doubleday)

2014 Linda Leavell for Holding On Upside Down: The Life and Work of Marianne Moore (Farrar, Straus & Giroux)

2011 Stacy Schiff for Cleopatra: A Life (Little, Brown and Company)

2009 Richard Brody, Everything is Cinema (Picador)