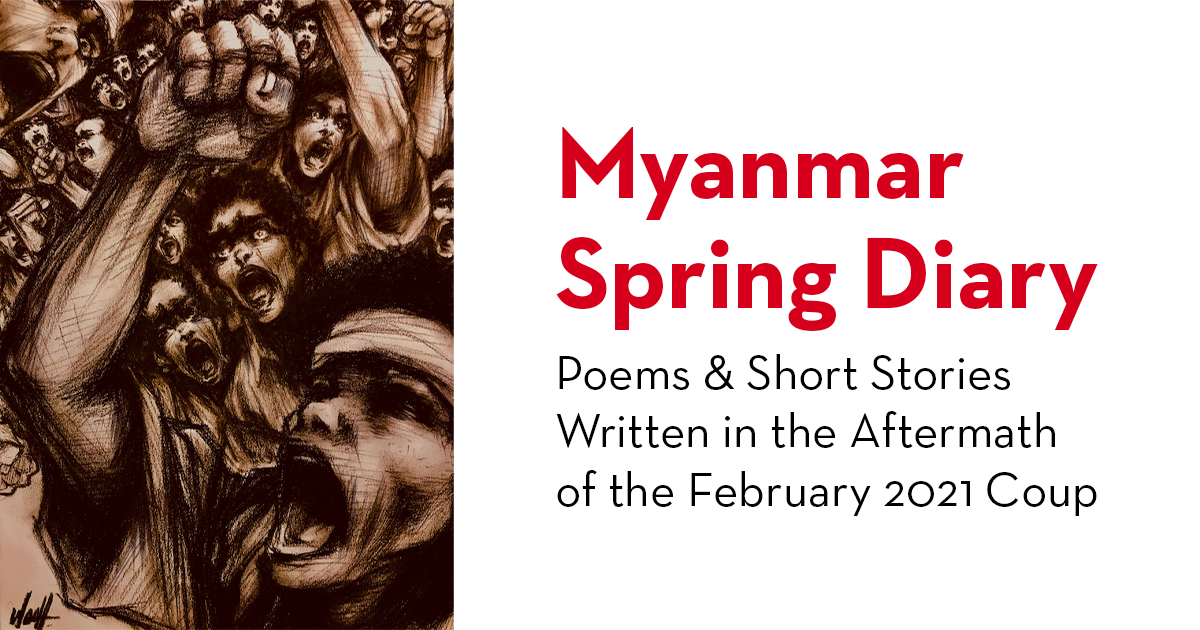 On February 1, 2021, Myanmar’s military launched a violent coup, preventing the democratically-elected government from starting a second term and returning the country to yet another period of repressive military rule after a decade of relative openness. According to the PEN America report Stolen Freedoms: Creative Expression, Historic Resistance, and the Myanmar Coup, published in December 2021, “Creative artists, including writers, poets, filmmakers, painters, musicians, satirists, graphic artists, and others, have been among the vanguard of the public response to the coup, using their creative tools to denounce the coup, to defend the freedoms gained during the country’s 10-year political opening, and to call for greater change. They have built upon decades of creative protest in Myanmar, from the popular and outspoken pro-independence songs of the 1930s, to the elusive but subversive poetry of the 1970s and 1988, to the mocking satire of the early 2000s.”

At the time of publication, PEN America had identified dozens of creative artists who had been detained since the coup started, with many more being hunted and targeted for arrest, or forced to flee into hiding or exile. At least five had been brutally killed and many more subjected to abuse and torture. The third wave of COVID-19, exacerbated by the coup, had further devastated the creative sector, with the deaths of many poets, writers, artists, musicians, and actors, especially from the older generations.

The authors of Myanmar Spring Diary, a poignant collection of 10 short stories and 12 poems, reflect on the countless acts of courage and tragic losses in the wake of the 2021 military coup, and pay tribute to the Spring Revolution heroes. Their stories and poems are set against the backdrop of Myanmar’s 10 year experiment with quasi-democracy, as well as the previous five decades of military rule. The poems were written in Myanmar’s languages and have been translated into English for the first time. 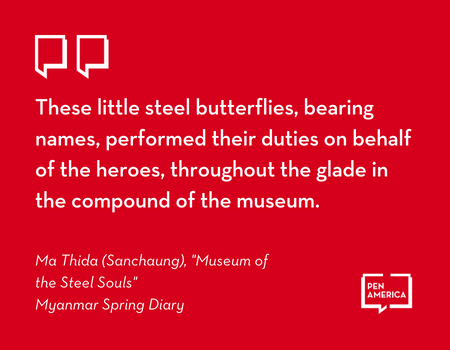 Museum of the Steel Souls

A smoke bomb must have exploded in here. Its strong smell and thick smoke almost choked me. I couldn’t see anything inside the room clearly. The dark columns of smoke curled up to the ceiling, and then back down to the floor. I could only make out objects up to three feet away.

My goodness! As I peered through the dark clouds of smoke, squinting my eyes so I could see what lay ahead, I tripped over something on the floor. I fell, but the object didn’t move. I looked down quickly. My eyes stung.

Oh, there you are! A woman’s white slipper soaked in blood. Quite a light slipper, but sticky blood had dried under its sole. So, though I tripped over it, the slipper was as firm as a hammered nail. The Myanmar basic education women teachers I know usually wear this type of slipper. It symbolized, therefore, a teacher joining the Spring Revolution till she breathed her last breath. I turned around, looking down at the bloody slipper, stood upright, and bowed to the owner, who I imagined was a school teacher in a green and white school uniform. My eyes no longer stung, but the smell of smoke had not dissipated. Maybe my nostrils had gotten used to the smell. 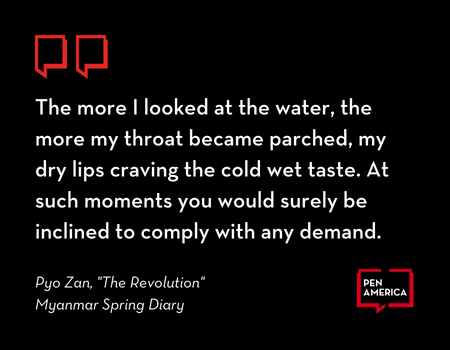 Now they’ve got me. I knew I should shrug with resignation, and avoid any act or speech that would disturb them.

They came to my house in the evening. My neighbors didn’t think of me as a hero, but I followed them like a lamb. When I stepped into their car, two policewomen didn’t simply blindfold me, they also gave me a slap.

I am a native of this town, so I could imagine where we were heading, but I no longer cared to make mental notes. I knew the car was driving round and round, and I heard the movements of the security forces preparing for the car to enter a compound.

Then the car stopped in front of a building in the compound. Footsteps. Then I was dragged out of the car. I was pushed into a room, brutal hands pulling my long hair that hung down to my waist. Then the door was shut.

Then I heard the hard footsteps of boots. What I didn’t know at all was what they wanted me to say. They asked questions, not in the usual manner of a discussion, but in the manner of being forced to admit what I didn’t do. This was the usual interrogation practice. 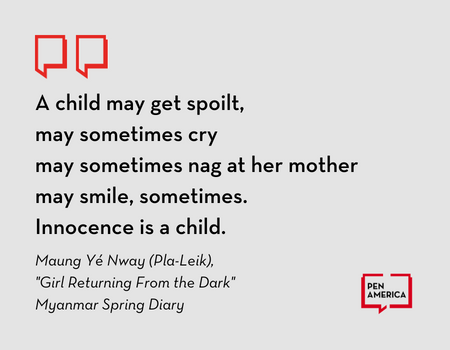 Girl Returning From the Dark

Su Htet Wai is her name.

But she prefers to be called,

with her father’s name as her surname.

She loves her father,

She loves her mother,

She loves her brothers and sisters,

She also loves her father’s friends. 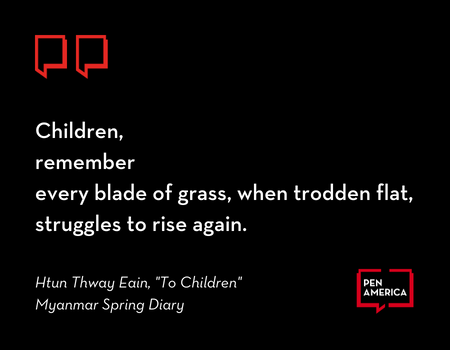 The time has yet to come

when the national flag should fly

When you have passed

the subjects you are taught,

“This is the bomb,

this is the bullet,

this is the dictator,”

then you may all go back to your classes. 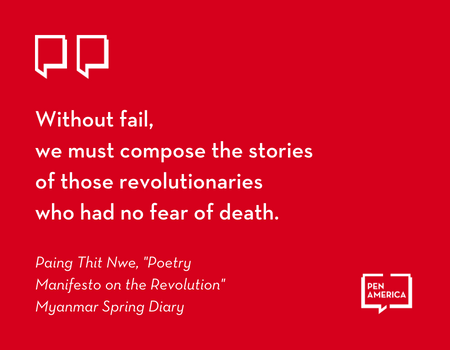 Poetry Manifesto on the Revolution

the lines exploited for the sake of their military power.

The subject of our poetry

Must be: how we had to steal

PEN America would like to thank the courageous writers and poets who contributed their work to this inspiring collection, and to also pay tribute to all of Myanmar’s writers, poets, and other creative artists. Zaw Tun, an award-winning poet and translator who has published his own book of poetry and translated more than 50 books of Myanmar poetry and two novels into English, translated the Burmese-language poems and short stories in this collection. Dr. Karin Deutsch Karlekar, PEN America’s director of Free Expression at Risk Programs, and PEN America consultant Jane Madlyn McElhone provided editorial oversight and guidance for the project, along with Myanmar-based partners who wish to remain anonymous.