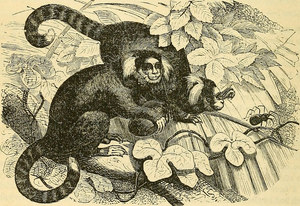 This week in the Guernica/PEN Flash series, we feature a piece by Clarice Lispector. Subscribe to the series and get new flash delivered to your inbox twice a month—no spam or news, just stories.

That first time we had a marmoset in the house was around New Year’s. We had no running water and no maid, people were lining up to buy meat, the summer heat had exploded—and that was when, silent with bewilderment, I saw the present come into the house, already eating a banana, already examining everything with great speed and a long tail. He seemed more like a big monkey not yet fully grown, he had tremendous potential. He’d climb the laundry hanging on the clothes line, from where he’d holler like a sailor, and toss banana peels wherever they fell. And I was exhausted. Whenever I’d forget and wander absentmindedly into the laundry room, the big shock: that cheerful man was there. My youngest son knew, before I did, that I would get rid of that gorilla: “And what if I promise that one day the monkey’s going to get sick and die, will you let him stay? and what if you knew that sooner or later he’ll fall out the window anyway and die down there?” My feelings made me avert my gaze. The little-big monkey’s happy and filthy lack of awareness made me responsible for his destiny, since he himself wouldn’t take the blame. A girlfriend understood of what bitterness my acquiescence was made, what crimes fed into my dreamy manner, and crudely saved me: some boys from the favela showed up in a happy commotion, took away the laughing man, and for the lackluster New Year I at least got a monkey-free house.

A year later, I’d just been feeling a surge of joy, when right there in Copacabana I spotted the crowd. A man was selling little monkeys. I thought of the boys, of the joys they gave me for free, unrelated to the worries they also gave me for free, I imagined a circle of joy: “Whoever gets this must pass it on,” and on and on, like a chain reaction running up a trail of gunpowder. And right on the spot I bought the one whose name would be Lisette.

She nearly fit in my hand. She was wearing the skirt, earrings, necklace and bracelet of a Bahian woman. And she had the air of an immigrant who lands still dressed in her country’s traditional clothing. There was also an immigrant quality in her wide eyes.

As for this one, she was a miniature woman. She spent three days with us. She was so delicately built. And so incredibly sweet. More than just her eyes, her gaze was wide. At every movement, her earrings would tremble; her skirt was always neat, her red necklace shiny. She slept a lot, but was sober and tired when it came to eating. Her rare caresses were just light bites that left no mark.

On the third day we were in the laundry room admiring Lisette and the way she was ours. “A little too gentle,” I thought, missing my gorilla. And suddenly my heart replied very sternly: “But that’s not sweetness. It’s death.” The harshness of the message left me speechless. Then I told the boys: “Lisette is dying.” Looking at her, I then realized how far our love had gone. I rolled up Lisette in a napkin, went with the boys to the nearest emergency room, where the doctor couldn’t see us because he was performing an urgent procedure on a dog. Another taxi—Lisette thinks we’re on an outing, Mama—another hospital. There they gave her oxygen.

And with that breath of life, a Lisette we didn’t know was suddenly revealed. Her eyes were much less wide, more secretive, more laughing, and her protruding and ordinary face had a certain ironic superiority; a little more oxygen, and she felt like saying that she could hardly stand being a monkey; she was indeed, and had a lot to say. Soon, however, she succumbed once more, exhausted. More oxygen and this time a serum injection to whose prick she reacted with an angry little swipe, her bracelet tinkling. The nurse smiled: “Lisette, dear, calm down!”

The diagnosis: she wasn’t going to make it, unless she had oxygen nearby and, even then, it was unlikely. “Don’t buy monkeys on the street,” he scolded me shaking his head, “sometimes they’re already sick.” No, you had to buy a good monkey, to know where it came from, for at least five years of guaranteed love, you had to know what it had or hadn’t done, as if you were getting married. I talked it over with the boys for a moment. Then I said to the nurse: “Sir, you’ve taken quite a liking to Lisette. So if you let her spend a couple days near the oxygen, and she gets better, she’s yours.” But he thought about it. “Lisette is pretty!” I implored. “She’s beautiful,” he agreed, thoughtful. Then he sighed and said: “If I cure Lisette, she’s yours.” We left, with an empty napkin.

The next day they called, and I told the boys that Lisette had died. My youngest asked me: “Do you think she died wearing her earrings?” I said yes. A week later my eldest said to me: “You look so much like Lisette!” “I like you too,” I replied.

Clarice Lispector was born in 1920 to a Jewish family in western Ukraine. As a result of the anti-Semitic violence they endured, the family fled to Brazil in 1922, and Clarice Lispector grew up in Recife. Following the death of her mother when Clarice was nine, she moved to Rio de Janeiro with her father and two sisters, and she went on to study law. With her husband, who worked for the foreign service, she lived in Italy, Switzerland, England, and the United States, until they separated and she returned to Rio in 1959; she died there in 1977. Since her death, Clarice Lispector has earned universal recognition as Brazil’s greatest modern writer.

Katrina Dodson‘s work has appeared in Granta, McSweeney’s, and Two Lines. She is a PhD candidate in Comparative Literature at the University of California, Berkeley. Dodson’s translation of The Complete Stories by Clarice Lispector will be published in August by New Directions.

4 books are going back on shelves in Beaufort, SC, incl by @MargaretAtwood @halseanderson @StephenChbosky. But it's preposterous that 99 books were put into storage just b/c 1 parent put them on a list & made a demand. 95 more to review, still banished... https://www.islandpacket.com/news/local/education/article269483917.html

"This morning in Kyiv, writers Peter Godwin, Barbara Demick and Dave Eggers joined PEN America and @PenUkraine to release a report that reveals the extent of Putin’s assault," reports @RonCharles: