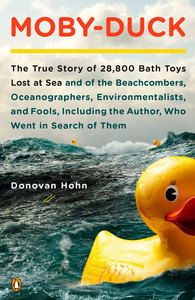 At the outset, I felt no need to acquaint myself with the six degrees of freedom. I’d never heard of the Great North Pacific Garbage Patch. I liked my job and loved my wife and was inclined to agree with Emerson that travel is a fool’s paradise. I just wanted to learn what had really happened, where the toys had drifted and why. I loved the part about containers falling off a ship, the part about the oceanographers tracking the castaways with the help of far-flung beachcombers. I especially loved the part about the rubber duckies crossing the Arctic, going cheerfully where explorers had gone boldly and disastrously before.

At the outset, I had no intention of doing what I eventually did: quit my job, kiss my wife farewell, and ramble about the Northern Hemisphere aboard all manner of watercraft. I certainly never expected to join the crew of a fifty-one-foot catamaran captained by a charismatic environmentalist, the Ahab of plastic hunters, who had the charming habit of exterminating the fruit flies clouding around his stash of organic fruit by hoovering them out of the air with a vacuum cleaner.

Certainly I never expected to transit the Northwest Passage aboard a Canadian icebreaker in the company of scientists investigating the Arctic’s changing climate and polar bears lunching on seals. Or to cross the Graveyard of the Pacific on a container ship at the height of the winter storm season. Or to ride a high-speed ferry through the smoggy, industrial backwaters of China’s Pearl River Delta, where, inside the Po Sing plastic factory, I would witness yellow pellets of polyethylene resin transmogrify into icons of childhood.

I’d never given the plight of the Laysan albatross a moment’s thought. Having never taken organic chemistry, I didn’t know and therefore didn’t care that pelagic plastic has the peculiar propensity to adsorb hydrophobic, lipophilic, polysyllabic toxins such as dichlorodiphenyltrichloroethane (a.k.a. DDT) and polychlorinated biphenyls (a.k.a. PCBs). Nor did I know or care that such toxins are surprisingly abundant at the ocean’s surface, or that they bioaccumulate as they move up the food chain. Honestly, I didn’t know what “pelagic” or “adsorb” meant, and if asked to use “lipophilic” and “hydrophobic” in a sentence I’d have applied them to someone with a weight problem and a debilitating fear of drowning.

If asked to define the “six degrees of freedom,” I would have assumed they had something to do with existential philosophy or constitutional law. Now, years later, I know: the six degrees of freedom—delicious phrase!—are what naval architects call the six different motions floating vessels make. Now, not only can I name and define them, I’ve experienced them firsthand. One night, sleep-deprived and nearly broken, in thirty-five-knot winds and twelve-foot seas, I would overindulge all six—rolling, pitching, yawing, heaving, swaying, and surging like a drunken libertine—and, after buckling myself into an emergency harness and helping to lower the mainsail, I would sway and surge and pitch as if drunkenly into the head, where, heaving, I would liberate my dinner into a bucket.

At the outset, I figured I’d interview a few oceanographers, talk to a few beachcombers, read up on ocean currents and Arctic geography, and then write an account of the incredible journey of the bath toys lost at sea, an account more detailed and whimsical than the tantalizingly brief summaries that had previously appeared in news stories. And all this I would do, I hoped, without leaving my desk, so that I could be sure to be present at the birth of my first child.

But questions, I’ve learned since, can be like ocean currents. Wade in a little too far and they can carry you away. Follow one line of inquiry and it will lead you to another, and another. Spot a yellow duck dropped atop the seaweed at the tide line, ask yourself where it came from, and the next thing you know you’re way out at sea, no land in sight, dog-paddling around in mysteries four miles deep. You’re wondering when and why yellow ducks became icons of childhood. You want to know what it’s like inside the toy factories of Guangdong. You’re marveling at the scale of humanity’s impact on this terraqueous globe and at the oceanic magnitude of your own ignorance. You’re giving the plight of the Laysan albatross many moments of thought.

The next thing you know, it’s the middle of the night and you’re on the outer decks of a post-Panamax freighter due south of the Aleutian island where, in 1741, shipwrecked, Vitus Bering perished from scurvy and hunger. The winds are gale force. The water is deep and black, and so is the sky. It’s snowing. The decks are slick. Your ears ache, your fingers are numb. Solitary, nocturnal circumambulations of the outer decks by supernumerary passengers are strictly forbidden, for good reason. Fall overboard and no one would miss you. You’d inhale the ocean and go down, alone. Nevertheless, there you are, not a goner yet, gazing up at the shipping containers stacked six-high overhead, and from them cataracts of snowmelt and rain are spattering on your head. There you are, listening to the stacked containers strain against their lashings, creaking and groaning and cataracting with every roll, and with every roll you are wondering what in the name of Neptune it would take to make stacks of steel—or for that matter aluminum—containers fall. Or you’re learning how to tie a bowline knot and say thank you in both Inuktitut and Cantonese.

Or you’re spending three days and nights in a shabby hotel room in Pusan, South Korea, waiting for your ship to come in, and you’re wondering what you could possibly have been thinking when you embarked on this harebrained journey, this wild duckie chase, and you’re drinking Scotch, and looking sentimentally at photos of your wife and son on your laptop, your wife and son who, on the other side of the planet, on the far side of the international date line, are doing and feeling and drinking God knows what. Probably not Scotch. And you’re remembering the scene near the end of Moby-Dick when Starbuck, family man, first officer of the Pequod, tries in vain to convince mad Ahab to abandon his doomed hunt. “Away with me!” Starbuck pleads, “let us fly these deadly waters! let us home!”

And you’re dreaming nostalgically of your former life of chalkboards and Emily Dickinson and parent-teacher conferences, and wishing you could go back to it, wishing you’d never contacted the heavyset Dr. E., or learned of the Great Pacific Garbage Patch, or met the Ahab of plastic hunters, or the heartsick conservationist or the foulmouthed beachcomber or the blind oceanographer, any of them. You’re wishing you’d never given Big Poppa the chance to write about Luck Duck, because if you hadn’t you’d never have heard the fable of the rubber ducks lost at sea. You’d still be teaching Moby-Dick to American teenagers. But that’s the thing about strong currents: there’s no swimming against them.

The next thing you know years have passed, and you’re still adrift, still waiting to see where the questions take you. At least that’s what happens if you’re a nearsighted, school-teaching, would-be archaeologist of the ordinary, with an indulgent, long-suffering wife and a juvenile imagination, and you receive in the mail a manila envelope, and inside this envelope you find a dozen back issues of a cheaply produced newsletter, and in one of those newsletters you discover a wonderful map—if, in other words, you’re me.

From Moby-Duck: The True Story of 28,800 Bath Toys Lost at Sea and of the Beachcombers, Oceanographers, Environmentalists, and Fools, Including the Author, Who Went In Search of Them by Donovan Hohn. Reprinted by arrangement with Penguin Books, a member of Penguin Group (USA) LLC, A Penguin Random House Company. Copyright (c) Donovan Hohn, 2012.