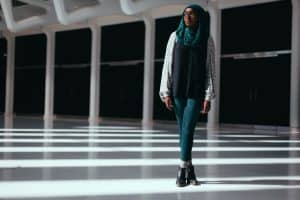 Today, we share Bayan Abubakr’s story on being a Muslim in America. The piece is Abubakr’s response to The M Word’s questionnaire.

Yes! Only identified as a Muslim with a hijab. Being black doesn’t necessarily lead to most identifying me as a Muslim. In most people’s understandings of Islam, I think my blackness negates my Islam.

Being Muslim in America means that practicing your faith is a political art and that being Muslim now is inherently political. I also think that a large part of it is having to exist and navigate through various understandings of Islam and learning to tell our story through that.

I think that I have a responsibility to speak out about my experiences, especially since I am at such a unique and nuanced position as a black Muslim woman, to share a story that isn’t really talked about.