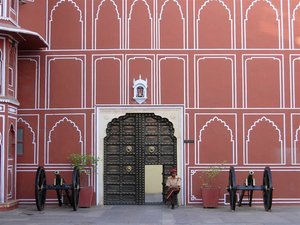 One year ago, I wrote about the controversy that unfolded at the Jaipur Literature Festival in Rajasthan, India, when Salman Rushdie was prevented from attending after a scholar at the Darul Uloom Deoband, an Islamic center of learning, voiced protests. Several authors spoke in Rushdie’s defense by reading from his banned work,The Satanic Verses, and they were in turn stopped when police arrived on the scene. One of those authors, Hari Kunzru, became embroiled in no less than seven (7!) separate lawsuits related to the debacle. Kunzru had no plans to attend the festival this year. Nor did Salman Rushdie. However, Rushdie was in the country to promote the adaptation of his Booker Prize-winning novel Midnight’s Children and traveled within a few hundred miles of Jaipur.

According to the Times of India, this year’s event received nearly 120,000 visitors, and speakers addressed topics such as sexual taboos, Buddhism, and feminism. Author Jeet Thayil was brave enough to return to the festival after Muslim groups had called for him to be banned forever for defending Rushdie onstage, and he collected the $50,000 DSC Prize for South Asian Literature for his novel Necropolis. But his presence came at a cost: he had to be accompanied by a plainclothes Rajasthan policeman throughout the event. In a witty post at English PEN, Thayil shared his reaction to the Dalai Lama’s opening speech, during which the Dalai Lama argued that all religions promote peace and harmony:

The protests were reported daily on the front pages of the national press, and it seemed then that at least one part of the Dalai Lama’s fantasy was accurate: religions were indeed similar, but only because they were based on the opposite of love and trust.

The festival otherwise proceeded amicably, at least until Ashis Nandy, a clinical psychologist and academic, incensed audiences by stating during a discussion on corruption that “most of the corrupt come from the OBC, SCs and now increasingly STs.”

For those of you who are unfamiliar with these acronyms (like me), OBC stands for “Other Backward Classes,” SC stands for “Scheduled Caste,” and ST stands for “Scheduled Tribe,” respectively. These classifications are utilized by the government to combat a legacy of discrimination towards historically disadvantaged groups in India. Since Nandy was speaking about systemic corruption, audiences drew from his statement that he was claiming that these groups were more prone to corruption than others. The local BJP government threatened to press charges against Nandy after his remarks and he has been burnt in effigy at an otherwise peaceful protest, all while Nandy himself protested that his words were taken out of context. As Monobina Gupta summarized at The Times of India:

Within hours of Nandy’s provocative utterances, an FIR [First Information Report] was filed against him under the Scheduled Caste and Scheduled Tribe (Prevention of Atrocities) Act. Nandy now faces non-bailable charges, carrying imprisonment of up to 10 years.

But it would be a mistake to insist that this year’s festival is the same as the 2012 event. Last year, Salman Rushdie was prevented from attending because of threats of violence against his life, and authors who rose to his defense were equally silenced by the festival organizers and the police. This year, despite vocal protests by various groups, the festival stuck to the program and even Ashis Nandy himself was able to debate and speak in public. It is possible that journalists in the world’s largest democracy were circling for a story, and, if so, they have either made a great deal of a slip of the tongue or exposed an embedded attitude about discrimination. As Monobina Gupta argues convincingly in her post, Nandy’s words do not eliminate the need for debate and discourse, especially if his argument was more sophisticated than his few words let on. What better place to debate than at a literature festival?

The government of Rajasthan has not prosecuted Ashis Nandy for his words at the time of this writing, and he may have escaped sanction. Either way he should receive full and fair due process under the law. The sobering fact is that Jaipur has become a sort of proving ground for free expression, where writers can both discuss human rights and experience, first hand, the extent of the reach of those rights in both edifying and terrifying ways.