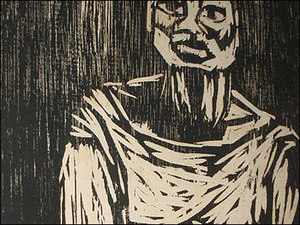 Setting: A dingy jail cell side-by-side with another cell already filled with one inmate.

Dottie Perkins, a tough-looking, stocky, large-breasted correctional officer drags Frankie Hart, an inmate, into an empty cell center-stage. Prisoner Johnny Reubens is already located in an adjoining cell, though the prisoners can’t see each other because a wall separates them—they speak through the cells. Frakie is resisting getting tossed in the cell.

DOTTIE: (Tossing Frankie into the empty cell) Here you go Frankie. Back again none too soon. Couldn’t resist coming back could you? Is it my smile? Or my size that keeps you coming back to jail? (Laughs)

FRANKIE: (Crashing into the cell and settles as it closes) I tell you what Dottie, you gotta smile only a mother could love. Your size is a different story. (Looks over her breasts seductively)

DOTTIE: (Looks over her shoulder as she turns away) That’s Miss Perkins to you Frankie Hart. (Laughs) Quick-fix Frankie. I knew you’d be back. (Exits stage left)

FRANKIE:(Starts to settle in his cell, make his bed to lie in…) Dumb broad. One of these days if I even get out of this mess… (Cocks his head to listen for someone on the other side of the cell wall) Psst! Hey, anyone over there?

JOHNNY RUEBENS, a fellow prisoner lounged back in his bed staring up at the sky smoking a cigarette and blowing smoke rings.

JOHNNY: Yeah Frankie, it’s your boy, Johnny. Johnny Ruebens from East Terrace. (Gets up off his bunk and walks to the cell bars) What brings you back so soon?

FRANKIE: Aw Johnny. Johnny…Johnny…When I get outta this cell and outta this mess. I’m gonna get back at every one of those bozos they call “correctional officers.” Corrections my ass. Just a bunch of goddamn overpaid babysitters if you ask me. Hey Johnny, got another smoke?

JOHNNY: Sure thing Frankie (Hands Frankie a lit cigarette though the cell bars) Wow, Quick-fix Frankie, didn’t you just get out the other day? What brings you back so soon, And please don’t say that it’s Double-D-Dottie.

FRANKIE: (Inhales his cigarette and deeply exhales) Aw man Johnny, Johnny. They got me for homicide, first-degree, second-charge this week, third-strike and I’m out Johnny. This is no joke. This is serious. This is a mistake…a mistake you hear me?! (Shouts loud enough so that Miss Perkins can hear him)

JOHNNY: Calm down Frankie. Now quiet. I believe you Frankie. But yelling ain’t gonna make no bit of difference.

FRANKIE: Aw Johnny, you’re right It’s just this bum charge they got on me. Homicide! Can you believe it? Some eighty-year-old woman knocks her own self and I get stuck with the charge. Damn cops don’t know the truth if it bit them on their ass. (Yells loud enough so that Dottie can hear)

DOTTIE: (Enters stage left) Quiet down in there you. From what I hear you wouldn’t know the truth if it bit your ass either! (Rattles her baton on the cell bars) An eighty-year-old grandmother all alone! How could you? Oh, you’re gonna fry for this one. Three-strikes Frankie and you’re out. No sunshine for where you’re headed. (Exit stage left)

JOHNNY: Whoa Frankie. Sounds pretty serious. (Pauses) So did you do it?

FRANKIE: What kind of question is that? Of course I didn’t do it. She did it herself the ol’ broad. I knew I shoulda’ stayed with her just a little longer.

To read the rest of the play, click here.