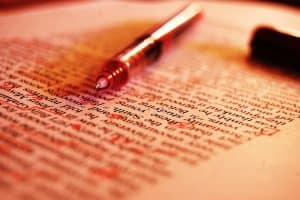 If rules are made to be challenged, then it’s not surprising that grammatical conventions often find themselves on the chopping block. From the more minute—like the removal of a hyphen in the word “email”—to the arguably revolutionary—like the introduction of a more inclusive, gender-neutral version of French, a language notorious for its resistance to change—language, like society, is ever evolving. But while English teachers and copy editors alike may cringe at the ways texting and Twitter have morphed punctuated sentences into unnecessary burdens, there are many styling points that have still, stubbornly, stuck around.

Consider the capitalization of “Internet” which, despite common usage, remains a requirement in many publications. Or the infamous diaeresis (two dots placed over a vowel to indicate that it is sounded in a separate syllable) that continues to dot The New Yorker’s pages, though its copy editor admits that most readers would manage words like “cooperate” just fine without it. Another, for many publications, is the singling out of non-English words, a maneuver that’s been met with some resistance.

Italicizing isolated non-English words, dictated by The Chicago Manual of Style as those “likely to be unfamiliar to readers” or to cause “confusion” might, you could argue, make a good deal of sense. But whose “unfamiliarity” and “confusion” is centered in this argument? And whose is sidelined, whose familiarity is made other?

In a video that emphatically features cigars and a guitar, best-selling author Daniel José Older responds:

“When a native speaker speaks and switches back and forth between languages,” says Older, “it does not sound like this.” Pausing between English words, the camera switches to Older, taking a drag from his cigar. “La biblioteca,” he says. “That’s not what we sound like. That’s not what anyone sounds like. But when you put italics in a sentence, that’s what it looks like and that’s what it reads like.”

Rather than aiding with comprehension, Older argues, italicizing foreign words hinders comprehension. The physical appearance of the slanted words on the page suggests a shift in the sentence, an otherness—but that shift doesn’t exist for multilingual populations who code-switch seamlessly between languages, who might think in one language and dream in another. Whether a speaker switches languages intentionally or unintentionally—utilizing a word that cannot be translated, communicating more effectively with a specific individual, or any other host of reasons why one might employ a particular phrase in a particular language—the switch is not an interruption or a digression from “standard” speech, but a fluid, efficient method of communication.

In refusing to italicize Spanish words in his novels, Older rejects the notion of clarity as one that distinguishes between languages. Instead, he argues that clarity, in this context, is a matter of emphasis: “You know when you should italicize another language? When there’s emphasis on it. Just like with any other word you would italicize.” To italicize, therefore, might be to uphold a status quo that ranks comprehension for some over comprehension for others.

While not all writers will agree with Older’s assessment, the conversation surrounding the italicization of non-English words taps into a broader conversation about a work’s relationship to its audience—to what degree does a writer write for an audience? And who “should” a writer be writing for? If italicizing non-English words caters to a population that is “likely to find foreign words unfamiliar,” a population that might not recognize a Spanish word as Spanish, a population that might not look or speak or act like Older’s characters, then leaving those phrases in roman can serve as a referendum on that notion. And it’s not the only one.

In “Poem To Be Read from Right to Left,” for example, poet Marwa Helal employs a form she invented called The Arabic—a form comprising an Arabic letter, footnote, and numeral and that “vehemently rejects you if you try to read it left to right.”

“To vehemently reject, in this case, means to transfer the feeling of every time the poet has heard an English as Only Language speaker patronizingly utter in some variation the following phrase: “Oh, [so-and-so] is English as a Second Language…” As if it was a kind of weakness, nah.”

Like Older’s multilingual characters, Helal’s poem exists neither fully in one lingual space nor in another, but sits at an intersection that more accurately reflects the intersectional space at which many Americans sit. Perhaps this requires more work for some English-language readers, but at a time when language feels increasingly simplified, when politicians’ clichéd catchphrases run rampant and articles are elevated for how quickly they can be skimmed, insisting on complexity and on recognizing a broader audience can serve as a welcome respite.

This reminds me of something Ta-Nehisi Coates said last November on an episode of On Being: “When I started writing, there was a school of writing that says: Given that the audience is obviously—when you reach to any size, is not gonna be majority-black—that you have to hold people’s hands. You have to explain it to them. And the Malcolm [X] influence on me said: No, you don’t. Write as you hear it. Write as you hear it.”

So while grammar and style rules often prove indispensable to writers and editors who wish to communicate ideas in ways others will understand—and equally indispensable in ensuring that writers avoid communicating information incorrectly, an all too important task when false news and deliberate misinformation campaigns threaten our democracy—that does not mean these rules should remain unchallenged.

In an era where powerful men are being toppled and long-held notions of “acceptable behavior” are changing, writers remind us that the rules governing language—a human invention subject to the same assumptions, biases, and logic as its creators—are also not free from scrutiny, and that we must continue to interrogate the status quo and the implications that lie behind it.

And if you’re still not convinced of the difference a choice in style or grammar might make, a recent News-Gazette headline shows exactly how important the placement of punctuation can be: 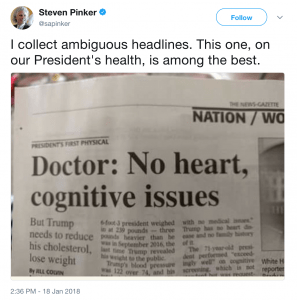