By Brianna Goodman and Kyle Dacuyan

In this week’s installment of The Intersection, PEN America’s Kyle Dacuyan and Brianna Goodman have a conversation about difficult conversations—the deep divisions in our nation that make certain dialogues a challenge and what might be done to make such exchanges more possible.

KYLE DACUYAN: I was recently in Alabama to meet with PEN America Members, writers, reporters, and organizers, and talk about some program possibilities through our Press Freedom Incentive Fund. I was curious to learn more about how communities in the state are being both divided and brought together—around which narratives, experiences, and sources of information (or misinformation, as the case often is).

I was reminded in many of my conversations, and just through my experience of public space, that I was in a real civil rights corridor. In downtown Birmingham, the bus stops on most blocks share information about public actions and local civil rights leaders. There’s upfront acknowledgment of violent history in the sculptures of water cannons and attack dogs circling Kelly Ingram Park. Many of the older members of communities in Alabama were people who shaped and brought attention to civil rights movements in the 1960s.

I was also reminded that this work is not frozen in time—there’s necessary intersectional and intergenerational work happening between racial justice activists, advocates for immigrants and refugees, LGBTQ+ rights organizers, and more. I asked organizers I met how they saw their movements growing. Are students from universities staying around and contributing to activity? Is there door-to-door work happening in the suburbs? Are there people joining who may have shared the values of a movement, but not been engaged?

Yes, yes, yes, I heard. While movement growth is happening—urgently and quickly—the work of raising consciousness, “changing hearts and minds,” seems to be a more entrenched challenge. Deep divisions across the state are playing out, perhaps most visibly and dramatically in the special election for Attorney General Jeff Sessions’s former Senate seat. On one side is Doug Jones, a Bernie Sanders-backed challenger who successfully prosecuted against members of the KKK that planted a bomb at the 16th Street Baptist Church in 1963. On the other is Roy Moore, a former judge who’s brandished his gun at rallies and received significant support from evangelicals.

As I look at the gulf between these bases of support, I’ve been thinking about “difficult conversation”—what that means, how it happens, and what we hope can come from it. We might start by getting more specific. What are issues, stories, or moments, for example, around which difficult conversation has been happening?

BRIANNA GOODMAN: Maybe it’s because it’s November, but I’m thinking about last year’s proverbial post-election Thanksgiving dinner, and the slew of articles that came out in advance of the holiday: “Seven Tips for Surviving Thanksgiving Conversation,” “Dreading post-election Thanksgiving? 4 Tips for survival,” “A short guide to surviving a post-election Thanksgiving.” That the idea of spending a dedicated amount of time talking to one another was a matter—even jokingly—of life and death was put forth by so many media outlets is indicative of a mainstream narrative that many subscribe to: that conversations across divide are hopeless, even useless, and that divisive topics are better left untouched. And as we’re bombarded by televised pundits yelling over one another and political candidates resorting to name-calling in debates meant to address serious issues that affect the electorate, it can feel like there aren’t any models of productive, compassionate conversation to look to.

But I’m recalling a Facebook Live video from On Being host Krista Tippett that was broadcasted around this time last year as part of On Being‘s Civil Conversations Project—a “conversation-based, virtues-based resource towards hospitable, trustworthy relationship with and across difference.” The video is a response to a letter from a listener who was losing faith in the ability of conversations to, as you say, “change hearts and minds.” The listener—a supporter of Hillary Clinton—cites an “illuminating, but sadly unsurprising” conversation she shared with a Trump supporter and her feeling that “there was at the outset of that conversation virtually no chance either of us would leave truly affected by the other.” Tippett’s response is to challenge how we frame these sorts of difficult conversations—if we determine that the only outcomes are either “you’ve convinced them or you haven’t, you’ve joined forces or you haven’t,” then these conversations are likely always going to feel like events that require survival guides.

Instead, Tippett suggests that we aim not necessarily for shared mindsets, but for shared questions: “questions that we share even amidst whatever is dividing us and whatever makes us different from each other.” I think about the Alabama election you refer to, and wonder what “shared questions” would look like between those divided populations—what shared experiences affect Alabama residents regardless of party? And as you write, what could we hope would come from a conversation between those citizens? If we couldn’t guarantee that such a conversation would “change minds,” would there be potent value still in those parties conversing not to convince, but to listen? Tippett tells her listener that “we know from brain science . . . that people who feel they’ve been heard, even if they end up on the losing side of whatever the event or the debate is, ultimately are better able to gracefully accept the result of what happened.” But do we think there is actionable value in such a response? Is acceptance progress?

DACUYAN: I think it’s wise to challenge the notion that conversations have to result in persuasion, or the assertion of one’s correctness. And I think, similarly, we can challenge our notion of the word “acceptance.” To accept an outcome of an election, for example, doesn’t necessarily mean my own values have changed in response, nor that I support that outcome. But to recognize the outcome for what it is—a new condition or reality I have to live with—does factor into where I give my energy, curiosity, time, etc. 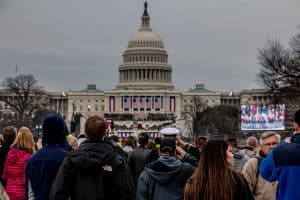 This time last year was definitely challenging. I will admit that I didn’t go home in November or December because I so dreaded the conversation. I don’t think that dread was one-sided. I grew up outside of D.C., and my first time back post-election was for the Inauguration. When I went into D.C. that day, I didn’t bring anything that would necessarily identify how I voted, and when I encountered people similarly unmarked in the street—no MAGA hat, no protest sign—I remember palpably registering mutual fear. We couldn’t bring ourselves to talk to one another, let alone make eye contact.

I’m trying to push myself now to move beyond that fear, and to engage in conversations that won’t necessarily affirm my worldview. Do I think there’s value in conversation that doesn’t reach consensus? Speaking for myself: yes—because at least I take away learning about how and where difference is happening. I personally find it more valuable (that is: actionable) to engage this difference directly, rather than to continue formulating ideas of difference strictly through the media I consume. I also recognize that there are some people who will not engage with me in conversation because of my identity; likewise, I recognize that there are people who will engage with me but not with others. And I won’t engage myself in conversations with people who use abusive language toward me.

So that opens up two questions for me: How do we get people in the room together, and then how do we facilitate the conversation in such a way that these kinds of shared questions and learning can happen?

GOODMAN: The Chicago Community Trust’s annual “On the Table” forum might serve as one model for how these types of conversations can occur. The forum, meant to “elevate civic conversation, foster new relationships and inspire collaborative action,” draws Chicago-area residents from a diverse array of backgrounds to share a meal and conversation about issues affecting their communities.

According to the trust’s findings, the majority of attendees came out of last year’s forum having conversed with at least one person they hadn’t previously known. And, even more encouraging, 91 percent of respondents said they were likely to take action regarding a topic discussed at the event. This means the trust has managed to do a few different things we’ve been discussing: They’ve gotten various populations in the room together, they’ve facilitated meaningful conversation, and they’ve inspired action. 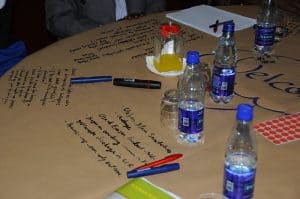 We’ve been talking a bit about how the framing of these sorts of conversations might affect their outcomes—or at least our expectations—and so I was particularly interested to see how the trust frames the premise of “On the Table.” Phrases like “inspire collaborative action,” “work together,” “our communities,” and “the power of people coming together” emphasize that the forum is not a competition between divisive ideologies, but a space for crowd-sourcing ideas around shared issues—shared questions. The website simultaneously elevates ideas of listening (“learn from and with each other”) with sharing and contributing (“your voice matters”)—making clear that the event is based around mutual exchange.

And, more subtly, the forum’s description draws on language that has the potential to resonate with a variety of populations. For example, “we can work together to make our communities stronger, safer and more dynamic” touches on ideas of “safety” and “strength,” words that often appear in more conservative frameworks, while “dynamic” might resonate with ideas of change more often associated with liberal frameworks. I might be reading too far into this particular passage, but as our community is one of writers and readers who make language both their leisure and livelihood, a careful consideration of how our language might open—or close—doors feels like something we can do to help encourage these kinds of difficult conversations to occur.

This Is Not a Good News Story