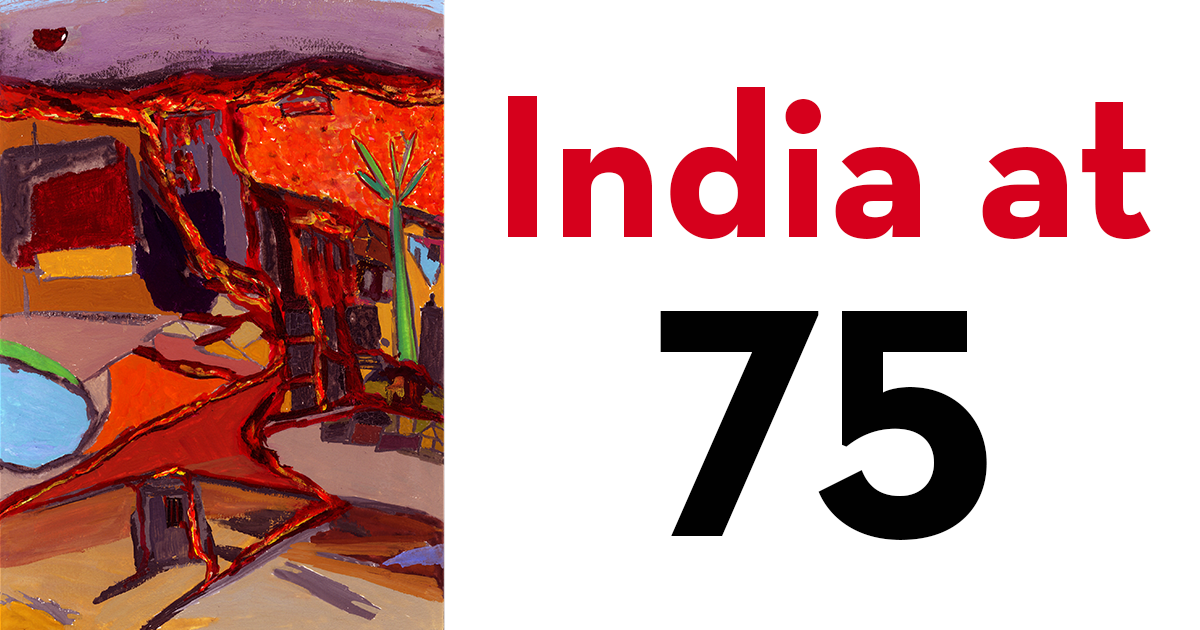 On August 15, India will mark 75 years of its independence. What should be a moment of celebration and joy has become a moment of deep despair and reflection. At independence, India offered a beacon of hope—a multi-everything, secular society choosing democratic governance and a Gandhian vision of inclusion and tolerance. Prime Minister Jawaharlal Nehru spoke of India’s ‘tryst with destiny,’ and the hope was that the country would live up to the dream of its Nobel Laureate for literature, Rabindranath Tagore: “Where the mind is without fear,‘…. ’into that heaven of freedom, let my country awake.”

But India retained many colonial-era laws that restricted freedoms and, over the years, added more such laws, undermining its democracy. An internal Emergency in 1975 curtailed civil liberties and jailed dissidents. Since its founding, India has witnessed insurgencies and brutality by armed forces and the police against its citizens, as well as periods of horrific violence along caste and communal divides.

But the election in 2014 has transformed India into a country where hate speech is expressed and disseminated loudly; where Muslims are discriminated against and lynched, their homes and mosques bulldozed, their livelihoods destroyed; where Christians are beaten and churches attacked; where political prisoners are held in jail without trial. Dissenting journalists and authors are denied permission to leave the country. The institutions that can defend India’s freedoms—its courts, parliament and civil service, and much of the media—have been co-opted or weakened. In PEN America’s most recent Freedom to Write Index, India is the only nominally democratic country included in our count of the top 10 jailers of writers and public intellectuals worldwide. In recent years, India has seen an acceleration of threats against free speech, academic freedom and digital rights, and an uptick in online trolling and harassment.

To mark India at 75, PEN America reached out to authors from India and the Indian diaspora to write short texts expressing what they felt. Together they make a historic document. Authors who were born in British India responded, as did India’s Midnight’s Children and grandchildren. Authors from around the globe sent us their thoughts, as did authors from India’s many languages, communities, faiths and castes. Some voices are optimistic, some prayerful, some anguished and enraged. Some suggest defeat, others venture hope, still others are defiant. The authors hold a spectrum of political views, and may be in disagreement about much else, but they are united in their concern for the state of Indian democracy. We invite you to read their ideas of what India was and ought to be, and what it has become. 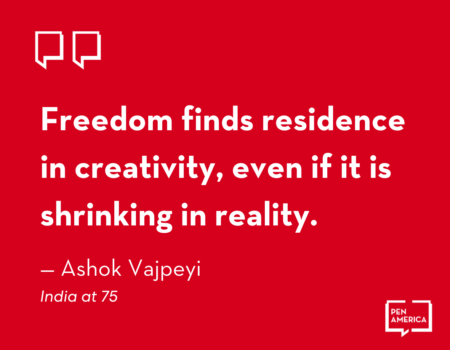 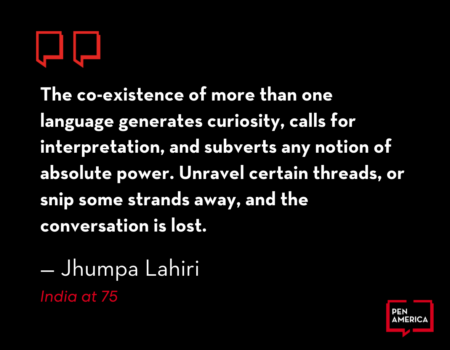 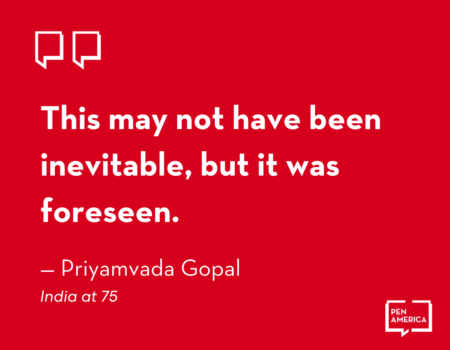 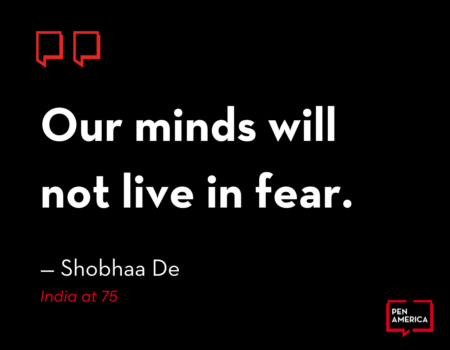 What is at Stake

I am writing this as an act of love. I was born in India, and I love India with all my being. But this country that I love is facing the gravest threat to its democracy since its founding.

Indian democracy is one of the 20th century’s greatest achievements. Over 75 years, we built, against great odds, a nation that for the first time in its 5000-year history empowered women and the Dalits, people formerly known as untouchables. We largely abolished famine. We kept the army out of politics. After independence, many people predicted that we would become Balkanized. Yugoslavia became Balkanized, but India stayed together. No small feat.

But I write this today to tell you: things in India are more dire than you realize. India is a country that is majority Hindu, but it is not officially a Hindu state. The people who are in power in India today want to change this. They want India to be a Hindu ethnocratic state, where all other religions live by Hindu sufferance. This has practical consequences: people of other religions are actively harassed, even lynched on the streets; their freedom to practice their religion in their own way is circumscribed. And when they protest, they are jailed and their houses bulldozed. Most worrying, much of the judiciary seems to be sympathetic to the Hindu nationalist agenda, and issues its verdicts accordingly.

There is also sustained and systematic harassment of writers, journalists, artists, activists, religious figures—anyone who questions the official narrative. We who have attached our names here are taking great personal risk in writing this: our citizenship of India could be revoked, we could be banned from the country, our property in India seized, our relatives harassed. There are many others who think like we do but have told us they can’t speak out, for fear of the consequences. I never thought I’d use the word ‘dissident’ in describing myself and my friends who’ve compiled this document; I thought that word only applied to the Soviet Union, North Korea, China.

It is crucial that India remains a democracy for all its citizens. India is not Pakistan, Iran, Afghanistan. Not yet. A lot of India’s standing in the world—the reason we’re included in the respectable nations, the reason our people and our tech companies are welcome all over the world—is that we’re seen, unlike, say, China, as being a multiethnic democracy that protects its minorities.

With over 200 million Indian Muslims, India is the third largest Muslim country in the world. There are 30 million Indian Christians. There are Sikhs, Buddhists, Jains, Zoroastrians, Atheists. They are as Indian as I am—a Hindu who’s proud of being a Hindu, but not a Hindu as Narendra Modi and the BJP seek to define me.

The alienation of Indian Muslims would be catastrophic, for India and the world. They are being told: you are invaders, this is not your country, go back to where you came from. But Indian Muslims did not come from elsewhere; they were in the country all along, and chose which God to worship. After the Partition of India and Pakistan in 1947, they voted with their feet; they chose to stay, and build a nation.

The challenges facing India in the next 75 years are colossal, perhaps even greater than the first 75 years. This year, northern India saw the hottest temperatures in history, reaching 49 degrees Celsius (120F). Next year looks to be even hotter. By the middle of the century, New Delhi could become uninhabitable.

The country also has an enormous, restive, and largely unemployed youth population—half of its population is under 25. But only 36% of the working-age population has a job. To meet these challenges, it is crucial that the country stay united, and not fracture along religious lines, spend its energies building a brighter future instead of darkly contemplating past invasions.

In this time when country after country is turning its back on democracy, India has to be an example to countries around the world, this beautiful dream of nationhood expressed in the Hindu scriptures as ‘Vasudhaiva Kutumbakam’—the whole earth is a family. We should all be rooting for this incredible experiment in multiplicity to work. As goes India, so goes democracy.

Suketu Mehta is the author of Maximum City: Bombay Lost and Found, a Pulitzer Prize Finalist, and This Land is Our Land: An Immigrant’s Manifesto. He teaches journalism at New York University.

The India at 75 project was overseen by the PEN/Barbey Freedom to Write Center staff, including Liesl Gerntholtz, Karin Deutsch Karlekar, Veronica Tien, and Rachel Powers.

This project would not have been possible without our partnership with a number of writers from India and in India, from conceptualization to curation and outreach. We thank them for their essential help and support.

In a separate initiative, over 100 writers, journalists, creative artists, and supporters of PEN America, PEN International, and the global PEN network signed a joint letter urging President Murmu to support democratic ideals and free expression in the spirit of India’s 75th year of independence.