Hairy Bacon and Digital Censorship in China: an Interview with Jason Q. Ng 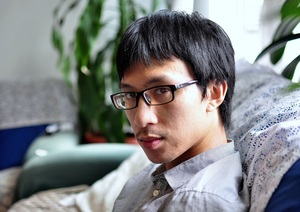 For the past decade, PEN has campaigned in support of Chinese writers such as imprisoned Nobel Laureate Liu Xiaobo. In May we awarded our PEN / Barbara Goldsmith Award to Uyghur academic Ilham Tohti, who is currently detained on unfounded charges of supporting separatism. But popular writers in China are not the only ones under threat. Today, many people in China rush to popular microblogging services to gather information and express themselves. This unique medium is so prevalent and so heavily censored that it has become a field of study unto itself. We sat down with author, editor, and microblog scholar Jason Q. Ng to find out more about this vibrant phenomenon.

PEN AMERICAN CENTER: Can you give us an overview of how social media is used in China, specifically microblogging?

JASON Q. NG: Social media is really a transformative force in China at the moment. The platform I study the most is Weibo, which is akin to what Twitter is like here in the U.S. It’s a microblog, everyone posts short messages to their own personal page and it’s very easily shared. It’s a fascinating medium that is only relatively new; Weibo started in late 2009 and since then it has gained tens of millions of users. It has started national conversations and brought down officials both at the local and national levels, and it’s clearly had a major influential effect on both citizens and the government. The government recognizes how social media—and particularly Weibo and these microblogs—may be used to its benefit, in that officials can use it as a way to respond to local concerns, but microblogs can also be used to take down corrupt local officials. They can be used as a force for good as a way of reacting to local netizen concern, but microblogs are also a destabilizing factor, and that’s why there’s so much censorship. Then there’s the other side of the story, in that not only can governments use it to react in a positive manner to citizens, but they also use it for surveillance and monitoring. Social media has definitely changed a lot of the ways in which governments interact with citizens in China. Certainly the narrative isn’t as simple as “Netizens defeating the censors and upending the government and causing revolution.” There is still a lot of frivolous sharing of gossip and celebrity news like you would expect here in the West. But microblogs have given certain voices an avenue that wasn’t there before to try and correct injustices.

PEN: Can you tell us a little bit about your book Blocked on Weibo?

NG: Weibo started in late 2009, and really picked up steam after the Wenzhou train crash, which was this major incident after a high-speed train collision. Railway officials were implicated in attempting to cover up the disaster, and that’s when Weibo really gained attention. I went to grad school and became interested in the ways that authorities are able to mold the internet in ways that we thought were impossible. Here in the West we just assumed that the Internet was such a flexible force that it could get around all sorts of censorship and information control. And clearly as we’ve seen in cases not just in China or Russia but even here in the U.S., the Internet is very much able to be manipulated by governments and authorities. I became particularly interested in the specific keywords that are blocked on social media on Weibo. I think a lot of people had been tracking the sort of things that had been blocked on Weibo, meaning when you search for certain words you won’t get any search results, and I was particularly interested in understanding the decisions by authorities. Where’s the line between what is able to be discussed and what is not able to be part of the discourse? I was fascinated by this middle ground. Obviously things like searching for Tiananmen Square are sensitive and blocked. But what about, for example, marijuana? What about this in-between ground? I was very interested in those shades of gray and I started to research them.

PEN: Can you give us an example; you just mentioned marijuana—is there one that stands out to you that’s discussed in the book that you find interesting?

NG: I uncovered all these individual keywords about “culture,” “context,” “language,” “history,” basically explaining why they might be sensitive. The one that really crystalized for me how interesting the censorship was, was this keyword “máo laròu” which literally means hairy bacon or hairy sausage, because máo means hairy and laròu is preserved meat. I was sort of at a loss. I just couldn’t fathom why it was blocked so I asked some local, native Chinese speakers, and they didn’t really have a sense of what it was. But eventually I stumbled on a recipe for how to make this so-called hairy bacon, and it dawned on me that what they were describing was in fact not just a kind of meat that you eat, but a different sort of meat. In fact, they were talking about Mao Zedong’s body, which is laid outside Tiananmen Square. Máo, which means hair, was also a reference to Mao Zedong. And the laròu that the preserved meat refers to means “corpse.” That was a fun way of getting at this subculture of coded keywords and language and wordplay that obviously Chinese internet users love to use because of the restrictions on users. But it also speaks to how the censors were able to catch up to them, because I was only able to discover this coded keyword because it was censored. It also speaks to how Internet censors are trying to chase netizens in this cat-and-mouse game.

PEN: So it’s basically banning the discussion of the Tiananmen massacre.

NG: It has to do with a lot of things. I’ve seen máo laròu used as a way of criticizing both Mao or the current party officials. For instance, they would say something like “Máo laròu,” meaning Mao’s dead body, “would never approve of what’s happening with the market reforms that are taking place in China right now.” Referring to him in such a crass manner is not just an insult to Mao, but also often an insult directed at the CCP.

PEN: Over the past year you were a Google Fellow at Citizen Lab, which is one of the most exciting and courageous academic institutions that’s looking at digital freedom and censorship and the Internet. What were you researching?

NG: It was a whole bunch of projects. Primarily I was there to support their different work on China. They had done a lot of research into reverse engineering TOM Skype and other communications services in China. For instance, there’s a service called Sina UC, which is also run by the company that created Weibo and the Chinese version of Skype. I also looked at mobile apps like LINE, which is really popular in Korea and Japan, and at WeChat, which is a popular chat application that has really become one of the dominant social media forces in China right now. We reverse engineered a number of these applications, figured out the keyword list, and then I was tasked with helping them uncover what the words were, why they might be blocked, and potential trends and changes. Another project was looking at Chinese online encyclopedias. Wikipedia China is obviously quite popular, but it’s certainly not as popular in China as these other online encyclopedias: Baidu Baike and Hudong. It was great to really do a cross-comparison between these three services. I wrote a computer script that compared articles across all three encyclopedias, and I was able to come up with some interesting conclusions about how Internet users are speaking about the same topics in different ways.

PEN: Where do you see things headed? You’ve been studying this for a while now; it seems to be evolving rapidly. We see the possible sale of parts of Alibaba online, there are new technologies coming up everyday—new circumvention technologies, new microblogging technologies. What are some of the things we should be watching out for in 2014 and 2015?

NG: I think the recent IPOs [initial public offerings] of Alibaba and Weibo speak to the growing importance that foreign investments and foreign users will have on these Chinese tech companies. I think that’s going to be the key story going forward, because clearly Chinese authorities and government recognize that there is a potential limit to how much growth can be had purely just within China. Tencent, Alibaba, and Sina have experienced tremendous growth both in terms of user numbers, media and press, and in terms of financial wealth because of the domestic consumption of these services and tools—but once they start to recognize that they need to go abroad, they’re going to encounter a whole other host of issues that clearly Chinese authorities are thinking about. For instance, how do we ensure that a product like WeChat, which is censored within China to a certain extent, doesn’t get so stuck with the stigma of Chinese information control to the point where it has trouble gaining users? I think a lot of these companies are going to brush up against that issue, and it will be interesting to see how they respond. We’ll have to see if the Chinese authorities will allow more flexibility in allowing these products to be used abroad. If censorship of searches are lifted off WeChat in the U.S. or wherever, how are domestic Internet users in China going to feel about that? What’s the pushback of that going to be? Or will they be able to successfully produce two different types of products, one for home and one for abroad?

PEN: PEN is a writers’ organization—what lessons do you have for writers who are interested in China, and what have you observed about Chinese writers in your work?

NG: I’m not sure I’m qualified to offer any advice, but perhaps I can just provide a reminder that, while social media has been a great boon to people who are interested in writing about China, it’s all too easy to fall into the trap of mining and cherry-picking social media for stories that merely confirm an assumption or viewpoint you already have. It’s important to keep in mind that the voices on the Internet and on social media in China are just a subset of the many perspectives all across China and to not generalize too much.