From the Archives: Margaret Atwood, Power of the Pen 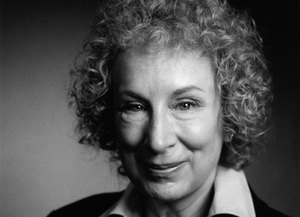 Each week, PEN America will be highlighting some of its favorite manuscripts, advocacy campaigns, readings, photos, and transcripts in our From the Archives feature. Today’s feature, from Margaret Atwood, was originally published in 2005. Read the full transcript here.

Margaret Atwood: Does writing change anything? I took this question literally, and I’m reading two pieces. One is about our feeling as writers—probably not, we think sometimes. And the second is the opposite answer. The first piece is called “The Tent.”

You’re in a tent. It’s vast and cold outside; very vast, very cold. It’s a howling wilderness. There are rocks in it, and sand, and deep boggy pits you can sink into without a trace. There are ruins as well, many ruins. In and around the ruins there are broken musical instruments, old bathtubs, bones of extinct land mammals, shoes minus their feet, auto parts. There are thorny shrubs, gnarled trees, high winds, but you have a small candle in your tent. You can keep warm. Many things are howling out there, in the howling wilderness. Many people are howling, some howling grief because those they love have died or been killed. Others howl in triumph because they have caused the loved ones of their enemies to die or be killed. Some howl to summon help, some howl for revenge, others howl for blood. The noise is deafening. It’s also frightening. Some of the howling is coming close to you, in your tent, where you crouch in silence hoping you won’t be seen. You’re frightened for yourself, but especially for those you love. You want to protect them. You want to gather them inside your tent for protection.

The trouble is your tent is made of paper. Paper won’t keep anything out. You know you must write on the walls, on the paper walls on the inside of your tent. You must write upside down and backwards. You must cover every available space on the paper with writing. Some of the writing has to describe the howling that’s going on outside, night and day among the sand dunes and the ice chunks and the ruins and bones and so forth. It has to tell the truth about the howling. But this is difficult to do because you can’t see through the paper walls, and so you can’t be exact about the truth, and you don’t want to go out there, out into the howling wilderness, to see exactly for yourself.

Some of the writing has to be about your loved ones, and the need you feel to protect them. And this is difficult as well because not all of them can hear the howling in the same way you do. Some of them think it sounds like a picnic out there in the wilderness, like a big band, like a hot beach party. They resent being cooped up in such a cramped space with you and your small candle and your fearfulness and your annoying obsession with calligraphy, an obsession that makes no sense to them. And they keep trying to scramble out under the walls of the tent. This doesn’t stop you from your writing. You write as if your life depended on it. Your life and theirs.