from Recollections of a Face 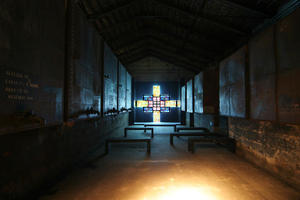 This week in the PEN Poetry Series, guest editor Dawn Lundy Martin features an excerpt from a poem by Karen Lepri. About Lepri’s work, Martin writes: “I believe there are things that cannot be aptly attended to in language—that language, no matter its persistent power of constructing our selves and no matter whose able imaginations set out to wrought ordinary language into art, sometimes it fails. Sometimes to speak the thing is to lie about it. What Karen Lepri shows us in this intense excerpt from Recollections of a Face is that linguistic apparatuses can be built so that we see the body hanging tenuously from a scaffolding, and in those moments when language is stripped and bare, we feel the ghostly lines around our existence. They are vibrational. Lepri’s poetry is the language of that vibration as it stands powerfully next to a story that resists telling.”

from Recollections of a Face

Among the most well-known, Mona Lisa, and the least well-known, Mona
Lisa. What’s going on inside her head? the countless wonder. What can the
front-of-the-house tell us about the back-of-the-house, the main
propeller? Several times a day I misread the face of my lover—I think she’s
this but she’s that. The face, no help. Mere transfer station for the senses.
Here lie the eyes, the nose, the mouth, and, depending where you draw
the line, the ears—sight crosses smell crosses taste crosses hearing. No
wonder we get confused looking at each other. A wonder we recognize
each other at all, after years, after forgetting.

Luckily, the face is made or can be made either with make-up or more
technical interventions. To my sister, they call it advancement. The
mundane implication is better, but for the medical community they
literally intend “forward movement.” With the exception of her exorbitant
eyes that reached out to the world in a way discomfiting for most, the rest
of her face (cheeks, chin, mouth) sunk backward in shyness, in a way tied
down. While they operated, they “rocked” the face forward and backward
to determine exactly how far forward they could carry it.

replaced Old English andwlita from the roots whlitan, “to see, look,” and
ansyn, “see;” in French, by the 17th century, face replaced by visage from
Latin visus or “sight”

It does not matter, the front or the back. Language (history) says: what
matters is the locus of sight. And if you see
from your ears?  And if you see from the back of your head like a child on Halloween wearing a wig
backwards?  If you cannot see, is your face nullified?  If you are unseen,
unknown, anonymous, you are said to be “faceless”—an identity unhinged
from an image of a face is no identity at all.  Facelessness, a beneficial
characteristic for high profile criminals. What to do when there is no
known profile at all?

Despite any efforts at remaking my sister’s face, she is still unbearably (to
her) recognizable. She would rather be faceless, especially when riding
subways, approaching a check-out counter, helping a small child (Honey
get away from her—don’t talk to that stranger!)—others mistake the
deformity (un-formed-ness?) for “bad form,” maliciousness or, in the very
least, incapacity. Despite her expert skills and experience as a
receptionist, few want to hire her to be the “face” of their office—the first
to greet their clients. She shelves books at Barnes & Noble. She despises
it. Sometimes, people need help finding a book, so they approach her,
hunched down over a box of newly arrived titles. When she faces them,
smiles, and says, “Can I help you?” they immediately decide she cannot.
How can she help them if they cannot recognize themselves in her?

surprise adhesions (how much)
midface rocking too hard to free

the remainder: bone dust placed along the area

upon their decision to discontinue your face

an almost loss/gain scenario
for Thera—
injured hound asked by riders
should we go on?

when the tongue failed, blood spoke
channels aburst with message
for the lookers— gentle body, gentle
rage      how
did you find the door out the room
while sleeping?

My sister went digging through boxes of old photos looking for her face
before the surgeries. She realized she had no memory of what it used to
look like. I started to wonder if, without photographs, I would have any
idea what mine used to look like, simply before getting older. But this is not
the kind of change that concerned her.  She wanted to find out: if this
is where her face is now, where did it used to be? Because it had moved
from the back of the house to the front. Now, everyone could see her.