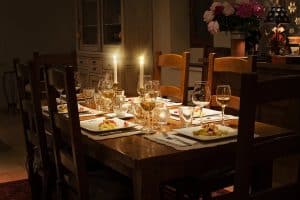 The following is an excerpt from Ri J. Turner‘s grant-winning translation of Chaim Gravitzer by Yiddish novelist Fischel Schneersohn.

Turner writes: Chaim Gravitzer by Fischel Schneersohn is a novel of epic scope, spanning approximately 500 pages across 3 volumes. At the beginning of the novel, the main character, the eponymous Chaim Gravitzer, a Chabad-Lubavitcher Hasid, is in a state of spiritual ascent, carried by his fervor into great heights of insight and charisma. However, at the very peak of his ascent, Chaim suddenly receives news of the death of his only son. This event casts him into an abyss of existential doubt, and stimulates him to undertake an epic quest, mostly on foot, throughout Jewish Eastern Europe. At first, he wanders around in the forest blinded by his own grief, but he eventually emerges and begins to explore his spiritual and ethical questions through contact with representatives of other Jewish groups, including the Chernobyler Hasidim, assimilated wealthy Jews and Maskilim (representatives of the Jewish Enlightenment movement), and non-Hasidic Lithuanian Jews at the Volozhin yeshiva.

The novel offers rich, multifaceted descriptions of traditional Jewish life in Eastern Europe, along both ethnographic and philosophical dimensions. In contrast to the vast majority of works of Yiddish literature, this novel has enjoyed a steady readership from the moment of its initial publication until today—despite, or perhaps because it is considered a heretical book in some Orthodox Jewish circles. The novel is also of interest for a contemporary secular reader, who may see it as a treatment of the spiritual-moral struggle to reconcile radical acceptance with the imperative to undertake ethical action. The novel is also remarkable for its entertainment value: Despite its length and conceptual density, it nevertheless manages to be a page-turner, complete with celestial journeys, dramatic arguments, political intrigues, tragic deaths, and satisfying romance.

The following excerpt, from the fifth chapter of the novel’s third volume (“A Trial over a Princess–A Sabbath in Volozhin”), portrays students of the Volozhin yeshiva enjoying a Friday afternoon at the river—and enjoying a charming intellectual romp as well. This scene grants us a peek into one of the novel’s main motifs: the pleasure, and in some cases ecstasy, that the characters experience through participation in Jewish religious study and devotional practice.

. . . Yoshke was a fanciful young man with blonde hair and smiling eyes. He was called Yoshke the Dreamer, or Never-Was-and-Never-Will-Be. He was one of the few boys in the yeshiva who studied not only the tricky legal sections of the Talmud, but also the stories, the wonderful legends and interpretive passages that are scattered throughout the tractates like peaceful, fertile islands in a stormy sea. In the early morning hours, he pored over books of Biblical legends and other story books, many of which he had learned by heart. Most of all, he loved to tell stories to a willing audience. He would pepper his tales with puns and colorful expressions, squinting his smiling eyes all the while, peering off into the distance. His imagination ran away with him–it was not always possible to determine whether he was telling the truth or embroidering upon it. In the yeshiva, the boys were always preoccupied with their studies, but Yoshke managed to smuggle a note of fantasy into the most serious of conversations. On occasion he would recount a debate between the early rabbis, describing every detail as if he himself had witnessed the scene. Or he would raise an erudite question regarding a point of law, and then go on to relate a sequence of surreal occurrences that had supposedly given rise to the complication. Today on the riverbank, he squinted into the distance and tossed off a new challenge for the other boys.

“Listen up, fellows, and I’ll tell you about a puzzle that caused a quarrel among the greatest geniuses in olden times. They couldn’t resolve it amongst themselves, and had to appeal to the Rambam himself for a solution. It all started with a bizarre turn of events. A powerful emperor had only one daughter, and she became dangerously ill. All the doctors pronounced her condition terminal. So the emperor put out a proclamation that whoever succeeded in healing his daughter would receive her hand in marriage along with a portion of the kingdom. As it turned out, there was a man in a country far, far away–”

“Don’t interrupt me, you boor. I’m almost done with the story. There was a man in a country far, far away, who had a special scrying glass through which he could see and hear for thousands of miles. While looking through his scrying glass one day, he heard about the predicament of the emperor and his sickly daughter. He shared the story with a friend, who possessed seven-league boots and could traverse huge distances in no time at all. So the two men set forth with the seven-league boots, and they brought along a third friend who had a special herb that could cure any illness. The latter man cured the ailing princess with his special herb, and asked for his reward according to the emperor’s proclamation–the princess’s hand in marriage and a portion of the kingdom. But the second man, the owner of the seven-league boots, claimed that the prize should be his, since the three would not have been able to reach the princess were it not for his extraordinary boots. And then the first man argued that the prize should be his, because the other two would never have found out about the princess were it not for his marvelous scrying glass. In short, since each man demanded the princess and the throne for himself, the three were compelled to appeal to various scholars to find out which of them had earned the prize according to the law. But the scholars argued and hesitated, and were unable to reach an agreement. So the emperor ordered that the case be brought to trial before a judge who was the wisest man in the world. With his magical scrying glass, the first fellow found the wisest man on that side of the world–namely, the Rambam. The second man used his seven-league boots to bring his two friends to the Rambam for the trial. So now, it’s your turn–what’s your guess about the Rambam’s verdict?”

The boys laughed dismissively, but the otherworldly image of the rescued princess twined through the riverside air. Several wispy adolescent beards twitched with a nearly-forgotten nostalgia. But Wide Moyshe-Itze was the first to call out a response. “Never-Was-and-Never-Will-Be! He has the nerve to send sorcerers to the Rambam for a trial! But the Rambam wouldn’t stand for all this nonsense–he’d throw out the fairytales, the sorcerers, and you too along with them! Enough chatter, let’s get in the water . . .”

And the boys jumped into the water. The cold river refreshed the boys even further, and they dove and splashed to their heart’s content. Moyshe-Itze, who was a natural swimmer, swam the crawl stroke, and other boys chased after him. Shouts echoed over the water, through air that was moist from the river spume. Standing up to his neck in the water, the Curly Prodigy called out thoughtfully, “Tractate Bava Kamma, the tenth page!”

This was a suggestion of how to resolve Yoshke’s fairytale trial. The quick-witted boys immediately caught his drift, and peals of laughter echoed over the surface of the river. “Wide Moyshe-Itze–Papa Bar Abba!”

Moyshe-Itze broke off his swimming mid-stroke. He shook his head to fling the water out of his hair and shoved his bangs aside. “Of course I’m the one who gets the princess,” he teased, “but you can’t dismiss the other claims so easily. Don’t forget the Tosafot on that page . . .”

Through this light-hearted repartee, the boys began to dissect the case about the princess. The Curly Prodigy’s suggestion was that the trial was analogous to a particular case in Tractate Bava Kamma (10B): “Consider the case of five people who are seated on a bench. If a sixth person comes along and sits down also, causing the bench to break, then the sixth person is at fault.” The passage goes on to explain that the sixth person is most likely hefty, a fat man such as the sage Papa Bar Abba, and breaks the bench due to his unusual weight. Therefore, the boys teasingly cast the blame on Moyshe-Itze with his wide shoulders and solid build. The Curly Prodigy made this suggestion in order to point out the principle that something that is accomplished through the efforts of several people must be credited to the last person, the one who made the decisive final contribution. However, in the case of the princess, it is not so simple to determine whose contribution was the most important . . .

The boys got out of the water and donned fresh undergarments in honor of the approaching Sabbath. They felt refreshed, clean, renewed–in a Sabbath mood. Their sharp boyish minds hungered for Torah, for the learning that holds the whole world in its embrace, from apex to nadir, as the sun illuminates both the highest mountain and the tiniest mote of dust. The trial over the princess had unveiled certain convergences of laws and principles–the boys now connected the trial to the Nesher passage, which was foremost in their minds. The afternoon of Sabbath Eve –a precious opportunity to refresh the mind with wide-ranging conversations about Torah. Under the surface of their conversations, the distant kingdom with its coveted princess rippled . . .

A high, reedy voice emerged from the tangle of conversation. Everyone turned to look. “Oho, it’s the Little Rebbe!”

Chaim caught sight of the boy, skinny as a beanstalk. His large curly sidelocks were damp and shiny, and dangled piously over the sprout of his beard. He was the image of his Hasidic ancestors, rejoicing on the Sabbath Eve after the ritual bath–his small boyish face was clear, his black eyes snapped with quiet, inward joy. He looked more than ever like a miniature rebbe.

The boys chuckled at the Little Rebbe, but they felt his dreamy joy slip over to encompass them as well. . . .