From Cincinnati to Austin and Atlanta to Denver, we were proud to collaborate with PEN America partners nationwide in activities to mark World Press Freedom Day. This day has been commemorated globally to focus attention on press freedom as a foundation for democracy, but now press freedom is under threat here in the United States, too. PEN America galvanized a community of press freedom advocates to stand up in support of independent journalism, defend journalists who speak truth to power, and encourage political leaders to prioritize safeguarding a free press—and will continue to mobilize year-round to protect this vital right.

Since 1993, the United Nations has marked World Press Freedom Day on May 3. In many countries it has been an opportunity to affirm the fundamental principles of press freedom, celebrate the positive impact journalism has on communities, honor journalists for their work to hold the powerful accountable, and stand up on behalf of those who have been silenced, imprisoned, or killed.

At a time when threats against the press in the United States are at an unprecedented high, PEN America is working to expand constituencies to protect press freedom and launched our first annual national campaign in celebration of World Press Freedom Day. In cities nationwide, PEN America Members stood with local and national partners to recognize that:

Journalists are under threat.
We are seeing journalists assaulted verbally and physically while reporting, put under surveillance, and even detained at the U.S.–Mexico border. Press credentials have been revoked or denied, and at least one state-level law has been introduced to stifle access to news media.

The United States now ranks among the top five deadliest countries for journalists, just behind Afghanistan, Syria, Mexico, and Yemen, and has been added to the list of the most dangerous countries for journalists for the first time. There were 35 reported incidents in which a total of 42 members of the press were physically attacked in 2018, These writers are also subjected to intense online hate and harassment, which disproportionately targets female journalists and journalists of color.

Millions of us are losing access to local news coverage.
Over the last 15 years, the number of reporters, editors, photographers, and other U.S. newsroom employees fell by 45 percent—and we anticipate more newsroom cuts will follow as news business models continue to be in flux. There are now some 1,500 “ghost papers,” where skeleton staffs are offering little to no local news coverage. And in some places, access to news has dried up entirely: More than 1,400 communities across the country lost a newspaper over this period.

We can’t take a free press for granted.
The United States does not place among the top 30 countries scored for press freedom in two different  rankings. For a country where a free press is protected in our very First Amendment, we have work to do.

Coordinated, locally-led World Press Freedom Day activities with PEN America Members and partners activated 10 cities nationwide. Writers and readers gathered in bookstores, literary festivals, and community centers alongside public officials, journalists, and activists to recognize the importance of protecting journalism and defending a free press—and celebrating the power of a free news media to elevate community stories and hold the powerful accountable. Inspired by PEN America’s Press Freedom Manifesto, we called on individuals to speak up to defend our free press and celebrate the positive impact of journalism.

In Atlanta, lawyer and activist Stacey Abrams delivered a keynote address on the intersection of press freedom and democracy, kicking off a discussion with Johnita Due, Vice President and Assistant General Counsel of CNN; Representative David Dreyer, District 59, Georgia House of Representatives; Mariela Romero, Regional Community Empowerment Director, Univision; and moderator Greg Bluestein, political reporter for the Atlanta Journal-Constitution.With the recent introduction of a highly problematic “Ethics in Journalism” bill in the Georgia Legislature, this timely event brought together leading state officials and members of the local media to highlight how an independent, robust free press supports civic participation and ultimately our democratic process.

In Cincinnati, CityBeat and the Society of Professional Journalists Greater Cincinnati Pro Chapter journalists and editors from news media outlets to discuss how a community’s stories are essential to build a resilient and representative free press. Councilman David Mann introduced the event by reading a proclamation declaring press freedom and local journalism a priority in the Cincinnati City Council.

In Denver, we gathered at Book Bar, a local independent bookstore, for a World Press Freedom Day Open Mic Night, highlighting impactful pieces of journalism shared by attendees. Featured storytellers included Dan Baer, former U.S. ambassador and candidate for Senate; Tameca L Coleman, singer and multi-genre writer; and Rowena Alegría, Chief Storyteller for the City and County of Denver who spoke eloquently about the loss of the Rocky Mountain News and her community storytelling initiative.

PEN America, which also campaigns for the freedom and safety of writers and journalists around the world under threat for their work, participated in the global World Press Freedom Day summit organized by UNESCO in Addis Ababa, Ethiopia. We brought 10 female journalists to the conference as PEN America’s 2019 World Press Freedom Day Fellows. These courageous women—hailing from Belarus, Brazil, Colombia, India, Kenya, Pakistan, the Philippines, Serbia, Turkey, and Yemen—have all witnessed horrific online harassment as a result of their work. We hosted a workshop defending against online harassment, sharing resources from PEN America’s Online Harassment Field Manual and exploring new ways to combat the scourge of abusive digital intimidation of journalists. 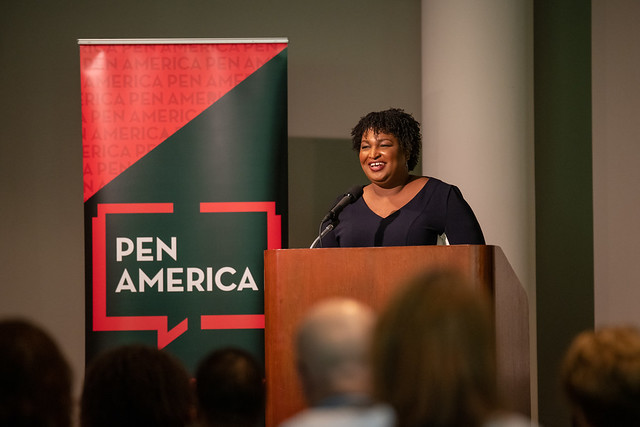 PEN America World Press Freedom Day Activities Across the United States:
Stay tuned for details about the following events. Don’t see one in your city? Plan one!

On the legislative front, PEN America drafted and worked with local leaders in city councils and mayor’s offices across the country to introduce and sign proclamations recognizing World Press Freedom Day in their locations. Proclamations were signed in Atlanta, Austin, Cincinnati, and Denver. At the state level, we worked with New York State Senate leaders, led by Senator Brad Hoylman, to draft and successfully introduce a resolution aimed at protecting press freedom. On the national level, PEN America partnered with sponsors in Congress in a bipartisan effort to protect press freedom locally and worldwide. In the House of Representatives, a resolution recognizing widening threats to press freedoms and affirming the centrality of a free press to democracy was voted out of committee to consideration on the House floor.

Defending a free press is a year-round imperative. Through our PEN Across America initiative, we will continue to celebrate and defend a free press, journalists—especially those working in our cities and communities nationwide—and the imperative of a free press for our democracy. Join us now, and for World Press Freedom Day 2020.