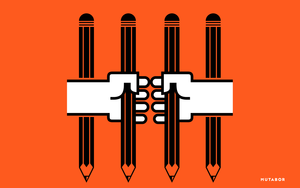 Bangladesh militant group publishes global hitlist
Ansarullah Bangla Team has issued a hitlist of secular bloggers, writers and activists around the world—including nine bloggers based in the UK, seven in Germany, two in the US, one in Canada and one in Sweden. THE GUARDIAN

Egypt releases Al Jazeera journalist
Mohammed Fahmy, a Canadian, and Baher Mohamed, an Egyptian, were among 100 prisoners whose release was ordered on the Muslim holiday of Eid Al-Adha. BBC

‘Foreign media welcome,’ China says. But the harassment continues.
For the first time in nearly three years, China will grant fresh work visas to two reporters from the New York Times. But the Wall Street Journal’s English- and Chinese-language Web sites remain blocked here, as do those of the New York Times, Reuters, and Bloomberg News. WASHINGTON POST

NYC Street Art Makes Statement for Human Rights in Iran
A half-dozen murals painted around New York City and New Jersey draw attention to journalist Maziar Bahari’s campaign for press freedom and educational access in Iran, where he spent 118 days in a jail after an appearance on The Daily Show. ASSOCIATED PRESS

Judy Blume and her battle against the bans
Blume, who has sold 80 million books and been translated into 32 languages talks of the “new, very protective” approach to reading that she is seeing more and more.
INDEX ON CENSORSHIP

Thailand may create new ‘Great Firewall’
General Prayuth’s cabinet quietly ordered the ICT and Justice Ministries and the National Police Department in June to set up a single internet gateway in order to control the flow of information into the country from overseas via the internet. TELECOM ASIA

Apple, Microsoft Press for Data Sharing Legislation
But the Senate’s only information-sharing bill, the Cybersecurity Information Sharing Act (CISA), is under siege from privacy advocates. THE DAILY DOT

A Faculty Unites to Champion Free Speech on Campus
American University’s faculty senate unanimously passed a resolution against trigger warnings, asserting that “As laws and individual sensitivities may seek to restrict, label, warn, or exclude specific content, the academy must stand firm as a place that is open to diverse ideas and free expression.” THE ATLANTIC