[VIRTUAL] Misinformation and the Election in Arizona: A #WhatToExpect2020 Town Hall 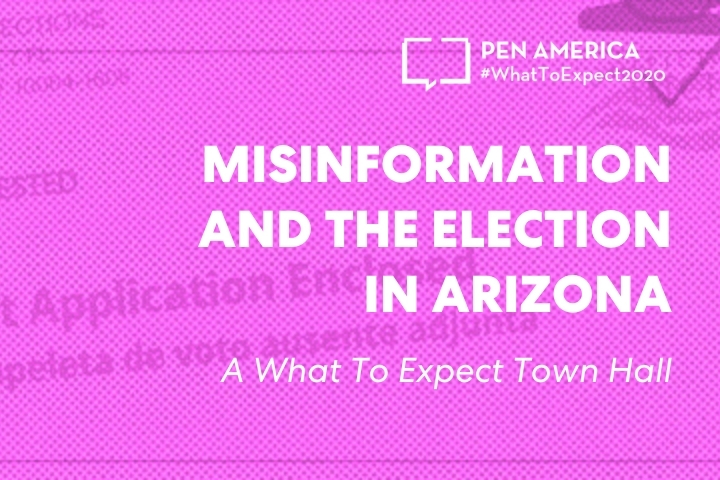 Join PEN America, Instituto, Mi Familia Vota Arizona, and Arizona Coalition for Change for a live town hall with community organizers in conversation about what voters in Arizona can expect from the upcoming November election. With misinformation being a constant threat, Arizona communities are relying on local and community news organizations, as well as voting rights advocates, to receive the most up-to-date and accurate election information. Join us to meet some of the journalists and community organizers doing this important work. If you plan to tweet about the event, follow us on Twitter at @penamerica and use the hashtag #WhatToExpect2020.

This virtual conversation is free and open to the public. We encourage community members to come prepared to ask journalists and election experts any questions about voting in the upcoming election in Arizona.

Cristina Calvillo-Rivera is the training and engagement director at Instituto, a nonprofit organization which focuses on building political power for low-income communities and communities of color across Arizona through a series of programs and offerings that help build capacity and supporting emerging and established leaders.

Eduardo Sainz is the Arizona state director for Mi Familia Vota. Born and raised in Sonora, Mexico, Sainz comes from a family whom installed values of unity, justice, and consistency. At the age of 13, Sainz migrated to Tucson, AZ with his parents and siblings with the hope for better education and economic stability. As a community organizer, he believes in order to change the political landscape in Arizona and the country, Latinos need to develop a political infrastructure through civic participation and leadership development. Through his past involvement in Mi Familia Vota, he has led large-scale voter registrations and get out the vote efforts in the state of Arizona by engaging thousands of volunteers and empowering families and leaders to speak out and take action in their communities. He also serves as a council member at the University of Arizona Hispanic Community Council.

Irene Franco Rubio is a devoted social justice activist and catalyst for change born and raised in Phoenix, Arizona. She has devoted her efforts to advocating for people of color through digital community organizing, intersectional movement building, and uplifting diverse voices. Irene is a young woman of color of Guatemalan and Mexican descent devoted to the movement for social change as a writer, young person, and change-maker.

Reginald Bolding is the Founder and Co-Executive Director at Our Voice Our Vote Arizona (OVOV) and the Arizona Coalition for Change (C4C). Reginald started in the movement in an unconventional way. Upon graduating from college, Reginald turned down a full-ride law school scholarship to become an English and Math teacher in South Phoenix. As a first-generation college student himself he wanted to help provide greater access and opportunities for students growing up in poverty. While teaching he saw an education system which systematically disadvantaged students of color and those living in low income communities. His passion for his students and community pushed him to run for a seat in the Arizona House of Representatives to help change those policies. He won election in 2014 and has twice been re-elected (2016, 2018) and now serves as the Arizona House Democratic Whip. He launched the power building groups, OVOV and C4C, to ensure our New American Majority communities are building independent political power to demand elected leaders tackle our nation’s most pressing issues. Since 2016, these groups have worked on elections and ballot measures to increase the state minimum wage, provide over $300 million in school funding, flip four state House seats, and help elect the first woman U.S. Senator in Arizona history.

As a critical voting bloc in various battleground states such as Texas, Florida and Arizona, Latino voters are being bombarded with misinformation ahead of November 3. https://bit.ly/3mkWzlV

Young voters need to be prepared to expect the unexpected this election season and persist to mobilize their communities to vote! Students can register now to rally the vote with PEN America next Wednesday 10/28 at 6PM ET: https://bit.ly/3dTAxUy.

Don't forget to register for Monday's event Be Heard. Be Smart. Your Voice Matters., an exciting panel with first-time voters on civic engagement, misinformation, and other important issues: https://pen.org/event/be-heard-be-smart-your-voice-matters. #WhatToExpect2020