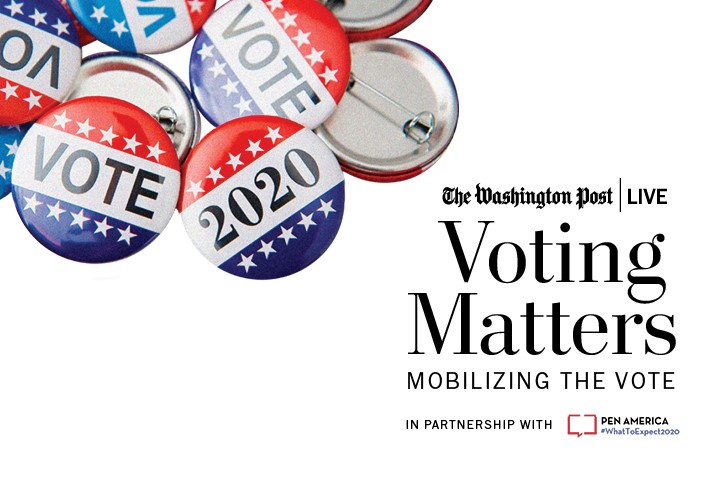 With just weeks until Election Day, PEN America will host the third virtual event in our partnership with Washington Post Live. “Voting Matters: Mobilizing the Vote” will spotlight the lawmakers, advocates, and entertainers who are working to get out the vote and encourage young Americans to become more actively involved in democracy. If you plan to tweet about the event, follow us on Twitter at @penamerica and use the hashtag #WhatToExpect2020.

Former Massachusetts governor Deval Patrick will discuss his work energizing the Democratic base and mobilizing people to get involved through TogetherFund PAC, a political action committee organized to address the challenges many Americans face including rising healthcare costs, low-wage jobs, and limited access to quality education—in turn motivating Americans to be more active citizens.

Zach Carothers and Eric Howk, members of Portugal. The Man, will discuss the band’s partnership with Headcount, a nonpartisan group that stages voter registration drives at concerts, executes fan-based texting campaigns, and more. Carothers and Howk will expand on the influence musicians and entertainers have in working to engage first-time voters and encourage young Americans to use their voice in the voting process.

Join the conversation on Friday, October 16 at 1pm ET. For information on previous events in the “Voting Matters” series, visit washingtonpostlive.com.

Deval Patrick has devoted his life to lifting the voices of others. Born on the South Side of Chicago, he grew up with his mother, sister, and grandparents in their grandparents’ two-bedroom tenement, much of that time on welfare. Through the love and support of family, great teachers, and adults in the neighborhood and in church, he became the first in his family to attend college and law school.

Patrick has always been called to service, whether in the public or the private sector. After law school, he joined the NAACP Legal Defense Fund, where he litigated voting rights and death penalty cases. Later in his career, he was appointed by President Clinton to lead the Civil Rights Division of the U.S. Department of Justice, where he was responsible for protecting a wide variety of federal civil rights and coordinated the investigation of arsons at Black churches across the South.

In 2006, completing one of the most extraordinary political journeys in state history, Patrick won a landslide victory to become Massachusetts’s first Black governor. Serving from 2007 to 2015, he used his time in the State House to pull together disparate factions to achieve lasting reform. As a result of his leadership, Massachusetts ranked first in the nation in student achievement, energy efficiency, healthcare coverage, and entrepreneurial activity. After ranking 47th in the nation for job creation under his predecessor, Massachusetts grew to a 25-year employment high and became a global center for life sciences, biotech, clean tech, and advanced manufacturing.

Throughout his service in public office and in the private sector, he has been a leader in developing solutions to the challenges we face together as communities and as a country: better education, climate change, healthcare, the future of work and innovation, and fundamental social and economic equity. TogetherFund is an extension of his vision of effective progressive leadership.